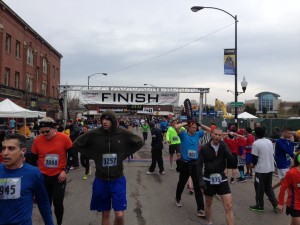 Breakdown:  Just before the starting gun went off on the eighteenth annual Ravenswood Run—a neighborhood favorite that, judging by the fact that it sold out last week, clearly attracts runners from all over the city—Fleet Feet owner Dave Zimmer reminded the roughly 3, 000 runners gathered at the starting line just north of Wilson and Hermitage that it’s been a “brutal, brutal Chicago winter.” He wasn’t trying to drudge up bad memories. In fact he was merely reiterating what a representative from All Saints’ Episcopal Church had just stated moments before in a pre-race prayer: “It’s been a long, hard, cold winter. And apparently it’s not done!” But both of these statements were code for something Chicago runners need little reminder of: “It may be forty-five degrees, but hey—it ain’t negative twenty!”

And it certainly ain’t. Forty-five may sound cold when you’re standing around, but for running it’s fairly ideal. And, despite a small chance of rain, the sky held out and allowed for nice cloud cover without the bothersome precipitation that often comes with it. With a course that snaked through neighborhoods in both Ravenswood and Lincoln Square—and even up Lincoln through the iconic Lincoln Square strip between Leland and Lawrence—the Ravenswood Run is as much a race as a celebration of neighborhood and neighborliness, as proven by the many spectators standing outside their houses sipping coffee and cheering on the runners.

A sense of camaraderie is one of the harder aspects to control for when putting on a race with so many participants, but this one manages to represent both the “neighborhood” aspect of its subtitle (Ravenswood Run: A Neighborhood 5K) and the high quality and organization of a big Chicago 5K. Weather is a big factor in any race and today’s weather certainly played into the success of this annual event but it’s the solid neighborhood vibe that’s kept people coming back for eighteen years.

Price: $40
Course: Like the updated course from last year, the course starts and finishes at the corner of Hermitage and Wilson after meandering through residential and business areas in both Ravenswood and Lincoln Square—including Lincoln Square proper. Water stations and mile markers (with race clocks) were clearly marked throughout the course.
Organization (gear check, etc.): Easy packet pick-up at all three Fleet Feet locations for the two days leading up to the race. The gear check line grew fairly long just before start time, but moved quickly.
Goodie Bag (includes shirt): The Ravenswood Run shirt is known for its quality and design and this year’s entry is no different, with two nice shades of blue (one for men, one for women) and a stylish cut. Not much else, though runners could pay an additional $10 for a pancake breakfast.
Weather: The temperature hung at forty-five with clouds threatening, but never delivering, rain. (Zach Freeman)