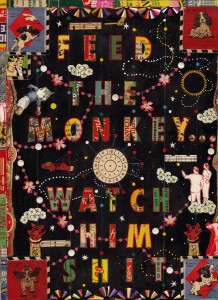 A funny thing happened at Sotheby’s a few years ago. The consumers in the rarified art marketplace met Occupy Wall Street. I wasn’t there, but from what I’ve gleaned from those who were, the OWS crowd showed up in support of Sotheby’s striking art handlers, Local 814 Teamsters. The august auction giant beefed up the security and escorted the bigwigs in under guard—and, as Dennis Miller once said, “It was the sharpest bit of choreography since the Oswald prison-transfer.”

The auction folk were shocked—shocked I say!—to realize that the art market, too, is considered a valve in the malignant heart of the One Percent. If you notice, I didn’t say “art world,” though one can make a fairly decent case that many of its inhabitants are also the dreaded One Percent. And you know what? The OWS folks are right: the OWS people as well as Local 814, the Teamsters striking at Sotheby’s for a living wage (or I should say a living in New York wage), could not have picked a better target than that atmosphere and that activity—the goosing, cajoling and casual brutality of the market mentality, i.e. rich imbeciles measuring their worth in the reflective glow of  art.

And the art world should get its head out of its ass and ask itself just how the fuck it got there.

I think fifty years ago, the artists would have been right out there in the streets with the myriad other folks, carrying signs and fighting back. Somewhere along the line we lost our compass. The work of an artist became about “career” and “career path,” and we forgot that the creative world was part of the larger world. And that art-making, if you’re doing it right, is a thing of the spirit.

Art people turned from scholarship to the marketplace. A good curator was no longer about who knew the most but who could raise the most money. Museums started seeking out CEOs rather than scholars. To its credit, the Art Institute of Chicago reversed this idiotic trend a few years ago by selecting a solid “art man” in its appointment of Douglas Druick, rather than a human cash register. A longtime curator at the museum, Druick had decades of impeccable scholarship under his belt. Let’s hope other museums take the hint.

By all accounts, the Sotheby’s honchos were terrified at the prospect that some Adam Lindemann or Dakis Joannou-type might encounter any unpleasantness with the great unwashed out in the street. So Sotheby’s did what the One Percent always does to protect its interests: it sent men with guns.

Afterwards, the firm twittered itself silly boasting of the most profitable number ever fetched for a Clyfford Still painting; did they think the striking art handlers weren’t going to see that? Somehow, saying that they called the police doesn’t quite define it in this discourse; when big business is pushed back—and make no mistake, Sotheby’s is big business—they send in men with guns. Just like Halliburton. Just like the railroads and their Pinkertons a century ago.

Thirty years ago, we had exhibitions like “Artists Call,” created in protest against U.S. incursions into Nicaragua and El Salvador; the artist as an agent of social change seemed alive and well. And then the 1980s happened. The culture of “celebrity artists” began in earnest.

The demonstrations at Sotheby’s were a morning-after moment, the place the market and fashion creeps have led us to. We have the art world we deserve. Consider gallery shows, where our artist makes a body of work and, over this group of work, completes some thoughts? Those seem to be over with. Now it is Kmart without the flashing blue lights—art fairs. Where the art is an after thought at best, cultural and lifestyle accoutrements for wealthy , mouth-breathing nitwits who love slumming  it with the “artsy” crowd.

If you’re wondering where artists lose their definition? Art fairs are a good place to start looking. If you long for the discourse to be about something rather than the market possibilities of works of art? Where the discussion is about what a work of art is, rather than what its cost? Are you not sick of the same old “feed the monkey, watch him shit?”

Burn it down. Really…broom these motherfuckers. Make art they can’t sell. Make the art that opens your heart.

I watched Vik Muniz‘s towering and humane “Waste Land” on cable, wherein Muniz helps people who are working in a mountain of garbage cull beauty and meaning from that which surrounds them, helping them gently realize the transcendent moments in their own lives.

When it ended, I was near tears and moved beyond words. Right at a time that I’d felt artists had forgotten how to engage and include the world in their work, the Muniz film restored my faith a bit. In a mountain of garbage, he elevated dirt-poor people out of ferocious loss and despair.

It can be done.

Some years ago, I participated in the first New Orleans Biennial, Prospect 1, wherein curator Dan Cameron did much the same thing, lifting that beleaguered city’s art community into celebration and renewal against formidable odds—namely, the city of New Orleans’ political structure, which barely lifted a finger in its own best interests. Prospect 1 changed the way I thought about what artists can do for a community—and what, regrettably, we’ve not done.

The Occupy Wall Street movement was a wake-up call. We can play tag-ass in the art world, or we can be part of the larger conversation which wants badly for the participation of our community of artists. Who knows, we might even learn something.