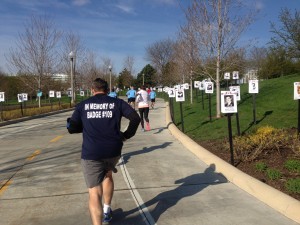 Runners near the finish line during the Run to Remember/Photo: Zach Freeman

Breakdown:  “There’s great awards!” declared the race announcer a few minutes before the tenth annual Run to Remember kicked off at eight this morning. “Well, there’s good awards, ” he amended quickly with a laugh. “I hate to oversell.” But aside from this comedically retracted overselling of the awards, nothing else about this quickly growing annual race supporting the Chicago Police Memorial Foundation (at more than 5,000 participants, this was officially the largest showing to date) was overstated or oversold.

Starting and finishing near Gold Star Memorial Park just east of Soldier Field, this year’s race boasted much tighter organization than previous years, with clearly marked pace groups, plenty of course support and the signature bagpipers playing before, during and after the race. Most impressively, a police helicopter was on hand, flying back and forth over the Lakefront course during the race and making an especially memorable low pass just as the singer of the National Anthem held the high note in “free.”

For such a large field there was a remarkable amount of space along the open course, most likely because so many participants chose to walk. After a decade, this race has really come into its own, adding runners as the popularity of running increases, while still staying true to its roots of honoring the memory of fallen officers. “That is the primary reason we are here today,” a race announcer reminded runners at the starting line, and photos of those officers lining the last quarter mile of the course really drive that point home.

Price: $35 pre-race, $45 race day
Course: This is an open course on the Lakefront Trail (and a much smaller race was heading south as we were heading north) but the early start time allows for a fairly clear course. Starting and finishing near Gold Star Memorial Park with a post-race party on the sidewalks around Soldier Field is a welcome racing experience.
Organization (gear check, etc.): Volunteers handed out plenty of water, Gatorade and Muscle Milk after finishing, along with oranges, bananas and bagels. Gear check was small but moved quickly and the organization of booths was easy to navigate. Pre-race packet pick-up at Chicago Police Education and Training Academy was a snap, as was race-day registration and pick-up.
Goodie Bag (includes shirt): A tasteful, light-blue running shirt and some paper flyers inside a nice, reusable gear check bag.
Weather: Right around fifty degrees and sunny. The wind could have let up a bit but otherwise it was perfect running weather. (Zach Freeman)