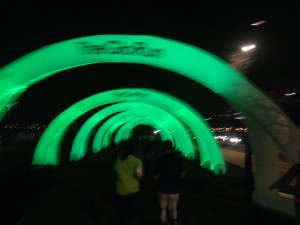 Breakdown: “Where the eff is the start line?!” the DJ-cum-race announcer confusedly queries the throngs of brightly clad race participants. No one seems to know. “Oh, ” he says, gesturing broadly to his right, “To my left!” This is the way the Glo Run—a nationwide, multi-location, nighttime rave party 5K—gets started in Chicago on a Saturday night. As thousands of runners and walkers make their way to the crowded starting line at the south end of Grant Park, the DJ is wondering aloud, “Who’s got the craziest dance moves right now?” In short, this is much more rave than race.

Still, as much as the type-A runner within me wants to cynically dismiss this event as unorganized—especially after waiting over an hour for pre-race packet pickup the night before at Fleet Feet, there’s a party-like atmosphere that permeates every part of this race (at the starting line, beach balls start bouncing around above the crowd like we’re at a music festival), not least of all because the people I’m lined up with at the starting line are not really there to run; they’re just there to do something fun on a Saturday night.

Unlike the Firefly Run—a race with a similar concept that I ran last year—the Glo Run includes a number of glowing, pulsing, music-blasting set pieces to run through along the open course and also managed a slow-moving but serviceable gear check (volunteers were not having an easy time finding numbered bags in the dark). I could list the reasons why runners might not rush to sign up for this rather gimmicky lakefront run (no chip time, an extremely crowded course and starting chute, high entry fee), but I can hear the several-thousand strong crowd chanting along with Icona Pop at the massive post-race party: “I don’t care! I love it!” There’s something to be said for an unabashedly good time.

Price: $50
Course: An open course on the Lakefront Trail at night with such a large crowd can be a risky thing, but Saturday night it seemed like those who came to run dashed ahead pretty quickly and got a quiet racing experience. Meanwhile the majority of participants strolled along at a slower clip, taking in the impressive tunnels of light and music along the course.
Organization (gear check, etc.): Pre-race packet pickup on Friday was a huge, disorganized headache but those who procrastinated and picked up their packets the day of the race had a much smoother experience. Gear check was also a bit slow but the DJ kept the post-race party going, transitioning songs from fare like the recent DJ Snake and Lil Jon anthem “Turn Down For What” to Lou Bega’s late-nineties hit “Mambo No. 5.”
Goodie Bag (includes shirt): A choice between a rather nondescript grey or pink cotton t-shirt along with some glow sticks.
Weather: A pleasantly cool May evening in the low fifties. (Zach Freeman)