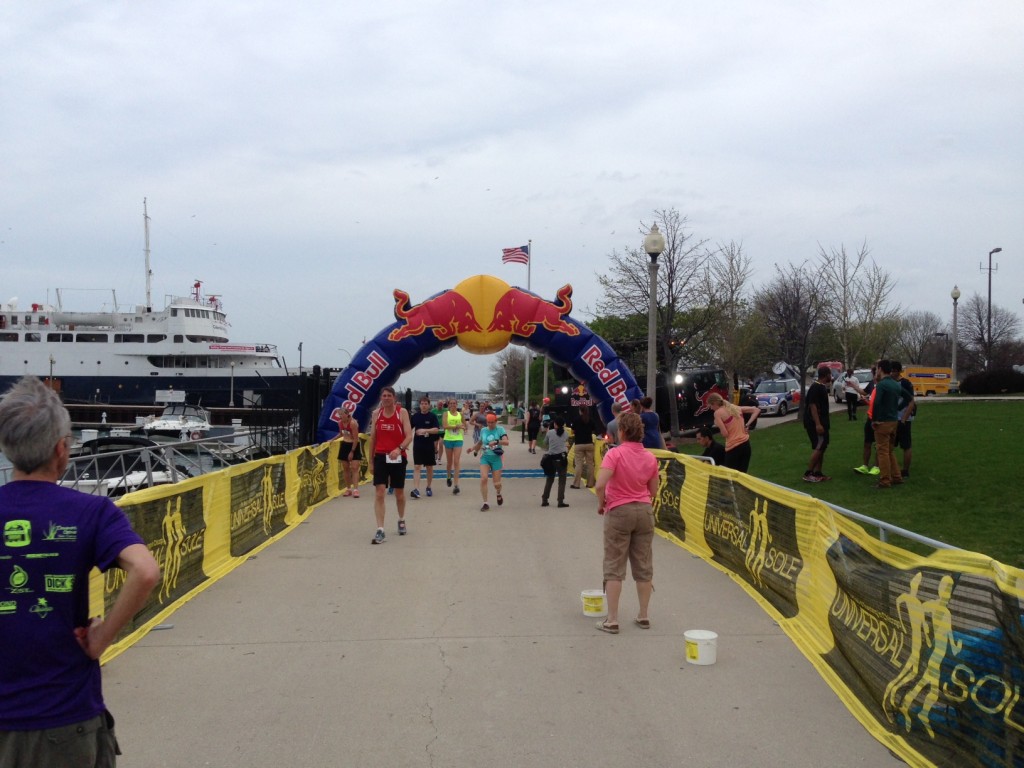 Breakdown: Before the Universal Sole Four Mile Classic could even get started Thursday evening, a particularly strong gust of wind grabbed one of the covered tents from the basecamp, picked it up and tossed it over the starting line and directly into Dusable Harbor. After gazing into the water for a few seconds, race announcer (and Universal Sole owner) Joel Feinberg remarked into the mic, “Well, that tent’s a goner.”

Starting and finishing under a giant Red Bull arch in Dusable —home of the tent-swallowing waters—the northerly wind was an obstacle on the out half of this out-and-back open course along the Lakefront Trail, but it was a motivator on the way back, pushing runners to the finish line. The relatively compact basecamp consisted of a gear check, a timing-chip pickup booth and a massage tent (Muscle Milk and Red Bull were passing out free samples). But lest runners think this was the entirety of the race package, a large-scale post-race party took place inside the Lakeshore Sport & Fitness mega-gym with pizza, casserole, beer and other goodies.

Like some other Universal Sole races—the Burgers and Beer 5K comes to mind—the Four Mile Classic has the aura of a low-key race put together by runners for runners, low on frills but heavy on having a good run and celebrating afterwards. This race is still relatively small and finding its footing along the lakefront but it won’t be long before more runners catch on.

Price: $40
Course: This open course got a little crowded around Museum Campus (particularly when circling the Aquarium) but letting runners skip the hill at the south end of Monroe Harbor on the way north was a kind gesture.
Organization (gear check, etc.): Things were well-organized but a bit too spread out with race-day packet pickup taking place in the Universal Sole store, timing chip pickup in a tent near the starting line and the post-race party at Lakeshore Sport & Fitness. The semi-scavenger hunt style of moving from location to location was fun but some consolidation might help.
Goodie Bag (includes shirt): A topnotch green running shirt and one of the most generous post-race parties in recent memory. (All-you-can-drink 312? Yes please.)
Weather: Strong winds were welcome as they tamped down the evening heat. (Zach Freeman)