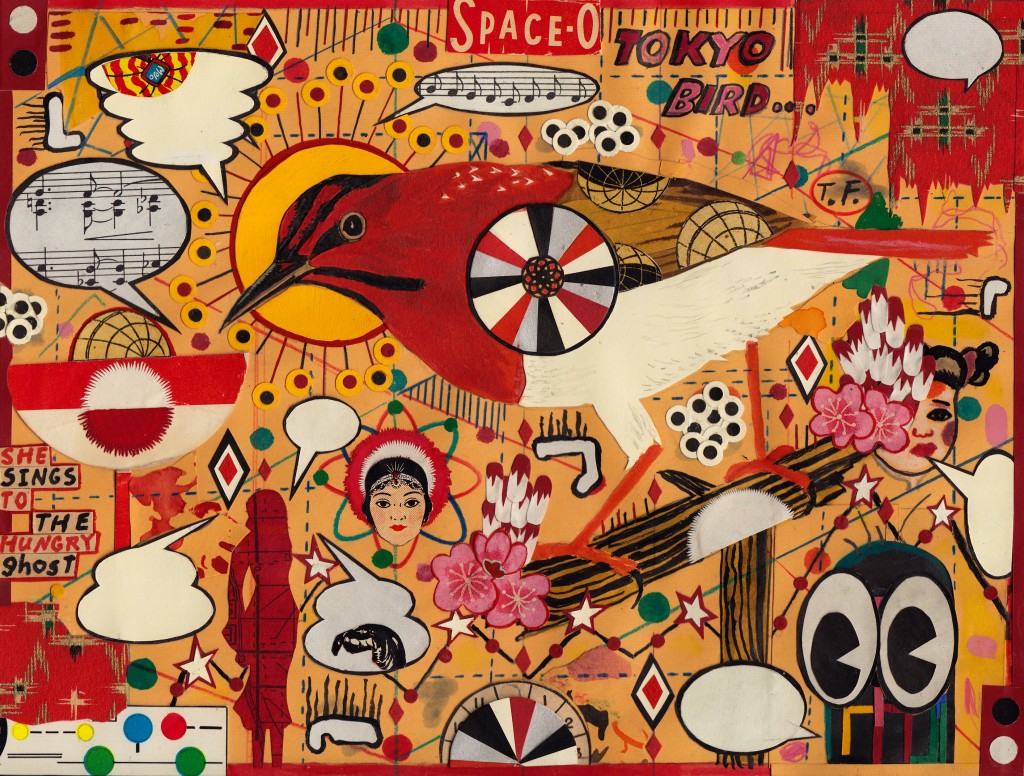 Some years ago, I visited Tokyo with the filmmaker John McNaughton. It was one of those experiences that has stayed with me and opened my mind to Asian literature and art, and broadened my view of the world. It also made me aware of the long lens with which the East and the West view each other. How little we know of each other and, oddly how alike we are. These are some of the thoughts I still have about this trip.

Li Po has been the best-known Chinese poet in Asia for about the last thousand years. He was a huge influence on the haiku poets, and is credited with being the seminal influence in the idiomatic languages of poetry and specifically, haiku. He was one of those wandering, searching poets who worshipped nature. Much like the Japanese haiku monk and poet Basho, who would be born a thousand years later, he was so great a poet that there are volumes of poems by other poets proclaiming their devotion to him—

Today I laid bare before you
all things stored in my heart.

—such as these final lines from an anonymous poet in a verse dedicated to Li Po. His poems are like an electrified arcing kite-string connecting him and Basho to modernist poets like Ezra Pound, who was profoundly influenced by the writings of the Chinese poets of the sixth and seventh centuries, but in particular, Li Po.

One must remember that Li Po was a poet of what was considered the cultural age of enlightenment in China; the 300 years or so that constituted the Tang Dynasty. The greatest artistic attainments of this age were poetry. There were no playwrights or novelists, only poets; and there were poets up the wazoo. You couldn’t swing a cat without hitting one of the fuckers. As the saying goes, “If there was a man, he was a poet.” The Chinese held poetry in very high regard, and Li Po was the best of the best back then. When one reads Basho, one cannot help but realize the restraint and acuity of Li Po hovering over the totality of Basho’s output.

That Basho was Japanese and Li Po Chinese and were separated by a thousand years does not deter the idea of these two spirits being distant mirrors of the other.

My friend Beth Keegan taught Chinese for years at the Latin School and she is forever correcting me on the pronunciation of Li Po’s name. She pronounces it “Li BOUGH” and enunciates the second syllable as if it were two. Those who revere Chinese and Japanese writing are very protective of it. After reading Li Po, and Basho, I get it. They are cultural treasures that, regrettably, nobody gives a fuck about any more. It’s a shame. There is such joy and earthy gratitude in Li Po’s, “To Tung Tsao-Chiu.”

And comelier still are the green eyebrows when the new moon shines.
The beautiful girls sing anew and dance in robes of thin silk.

Li Po liked to get hammered on wine and write poems. His “Exhortations” (there were many) find their modern counterpart in poems like Baudelaire’s “Get Drunk,” in which the poets celebrate life’s rich bounty of wine, words and love. Li Po was not adverse to what he called “reckless revelry,” which is not to say he was not serious about anything. He, like Basho, was very devoted to nature and would tear up at the sight of the constellations. He was a sensualist and spent many days and years by rivers and under the stars. He was in awe of all of it. In his poems, he would state, “We never grow tired of each other, the stars and I.”

When you look into the ponds found in many Japanese parks and shrines there are always koi and carp. From time to time you’ll spot an almost translucent white carp, an albino of sorts, gliding like an aquatic white ghost. Japan and Asia, for that matter, are fairly lousy with ghosts. One of the most haunting spook stories is that of “The Hungry Ghost.” It pops up in Thai, Chinese and Japanese folk-tales and ghost stories. It goes that if one has led an unscrupulous life, he, or she, is doomed in the after-life to roam the world as a hungry ghost for 800 years. The Ghost is said to have a mouth so small that no food can fit in it. I’ve heard this story, or variants of it, many times. To wander, hungry, is thought to be the worst of fates. Perhaps this is because, all over Asia, starvation is a very real-world problem. In all of these folk-tales and parables, hunger is akin to madness.

My last night in Tokyo, I wanted to see a baseball game. Luckily, the Tokyo Yakult Swallows were hosting the Hiroshima Carp at Jingu Stadium. It was a beautiful night for a ballgame and Jingu Stadium has the feel of an old-time ballpark; the kind where people go to watch the game, instead of each other. There are no skyboxes or hundred-dollar box seats or any of that kind of horse-shit. It is a real ballpark.

There are a surprising number of Americans on both teams and one wonders how they wound up here. It is a different game in Japan. It is the very definition of “small ball;” the emphasis being on playing like a team. Hit to get on base. The most valuable players in Japanese baseball are the guys with the highest on-base percentage. There are also a ton of women fans here; not girlfriends who got dragged to the game, but real baseball enthusiasts who wear the hats and bang the plastic bats together with a rabid alacrity.

McNaughton and I are the children of lifelong White Sox fans. Both of our fathers dutifully followed the Sox their whole lives without ever seeing them win it all. The closest they came was in 1959 when they lost the World Series to the LA Dodgers. We discussed our fathers in the cab on the way to Jingu Stadium. It seems like we almost had the same father; both men being hard to please and somewhat suspect of their sons’ chosen career paths. One of the reasons I came to Japan is my father having fought in the Pacific in WWII. He invaded Okinawa and witnessed a bestial, awful battle that forever colored the way he thought of the Japanese. I wondered, really, what this place was? Our countries did grievous injury to each other almost sixty-five years ago. Who are they now? And who are we?

Part of the answer came to me that night. A man sitting next to us was wearing a Carps hat and, after a bit of conversation, told us the Carps were his hometown team.

I’m not used to thinking of Hiroshima as a place where people live, a community, but rather as the exclamation point of our war with Japan. Hiroshima was an action, not a place. Yet here we are, on a warm summer night in Tokyo talking with another baseball fan about our teams. He asked us about the Cubs. Of course we said “Fuck NO!” and he laughed. We explained that we were real baseball fans: White Sox fans. On this night, almost three-quarters of a century after our country tried to erase this man’s city from the earth, I met a guy from the town of Hiroshima. He’s lived there his whole life and he likes baseball. He comes here for the same reasons I do; to try and remember what is good about where we live and who we are.