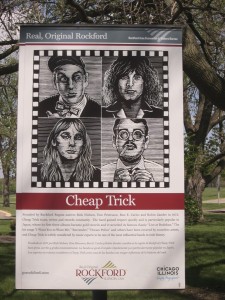 “Rockford could be fun,” said the editor of this magazine when I proposed writing a travelogue about the Forest City. “I mean, who goes there?”

Actually, there are plenty of reasons to visit Illinois’ third-largest city. I’d been to the area earlier this spring to play a gig at Pig Minds, a quirky vegan brewpub in nearby Machesney Park. We camped down the road that night in Rock Cut State Park, which feels surprisingly spacious and wild, considering it’s only a couple miles square and located just outside of Rockford.

Despite this foray, I’d never explored Rockford proper until a couple weekends ago. That’s odd, since it’s the home of power-pop legends Cheap Trick, and their magnum opus “In Color” is one of my favorite albums of all time. Oddball guitarist Rick Nielsen, known for his flipped-brim caps, checkerboard-patterned threads, and multi-neck axes, still lives in the city and is one of its most ardent boosters.

“I love Rockford,” Nielsen says in his four-page spread in the town’s official visitor guide. “This is where my friends live, this is where my family is from, where I got kicked out of band in junior high [for calling the teacher an ‘incompetent, drunken fool’]. It’s home.”

In the twentieth century, this town of some 150,000 residents along the Rock River became an industrial powerhouse, with its role as a tool-and-fastener manufacturer earning it the nickname Screw City. Local innovations included the garage-door opener, the dollar-bill changer, Testors model kits and Nelson Socks, the red-heeled stockings used to make sock monkeys. 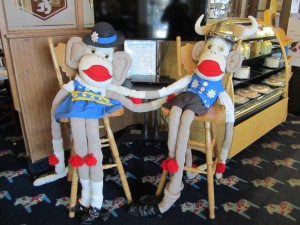 For my pilgrimage, I catch a Van Galder bus from O’Hare. The trip to Rockford costs $21, plus $10 to stow an unboxed bike in the cargo hold. An hour and fifteen minutes later, we arrive at the Rockford Clock Tower, a local landmark about seven miles east of downtown. I pedal downhill toward the river on State Street, a busy five-lane, mostly without shoulders, that’s unfortunately the only direct route downtown.

Laotian food, which is hard to find in Chicago, is relatively common here, so I stop to sample some at Bamboo, a Southeast Asian restaurant on State a few blocks east of the river. I try Laos-style beef jerky, and nam khao, a crispy rice salad made with fermented pork and coconut, which you eat by wrapping the mixture in a lettuce leaf.

The restaurant is in the East State Street Corridor, a hipster-friendly enclave. I grab a whiskey at the Irish Rose pub, which has photos of Wilde, Yeats and Joyce on the walls and Bowie’s freaky “Moonage Daydream” on the sound system. There’s also the Carlyle Brewing Co. brewpub, and the Rockford Art Deli, a screen-printing business and gallery that sells t-shirts with cheeky slogans like “Rockfordians do it better,” and “Rockford doesn’t suck, you do.” 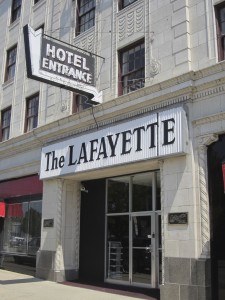 As recommended by Nielsen in the visitor’s guide, I visit the Kryptonite Lounge, a scruffy rock club in the center of the city’s quiet downtown, decorated with a mural of James Dean and a giant lava lamp. The Bandulus, a soulful ska band from Austin, Texas, is laying down hypnotic grooves. Afterwards, I sleep around the corner at the historic Lafayette Hotel, It’s a bit careworn, but not without retro appeal: my room features faux stone walls and an electric fireplace.

In the morning I cruise around checking out beautiful old buildings downtown, including several vintage music halls. The Coronado Theatre, built in 1927 and restored to its former glory in 1999, features over-the-top gilded, arabesque décor. Nielsen, one of the backers, has his own seat in the balcony, upholstered with his trademark checkerboard pattern.

Peckish, I cruise a few miles east of downtown to the Stockholm Inn, a huge Swedish restaurant where a pair of giant sock monkeys in traditional Viking garb stand guard over the gift shop. Nielsen is an investor here as well. After fueling up on Swedish pancakes with lingonberry jam, I strum the strings of one of his guitars, emblazoned with the Swedish flag and hanging by the front door, for good luck. 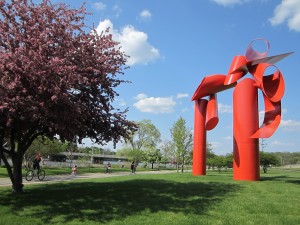 I roll back downtown, then head north along the Rock River Bike Path, located on the east bank, filled with people strolling, jogging and cycling in the gorgeous weather. I pass by “The Symbol,” the iconic orange sculpture by Alexander Liberman, which looks like a kid brother to Alexander Calder’s “Flamingo.”

The last stop on my Forest City sojourn is the Anderson Japanese Garden, located near the north end of the trail. This tranquil twelve-acre green space puts Chicago’s modest Osaka Garden to shame. As I stroll around the two large ponds, admiring the lush foliage, elegant wooden buildings, rushing waterfalls and colorful carp, serenity washes over me.

Since it’s such beautiful biking weather, and a Metra weekend pass is $24 cheaper than a return ride on the Van Galder, I opt to pedal thirty miles, largely on trails, to the Harvard, Illinois, Metra station for the return trip. A few hours later, I’m relaxing onboard with a cold brew. I’m sure it won’t be long until I “Surrender” to Rockford’s charms once again.

John you went to Rockford! The article made me smile. All things were true. Thanks for sharing about my hometown.
Blessings,
Karissa