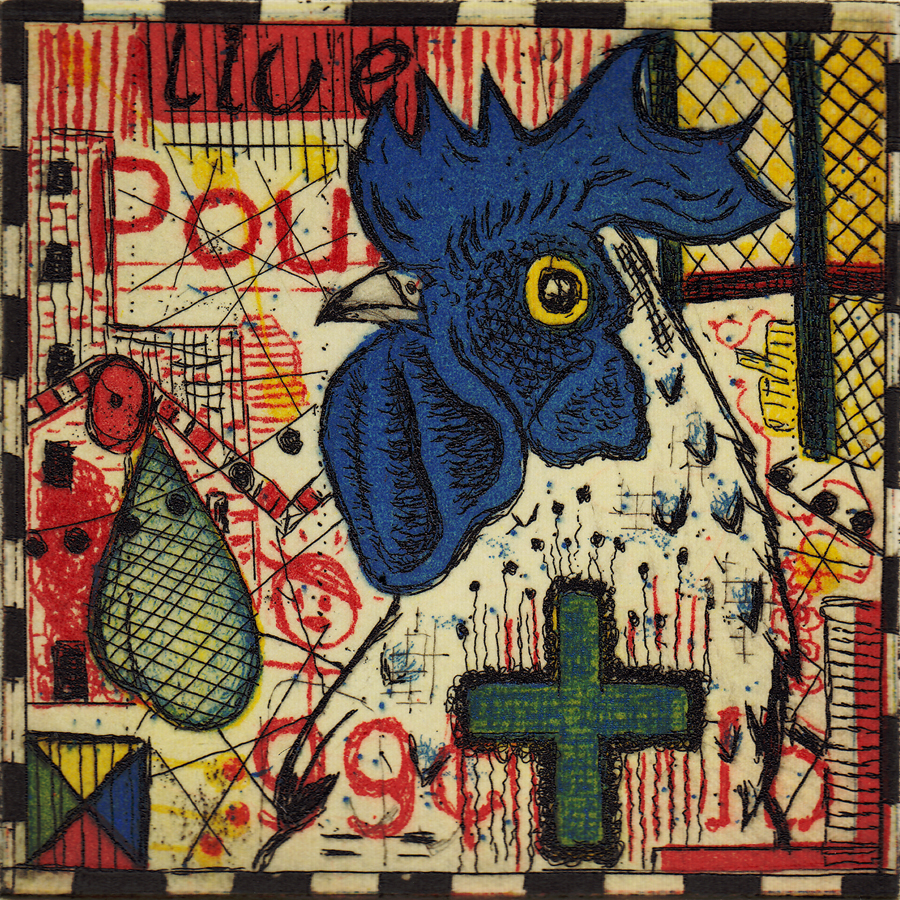 All over the West and South Sides of Chicago there are still live poultry shops. It only now occurs to me that I’ve never actually been in one. Americans are particularly squeamish this way—we never want to look the creature we’re about to slaughter in the eye. We’d rather see it fried with some biscuits and gravy on a plate, or in nugget form in a small styrofoam box or, even better, chopped up with a bunch of vegetables in some soup. We’re not much for the blood and the feathers and the screeching death that comes along with butchering poultry.

A number of people have begun to keep chickens in their yards in Ukrainian Village to raise their own eggs and I have to admit it is kind of heartening to see a plump chicken or two walking the alleyways. You want to warn them that feral cats, large rats, raccoons and now coyotes also walk these alleys, and would gladly feast on them. But then you notice these are some big-assed chickens and when you get right up close and look them in the eye you see all of the madness in the world. These chickens are Chicago chickens and they just might be able to hold their own.

Years ago when I first opened my studio on Damen Avenue, there was a small bodega a few doors down from me. The older Puerto Rican guy who ran it made change out of his pocket, rather than the cash register. The store was badly stocked and open when he wanted to be and closed at odd hours. We struck up a friendship by virtue of being neighbors and sometimes having to look out for the same goofs who would run in and grab stuff when you weren’t looking. We were also the only Sox fans in that part of town. I liked him; he had thick bifocals and a sad smile and spoke the kind of English that one speaks when they learn it first in Chicago. He referred to the Alderman as “Our Guy” with a roll of his eyes.

I only knew  him as “Popi.” One day I noticed these polaroids taped to the side of his antique cash register. They were all pictures of roosters—more specifically, fighting cocks. He told me that in Puerto Rico he’d raised many champion birds. He said where he came from people weren’t  hypocrites about things like cockfighting. He’d tell me,”You gringos get all weepy about two chickens fucking each other up—WHILE you eat your McNuggets.” He had a point.

He also once in a while would stop me in my tracks when this line of conversation occurred. He would ask me if we cared as much about people as we did about the chickens: “There you go—white people will wring their hands over cockfighting, where each bird has a fifty-fifty shot at coming out alive, but kids in this city are blowing each other’s heads off  for dime bags and where are your tears for them?”

Bucktown changed and the bodega is long gone, as is Popi and his backyard full of fighting cocks. There were a few of them that were  beautiful in a wild, mad, kind way: Rubio, a starkly black, long-plumed bird with a blood-red head; Pinto, a speckled mess with sharp thorny spurs; and Azul, who Popi explained was a rare blue-faced gamecock he’d paid better than a grand for back home. He fed them only prime feed and fought them in Indiana, he said, “with a bunch of white guys who look like a dumber version of you.” It was nice to know that somewhere out there there is a dumber version of me.

I guess what has changed about Bucktown the most is the absence of people like Popi and the fact that I used to walk my neighborhood and sometimes hear three or four different languages being spoken in the length of a couple of city blocks. Now there is a Marc Jacobs store and restaurants that people blather on about on Yelp all the time. I’m old enough to know that this isn’t bad or good, that change is the human experience. I don’t miss the days when you had to look over your shoulder in this neighborhood; though judging from the gun violence, you still kind of have to. I do realize that in very short order, it is a different city. That for all of the technology that was supposed to connect us, it feels like we are more alone. For all of the cameras and crime-prevention gestures and feel-good documentaries, we are still apt to maim and kill each other.

It has always been a cruel city. It is our history: steel, slaughter, railroads and bootleggers made the cash register ring and this was the only music anybody with any power danced to.

Popi was right. We’re still killing each other in Chicago over dime bags and still wringing our hands over smaller cruelties. Everything has changed, and everything remains the same.