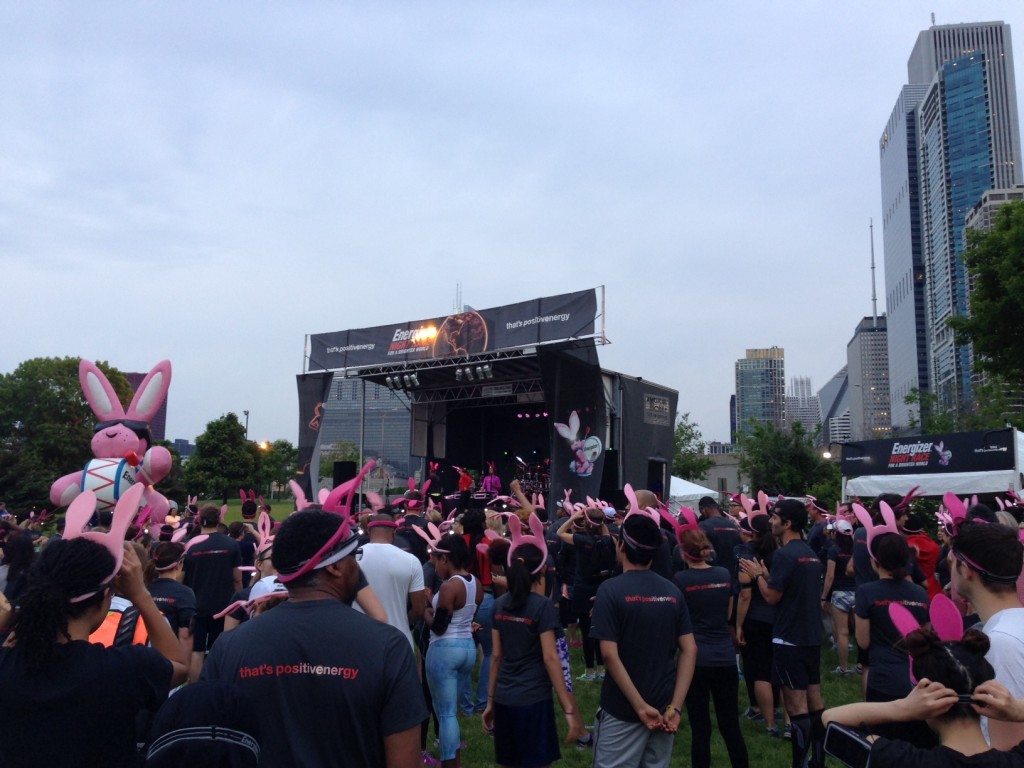 Breakdown: Despite this race’s title (and a gigantic inflatable pink bunny situated near the stage at basecamp), there was a distinct lack of staid corporate vibes at last night’s Energizer Night Race for a Brighter World. As participants gathered near the stage in Dusable Harbor—many sporting pink bunny ears and the Energizer headlamp included in the race packet—the race announcer quipped that some unsuspecting walker on the Lakefront Trail would see 900 pink rabbits running toward them and be reminded of their last trip on LSD. “Whoa, ” the DJ jokingly admonished. “This is a family race!” “Right,” the announcer joked back. “I’m talking about their last trip on Lake Shore Drive!”

There was also a lack of jockeying for position near the starting line, despite nearly a thousand runners queuing up for this 5K for “families and young adults.” Night races are known for being a little less competitive than morning races but without pace groups things can still sometimes get pushy; this one sported a remarkably jovial group of runners and walkers.

The race kicked off around 8:10pm, once the sun had set but before darkness had fully settled in. Combined with the bunny ears, the headlamps provided a cool visual but didn’t necessarily illuminate the path in the dusky light—but waiting for it to get darker would have been an unnecessary delay. Finishing back in Dusable Harbor to the thumps of the DJ (which eventually gave way to a live band), runners gathered to dance, drink (beer was for sale at $5 a cup) and enjoy the view of a bunch of runners who just kept going and going and…

Price: $35
Course: The course—heading south from Dusable Harbor to Museum Campus and back—was open but relatively clear and very plainly marked and monitored. A DJ around mile one kept runners motivated and volunteers passed out plenty of water to stay hydrated in the cooling summer evening.
Organization (gear check, etc.): The only delay I witnessed was with day-of packet pickup at Universal Sole in Lake Shore East Park, mainly because the shape of the store doesn’t lend itself to long lines of people. But even this line moved quickly and the race itself was expertly run.
Goodie Bag (includes shirt): Very impressive. An Energizer headlamp, a Schick Hydro 5 razor, a free pass to the Navy Pier IMAX and a bottle of Banana Boat sunscreen were included in the goodie bag (which itself is a very sturdy gear-check bag) along with the surprisingly stylish dark grey Nike dri-fit running shirt. After finishing, runners were given a Kind bar and an Energizer LED carabiner clip light as well.
Weather: Rain was predicted but thankfully held out till much later in the night, allowing for a perfect evening on the lakefront in the low seventies. (Zach Freeman)