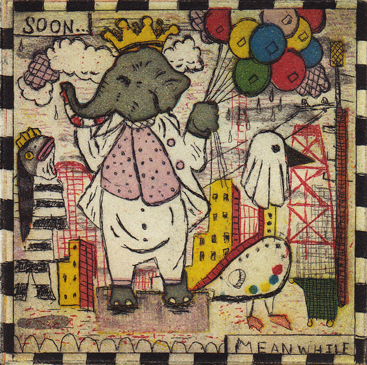 There was a time when Donald Trump was easier to ignore. A squinty, arrogant, ego-driven billionaire, with a head full of piss-colored cotton candy. A Dope with more money than brain cells and an ambitious libido with a taste for model types. He was easy to laugh at and he was New York’s cross to bear—not ours.

His idiotic television show sought to breed mini-me versions of “The Donald” and damned near everyone who was on it was as detestable as he is. I caught it once, years ago, when Trump brought a dozen of these “Apprentice” drool-cases over to meet the late George Steinbrenner at Yankee Stadium. Steinbrenner, a convicted perjurer and member of Richard Nixon’s creepy inner circle, being Trump’s idea of a role model.

It was your usual verbal mutual kneel-and-bob session with two rich white guys standing across the room from each other, pointing both index fingers at one another and declaring: “You’re a WINNER, George” and then “No Donald, YOU’RE the WINNER, and these young WINNERS will learn from a great man like you.”

It would make one ill were it not so achingly funny. They were practically talking each other off.

Then I realized it isn’t so funny, that the whole country would have been done an invaluable service had someone locked the door after rolling a couple of grenades into Steinbrenner’s office. The world would have been spared a baker’s dozen of avaricious assholes who use Preparation H for lip gloss, and two delusional billionaires.

Now the goof wants to sign our city. He wants to slap his name on the world’s most beautiful skyline.

If we were going to write a name in the skyline, why not one that resonates with the narrative of the city itself? Here are some ideas: Terkel, Algren, Royko, Alinsky, Addams, Sandburg, Washington (as in Harold), Arvey, Mikva, Wright (Frank Lloyd and Richard), Sullivan, Marovitz, Sadlowski, Despres.

It isn’t like Chicago has a shortage of billionaires; we have the Pritzkers who’ve used their wealth and influence to support charities, the arts, hospitals—you name it. We also have the Luries, who built the Lurie Children’s Hospital. You’ll notice that when our billionaires attach their name to something, it is for the public’s greater good. As big cities go, we’ve been fortunate that our billionaires have been largely very involved in civic life and bettering the condition of our city and its citizens.

I’m not often the guy who extolls the largesse of the wealthy, but in Chicago, we  mostly have a good bunch and once in a while, somebody (meaning me) ought to say it.

Trump has never gotten it, even when he was toe-dipping with the idea of running for president. He is merely the team mascot for the one percent, the Benny the Bull of billionaires. A man who was born on third base and thought he hit a triple. One of those delusional greed-driven oafs who thinks dollar-bills are brain cells. A cartoon and cautionary tale rolled into one unfortunate haircut.

Still he persists. If it sounds like this has gotten personal, in a way it is. Nineteen years ago my very pregnant wife was waiting at ABC Carpet & Home in New York to get on an elevator with another woman when Trump walked, with Marla Maples, to the head of the queue and, ignoring everyone else, stepped on the elevator—ahead of a pregnant woman—and would not allow anyone else on the elevator. He held his hand out like a traffic cop and ordered everyone to not get on the lift.

Really, somebody please slap the hell out of this squinty bitch. Take him out back and kick the shit out of him.

Or better yet—take his name off of our skyline. Send a busload of building inspectors over there and kick a board up his ass. C’mon Rahm, show the creep who is in charge. In fact, tell the overstuffed douchebag, “You’re Fired!”

Tell Trump we got two words for him and they ain’t “Let’s Dance.”

For once I agree with Mayor Emanuel, who was quoted as saying this “is an awful idea.” I almost never agree with the mayor, but I agree with him wholeheartedly about this. This does and should offend Chicagoans. We don’t need the Trump Tramp Stamp adorning OUR architecture. Our city is a living museum of the greatest architecture of the twentieth century.

We are not Atlantic City, a cheap-jack version of Vegas that never learned how to smile. We are not New York with its trinket architecture that obscures the truly lovely and towering buildings and structures.

We are Chicago and we were built by better people than him.

Since the “TRUMP” lettering has been completed, I’ve looked around at other buildings. Nuveen investments has “NUVEEN” on their building. Then there’s also the CHICAGO SUN-TIMES and REALTOR BUILDING lettering. The color of the “TRUMP” lettering actually looks very nice with the building. It really was blown out of proportion on the news. Whoever complained/advised the mayor to speak out on the subject should be fired (LOL).