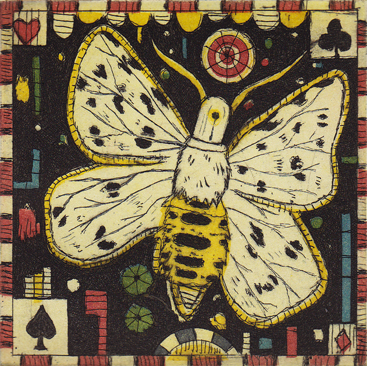 Anthony Potenzo believes a good joint must have rules. That there are unwritten rules which most sentient, sane, bar regulars understand without explanation—the barroom social contract: “Y’know, stuff you don’t have to explain to anyone except the drool-cases and mutants,” he says. “You know what I’m sayin’? Stuff that people who walk upright already understand.”

And then there are the rules you have to write down and spell out. You notice that the people who have to read the posted rules? Their lips are moving while they read them. Hell, their lips move when they read the comics or a grocery list.

There are rules for the patio at Three Aces:

1) No backwards baseball hats. This is to keep the joint  from becoming Wrigleyville, where mob after mob of “Dude-Bros” arrive like a backwards-hat pack of mentally deficient lemmings looking for Jello shots and wings. (The term “Dude-Bro” is used to describe two idiots who run into each other at Murphy’s Bleachers and upon realizing they haven’t seen each other for forty-five minutes shout “Dude!” then “Bro!” and then commence the man-hug.)

Not at Three Aces, Chad or Trent or Biff or whatever the fuck your name is. If you need Bud Light and glow-y neck-wear then high-five your ass down Taylor Street and try not to get slapped. You will not be sitting on the patio at Three Aces. The only Chooch allowed on that patio is my dog and that is only because Chooch is his name, and even he doesn’t wear his hat sniper-style.

2)  There are no “all-you-can-drink” wrist bands or drink specials. All you have to do to ring the douche-bag bell is start giving kids buckets full of shitty bottled beer and shots and then tell them they can have as much of this shit as they want or, in other words: a one-way ticket to the puke-a-thon.

A joint down the street from Three Aces does this and the busiest guy in the place is the guy with the mop. Every night about midnight, Anthony and I will take a smoke break out front on the G-Ball Bench and watch the kids attempt to stay ambulatory while walking home from this place. From a distance it looks as if they are walking on bowling balls. We give them extra points for stringing noun and verb together while doing so. One guy dropped his change and when he bent over to pick it up, his face was on the sidewalk. He didn’t fall, he just kept bending. Anthony observed: “He’s standing on his nose. This would not be possible if he were sober. We should call Ripley’s Believe It or Not.”

Every once in a while one of the walking dead will peek into the patio and notice the good music, the civilized vibe, the lack of big-screen TVs with sports bullshit on and deduce that Aces is not like the frat-boy sack of assholes he just walked out of, and he and his backwards Red Wings hat and his pukey cargo shorts will attempt to enter.

It is here that he meets Anthony. Anthony goes easy on him.”Turn your hat around, you look like a goof. And come back tomorrow—you’ve had too much to drink, pal. Let me put you in a cab.” And he does it. “I don’t want the kid driving,” he says. “There is maybe some hope for that guy. He at least recognized civilization. The rest of the goofs that puke their way home? It makes one despair of the species.”

Despite the idiotic curfew, the patio is lovely during the summer, a civilized place to have a conversation and a gathering of friends. But because of Cubs fans, the Wrigleyville rules apply citywide, meaning outdoor dining and drinking has to move indoors at 11pm, because Cubs fans are loud and feel the need to piss on lawns, doors, cars and, in my case, a dog.

I used to live four blocks from Wrigley Field and had a perfectly sweet chocolate lab named Boscoe who used to lay in the front yard next to the fence. At night it was hard to see him there, minding his own business, unless of course you were a fucktard Cubs fan pissing on him. Boscoe sprung to life barking very loudly, which caused the Cubs fan to piss all over himself and his friends. I never laughed so hard in my life. It was like watching the world’s smallest fire hose loosen from its moorings and become an out-of-control piss-cannon. That will teach you to piss on my dog. From that moment on Boscoe barked at the bastards non-stop and they never pissed in my yard again. A happy resolution for me, but to every outdoor patio in the city, Cubs fans fucked it all up for everyone.

Still Three Aces is a bastion of peace and rock ‘n’ roll  in an otherwise douchey landscape. The patio  is one of the things I will truly miss come fall when the temperature drops. Once in a while there is a pig roast or a gathering of creative bullshitters telling jokes and reminding each other of why they gather in joints like this. Mostly they come to hang around and listen to Anthony and Lyle tell stories and pour shots of foul stuff like Malort and Old Crow.

Anthony explains, “Good Malort tastes like a mix of  turpentine, Pine-Sol, grapefruit juice and piss—and that is the good stuff.” Why would you drink it? “Hey, what the hell. Once in a while, you got to fall on the grenade, my man. You gotta set an example. You know what I’m sayin?”

The crazy part is that I do. It’s eight o’clock at night, and it happens to be Jeff Beck’s seventieth birthday and Anthony has idolized Jeff Beck since childhood. Over the speaker comes Beck’s unmistakable opening for “People Get Ready” and there is a pleasant wafting of reefer smoke from a car window. My friends are pleasantly buzzed, I’m sober as a judge but I can finally relax for the day, and the whole hurting world is on the other side of the fence.

Anthony walks by with a cold Pabst in one hand and a bottle of Old Crow in the other, he smiles and says “My man.”