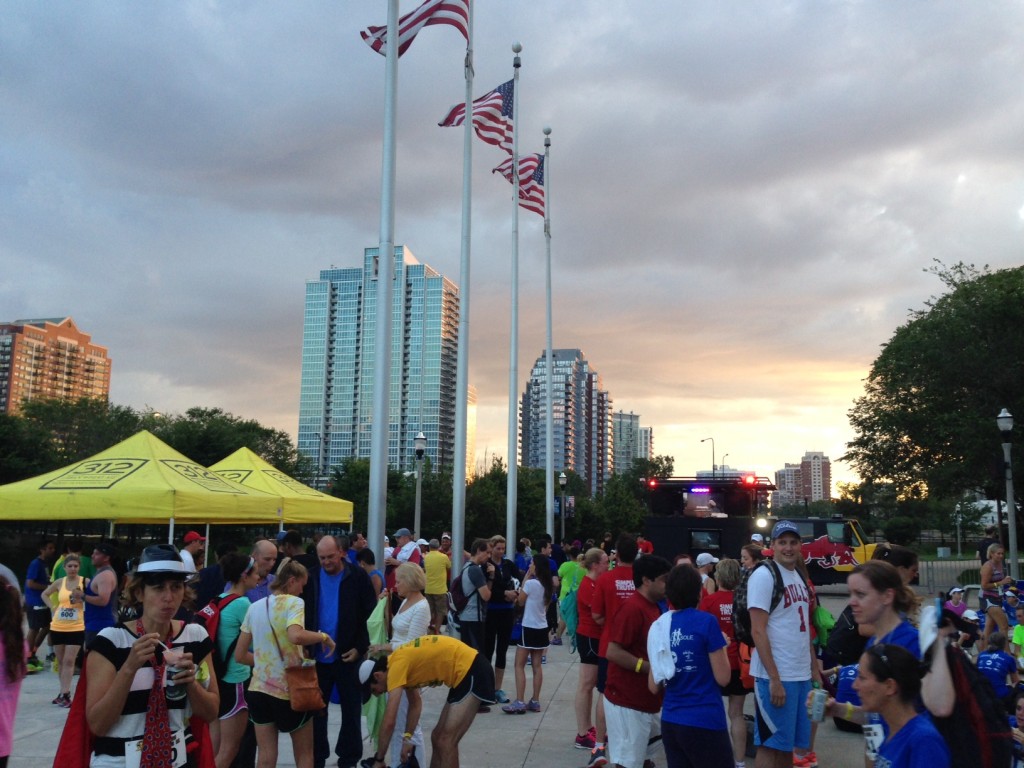 Breakdown:  When a race initially launches, it’s sometimes up in the air as to whether it will survive or not. But with a title that name-checks both burgers AND beer, there was never really a question of whether this 5K (started in 2012) would succeed. It also didn’t hurt that it was started as a logical extension (and expansion) of Universal Sole’s popular monthly fun runs of the same name. So it’s perhaps not surprising that the Burgers & Beer 5K has grown fast enough to migrate slowly south—from Montrose Harbor to Lakeshore East to Soldier Field—in only three years.

Last night’s third annual race, starting and finishing on Waldron Drive just southeast of Soldier Field, followed a new out-and-back course along the Lakefront Trail while the pre- and post-race parties took place amidst a flurry of vendor booths on the sidewalk around the stadium. Goose Island still provides the beer but this year the burgers were switched from Fizz Bar to Billy Goat Tavern (perhaps a rechristening to Borgers & Beer is now called for?).

Race organizers haven’t quite figured out how to speed up the burger assembly line (it can be slow business adding pickles, onions, ketchup and mustard to a post-race burger) and depending on your finishing time there was a sizable wait for a burger, but the beer line was short and sweet, with IDs being checked before the race to limit the amount of post-race time runners spent without beer in their belly.

Price: $40 pre-race, $50 race day
Course: An open, out-and-back course along the lakefront with some fairly intense headwind on the northbound second half, but plenty of volunteers and support stations to keep runners hydrated and on target.
Organization (gear check, etc.): Basecamp and the start/finish line were a bit of a hike from each other, but both were cleanly organized and easy to access.
Goodie Bag (includes shirt): A blue racing shirt with the familiar B&B grinning runner logo, along with the titular burger and beer.
Weather: Temperatures in the low seventies were a welcome surprise for a mid-July run, but the strong wind slowed down the “back” part of the out-and-back course. (Zach Freeman)