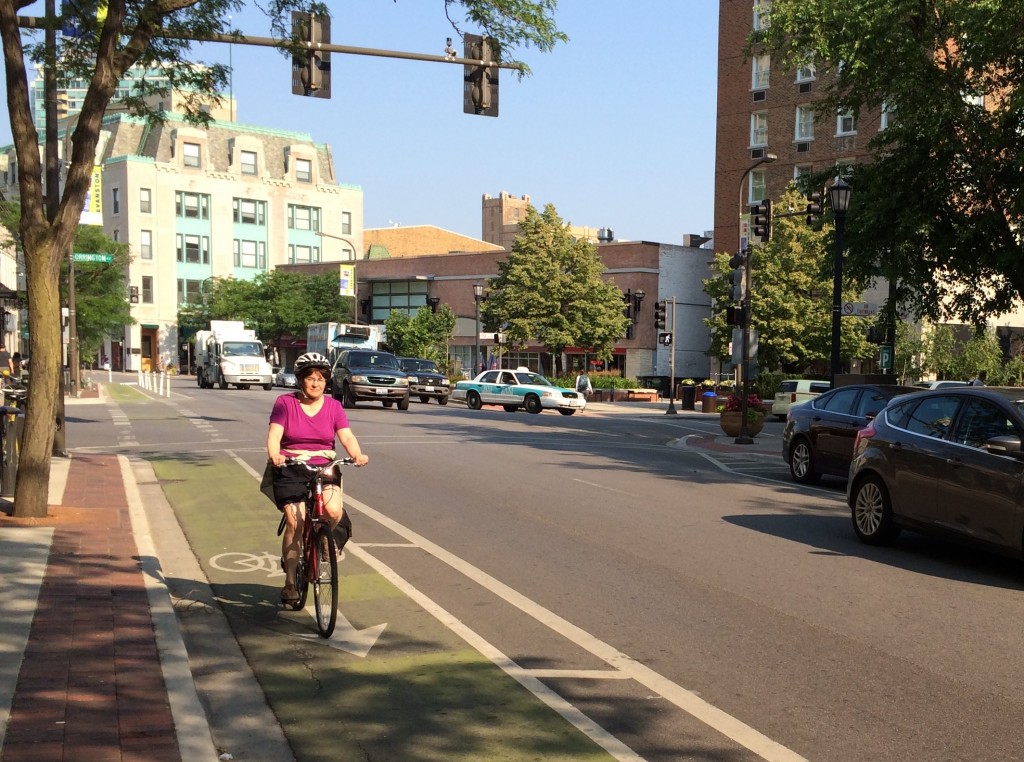 The 600 block of Church Street in Evanston, where the crash took place/Photo: Justin Haugens

From what I’ve read, it sounds like Gigi Galich, a children’s librarian who died after an Evanston bike crash, was a wonderful lady.

Shortly before 9am on the morning of June 30, Galich was bicycling to work eastbound on Church Street, a roadway where the city of Evanston installed protected bike lanes two years ago. As she arrived at the main branch of the Evanston Public Library, at the northeast corner of Church and Orrington Avenue, she began switching lanes midblock, according to a witness. It’s possible she was crossing the street to park at a bank of bike racks by the library’s main entrance.

As Galich, a fifty-five-year-old Evanston resident, was shifting lanes, a twenty-seven-year-old Chicago man, riding eastbound on a motorcycle, struck her from behind. Although the librarian was wearing a bike helmet, she suffered a severe head injury, according to Commander Jay Parrott from the Evanston Police Department. She died two days later.

Shortly after Galich’s death, the library issued a statement noting that she had originally begun working for the library as a high-school student almost forty years ago. “Gigi was energetic, dedicated and passionate,” said the statement. “Her work will live on through the many, many children who learned to love reading under her care and who will remember her presence and assistance as they came to the library for books, stories, crafts and fun.”

A week later, the Evanston Review ran a tribute to Galich with remembrances from family, friends and colleagues. Fellow librarian Brian Wilson recalled working with her on an early literacy program for babies. “She radiated a joy for these children who would match her captivating smiles with smiles of their own,” he said. “She understood them, loved them and was looking out for them, possessing the belief that all children could become lifelong readers.”

The motorcyclist in the fatal crash was not injured and has not been issued any citations, according to Parrott. When I first read about the case, I suspected that the motorcyclist had been speeding. The default speed limit in Evanston is twenty-five miles-per-hour, a speed at which studies show people struck by motor vehicles usually survive.

However, when I spoke to Parrott two weeks ago, he said the police had determined that “there was no excessive speed on the part of the motorcyclist.” That finding was based on witness statements and a crash scene investigation by a traffic reconstructionist looking for skid marks.

“There was nothing to indicate any wrongdoing on the part of the motorcyclist,” Parrott said. “Apparently, the bicyclist had made a tragic mistake.” He added that, while Galich was an experienced bike rider, it’s possible that the motorcycle was in her blind spot, or that she was distracted, when she began changing lanes.

I can relate to the experience of briefly losing concentration while cycling and accidentally making a risky move. Still, if the motorcyclist was really going the speed limit and had been attentive, he probably should have been able to brake in time to avoid the crash. It seems that, if there hadn’t been two mistakes made here, Galich would still be alive. 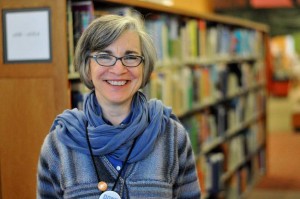 When I read about the case, it also occurred to me that the Church Street protected bike lane might have been a factor in the crash. Church features the suburbs’ first Chicago-style protected lane, where the lane is located next to the curb and cyclists are protected from traffic by flexible plastic posts and/or parked cars to their left.

On parking-protected bike lanes, parking spaces are eliminated near intersections to make it easier for cyclists and turning motorists to see each other. However, sightlines can still be an issue. I’ve heard of a couple of cases of “right hook” and “left hook” crashes on Chicago PBLs, where bike riders were struck at intersections by drivers who didn’t see them in time. Again, Galich was switching lanes midblock, not at an intersection, but it’s possible that parked vehicles might have blocked her view of the motorcyclist and vice-versa.

However, I have since learned that the block of Church in front of the library is not parking-protected. As shown in the above photo, it’s a curbside buffered lane without parking or posts. Therefore, parked cars were not to blame for obscuring Galich’s view.

That’s an important point, because Evanston is currently in the process of expanding its bike network, with new PBLs planned for sections of Dodge Avenue, Davis Street, Chicago Avenue and Sheridan Road. It would be very unfortunate if this tragic case were used as an argument to derail these projects.

Protected lanes are great for encouraging less confident bike riders to try on-street cycling. Evanston officials have said they’ve seen a significant increase in bike traffic on Church since the lane was installed. After the city of Chicago installed PBLs on Kinzie Street in 2011, morning ridership increased by fifty-five percent, and after Dearborn Street got a two-way protected lane in 2012, the number of cyclists rose by a whopping 171 percent.

Furthermore, data from New York City, which has been installing PBLs since 2007, shows that protected lanes have a very positive overall effect on safety for cyclists, as well as pedestrians and drivers. For example, after protected lanes were installed on Manhattan’s 9th Avenue, there was a fifty-six percent drop in injuries to all road users, according to a study by the local transportation department.

It turns out that Galich had something to say about PBLs and safety. Last winter, on the public input webpage for the city of Evanston’s new bike plan, cyclist Lori Scott commented about the sightline issue. “Yikes!” she wrote. “On the Church Street protected lane, right-turning cars are often not aware of bikers going straight.”

“One way to remedy this would be to put in bicycle-only traffic lights such as those used in Europe,” Galich responded. “Cycle lights go green before auto lights, and cyclists are less likely to be hit by turning traffic.” That’s basically the situation on Dearborn, and it would be great if dedicated bike signals were added to more Chicago and Evanston protected lanes.

It appears that, in addition to being a talented and beloved librarian, Galich was well informed about bike infrastructure. Tragically, she died from a type of crash that perhaps couldn’t have been prevented by any kind of bike lane. That’s a huge loss for the children of Evanston.