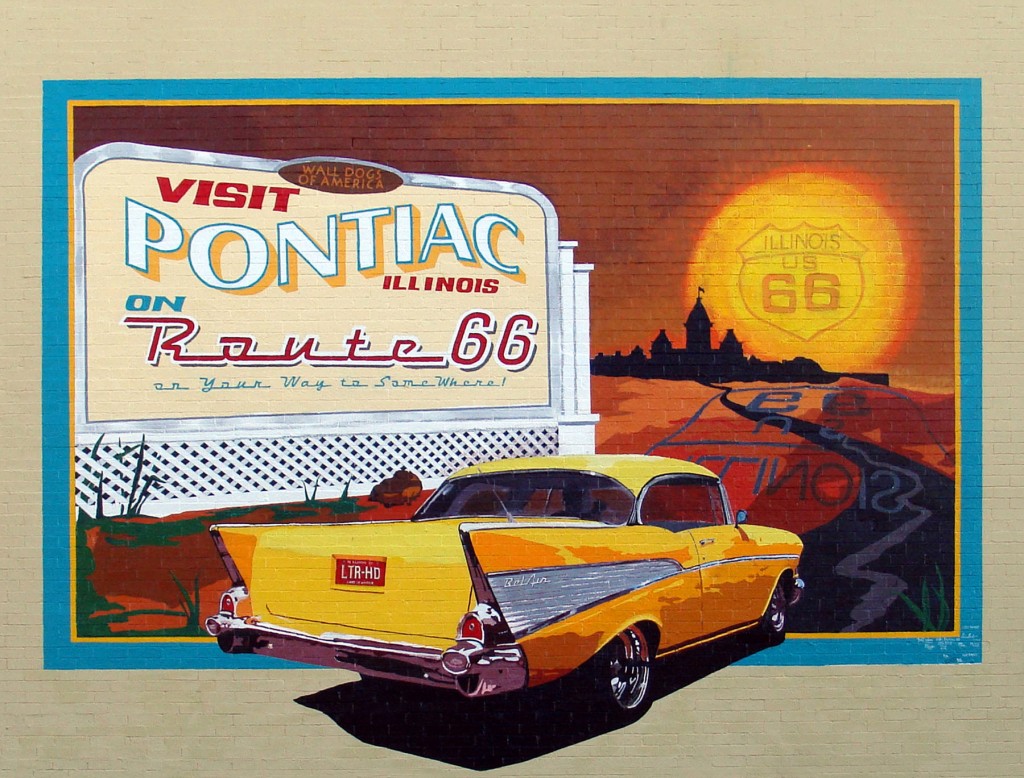 Walk through downtown Pontiac and you are greeted with the black-and-white of a terrier, tilting its head to hear the RCA Victor megaphone, the classic red of the Coca-Cola logo, a bright yellow ’57 Chevy pointed down Route 66, and a grey and blue shark bursting out of the sidewalk, all painted bigger than life on the sides of buildings.

Six years ago, the town may have suffered the same shuttered fate as many small industrial and farm towns. But instead of pinning all their economic hopes on the orange uniforms of the nearby Pontiac Correctional Center, or the rust on many factories, Pontiac was saved by a rainbow of colors from artists’ brushes. 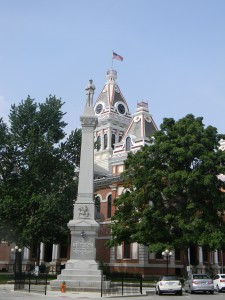 For the town, which was incorporated in 1837 as the Livingston County seat, the crisis began in January of 2008. Rain and a freak winter thaw sent up to nineteen feet of Vermilion River water into the streets, devastating houses, buildings and businesses. In May of that same year, Governor Rod Blagojevich took the first steps toward closing the Pontiac Correctional Center, the town’s major employer. In September, the entire nation experienced the worst economic downturn since the Great Depression.

Businesses faltered. People began putting their homes on the market. It seemed like three strikes for this sleepy hamlet on old Route 66 approximately two hours south of Chicago. “In 2008, the flood, proposed closing of the prison, and the nation’s economic downturn was a perfect storm that left the city of Pontiac struggling,” Liz Vincent, curator of the International Walldog Mural and Sign Art Museum says. But Pontiac had a plan.

“It seems that while every town put their efforts into new factories to create jobs,” Vincent continues, “we focused our efforts on art, culture and tourism.”

Six years later, the town is home to a Route 66 Museum, the International Walldog Mural and Sign Art Museum, Museum of the Gilding Arts , and the Pontiac-Oakland Automobile Museum, all free to visitors. It also features galleries, shops and restaurants, the Vermillion Players, fifteen “art cars” stationed throughout the town, and twenty-one building-sized murals which have transformed the city into an outdoor gallery. 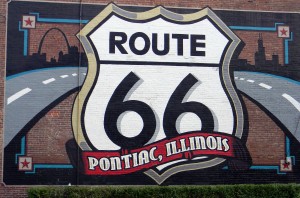 Even before the downturn, Pontiac had sown the seeds for its revival. In 1999, the town’s tourism director, Betty Estes, cooked meals, passed out flyers and literally rolled out a red carpet in her efforts to secure funding for the opening of the town’s Route 66 Museum. Artist Bob Waldmire, known for his Route 66 artwork, made his summer home in Pontiac. Today, his VW Microbus sits inside the museum and the legendary “hippie school bus” he used to travel the mother road is now an exhibit in itself in back of the Route 66 Museum.

But the largest lynchpin in Pontiac’s plan was the arrival of the “Walldogs” in June of 2009. The Walldogs are a group of muralists. Every year, this guild picks a town to descend upon. From June 25-28, 2009, they resided in Pontiac. “They did eighteen murals in four days,” Vincent says. “The artists worked around the clock but it was also a project that included the whole town. It started with people in the town working on the restoration of the walls and tuck-pointing beforehand, and while they were there we had marching bands going, people bringing food and water, and many other homes and businesses volunteering to put up the artists.” 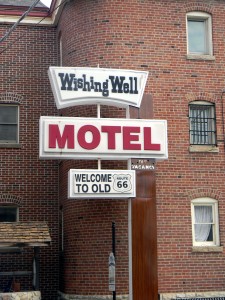 Like Dorothy’s house landing in Oz, the town transformed in an instant.

But its leaders did not stop there. Empty storefronts, often signaled by windows covered with taped-on newspapers, are another signal of economic blight. But once again Pontiac had a plan involving art. “To try and keep storefronts open and working we made an agreement with the local artists called the placeholder,” Vincent says. “They would have to volunteer for certain hours a month working in the shop, keeping the doors open. A certain amount of what they earn goes to the city, but if at the end of the month they cannot make the rent, the city will make up the difference. If at any time the tenant wants to put in a different tenant than they would get a different storefront.”

Another economic boon for the city, vis-a-vis art, has come from artist Dongbai Tang and his studios. A native of Beijing, he ran the International Painting School in Beijing, and painted murals for the 2008 Summer Olympics. Besides murals, he specializes in airbrush art and using a specialized paint that glows in ultraviolet black light. Dresses and other clothing that feature his designs look plain during the day. But his butterflies, flowers and faux pearls glow in three dimensions under the glow of the nightclub beacon. Entranced by the Walldog Mural website, he decided to stop by Pontiac after he interviewed at Chicago’s School of the Art Institute.

“He visited our city and loved it,” Vincent says. “He loved the serenity and he said that the slower pace of the town inspired him. I suppose after the crowds of Beijing and even Chicago, it would make sense.” 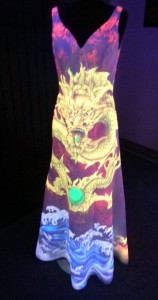 In 2010, he had two art shows at the Walldog museum. A short time later, Tang relocated his studios from Beijing to Pontiac. He also opened an art school that teaches airbrushing, wall murals, body painting, temporary tattoos, fantasy make-up and special effects. Still renowned in Beijing, a recent change in tourist visa regulations has led the way to Pontiac receiving caravans of students and visitors from China to view Tang’s mastery.

“Last September, a crew from a Chinese reality travel show doing a piece on Route 66 came to Pontiac and found out about Dongbai,” Vincent says. “They put a clip about him on [Youku] the Chinese YouTube, and so far it has received three million views.”

Last but not least, the town also features fifteen “art cars.” Patterned after Chicago’s famous cows, these colorful papier-mâché “go-karts” are stationed throughout downtown, serving as mini-murals and conversation pieces. Pontiac also features a new theater group, The Vermillion Players, which is co-directed by Vincent, and the frequent Route 66 antique-car parades feature rock and blues bands playing the music of the mother road. Finally, the Pontiac-Oakland Auto Museum features the familiar GM brand Pontiac cars and memorabilia, including a large library of books, repair manuals and ephemera.

Alas, the entire town is not supported by art alone. In 2009 Governor Quinn reversed the decision to close the Pontiac prison, so it still supplies many jobs to the city. Pontiac remains the county seat of Livingston County and an agricultural center featuring railroad stops and grain elevators used by local farmers. But the city is mainly symbolized by art, and its identity may be best summed up by a quote from choreographer Twyla Tharp hanging from a placard in a local gallery. It reads: “Art is the only way to run away without leaving home.” 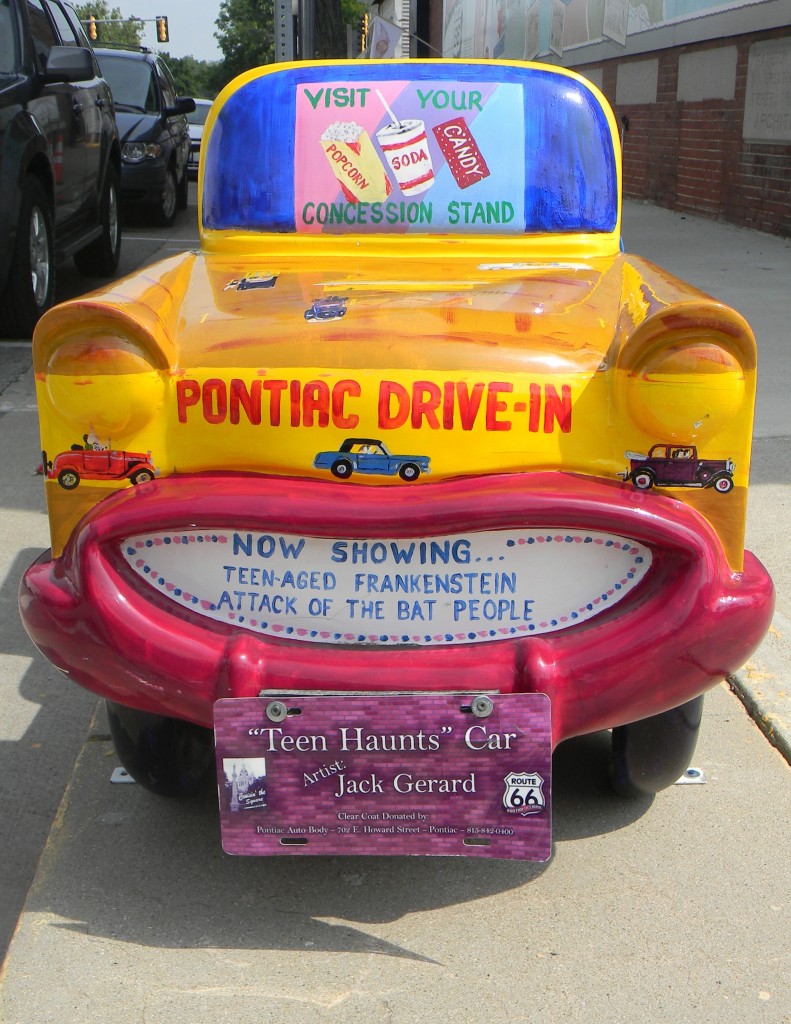