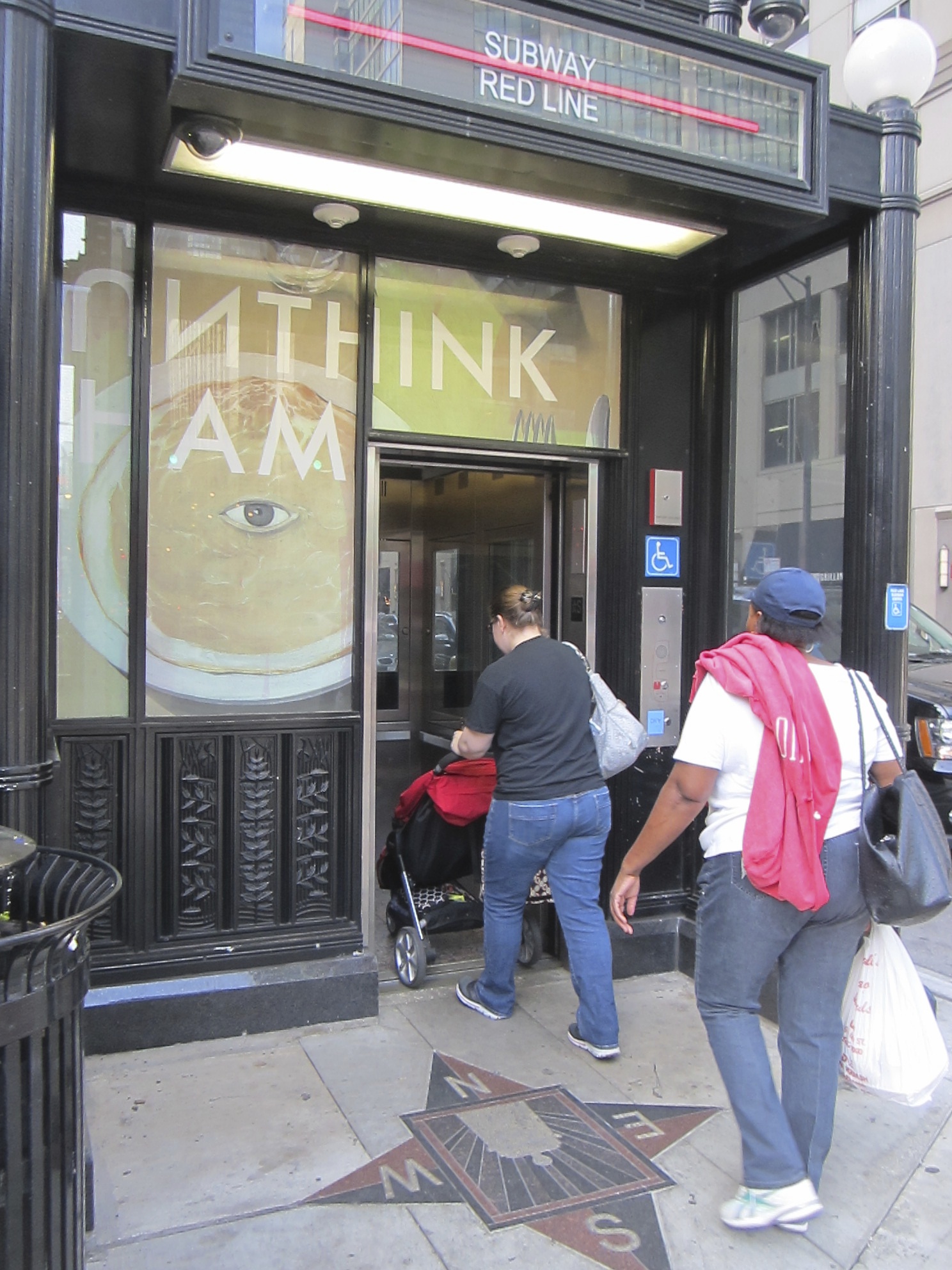 The elevator at the Red Line’s Grand stop/Photo: John Greenfield

I don’t mean to sound pissy, but the Chicago Transit Authority is having difficulty keeping its elevators urine-free. Some say it’s the agency’s Number One challenge.

Like most Chicagoans who get around by rapid transit, I’ve noticed that people often use the lifts as restrooms. However, the issue really hit home when my seventy-eight-year-old father visited last month. Due to knee troubles, it’s tough for him to walk more than a couple blocks at a time, but he gets around great on a bicycle, and enjoys seeing the Windy City on two wheels.

My dad and I did much of our sightseeing by cycling to my local El station, riding the train downtown with our bikes, and then pedaling to destinations like the Shedd Aquarium and an architectural boat tour. That made for nearly door-to-door trips, requiring less walking than if we’d taken a car there.

The main downside of this approach was that we had to use CTA station elevators on numerous occasions, and they often contained pungent puddles that dampened our tires. It was a minor annoyance for us, but for seniors and people with disabilities who have to use these lifts on a regular basis, the daily indignity of wet floors must be a major aggravation.

Last week, I staked out an elevator that serves the Red Line’s Grand Avenue stop and buttonholed a few riders to get their perspective on this yellow peril. Natalie Bell, a project director for a consulting firm, commutes from 79th Street in the Chatham neighborhood to her office in River North via the El. Since she has rheumatoid arthritis, she uses the lift instead of the stairs.

Bell estimates that about half the time she enters a CTA elevator, someone has recently urinated in it. “It’s major to me,” she said. “You don’t want to step in it on your way to work, and especially when you’re on your way home, because you don’t want to bring it in the house.”

Davey Williams, a retiree from East Garfield Park who walks with a cane, told me that flooded elevators are also a common hazard on the Green Line. “It’s real bad at Pulaski and Lake, and Kedzie and Lake,” he said. “Oh my god. That stuff is so strong, it burns your eyes.” He thinks the CTA could address the problem by adding more security guards at stations, and by providing washrooms for customers, instead of just for employees.

World-class subway systems in cities like London and Tokyo do provide reasonably clean restrooms free of charge to riders at most or all stations. New York and Washington, D.C. also provide bathrooms at some transit stations. So why doesn’t Chicago?

The CTA used to have washrooms for customers, but shut them down in the 1970s, according to spokeswoman Ibis Antongiorgi. “CTA’s decision to close the public restrooms more than forty years ago was due to a lack of funds to maintain the facilities, and also a security concern,” she wrote via email. “Today, costs associated with maintaining such facilities multiple times a day and ensuring a safe environment continue to be beyond the agency’s fiscal means.”

The transit system currently has about 250 bathrooms for CTA workers, but civilians can only use these facilities when the situation falls under the guidelines of the Illinois’ Restroom Access Act, Antongiorgi said. In general, the person must have a medical condition requiring immediate access to a toilet, and there must be no public restroom within a half block of the station.

“Cleanliness throughout our bus and rail system is a priority we take very seriously,” Antongiorgi added. Elevators are cleaned seven days a week, several times a day between 5am and 9:30pm, including mopping the floors and wiping down the walls with disinfectant. Presumably, much of the illegal peeing takes place after 9:30pm, during the wee hours. However, any time a customer complains about a defiled lift, the CTA dispatches a janitor to clean up the mess. The elevator shafts are also power-washed about twice a month.

Antongiorgi noted that urinating in CTA elevators is illegal under an ordinance that outlines the rules of conduct on the system, since this behavior is classified as indecent exposure. Culprits are subject to a fine of not less than $100, plus court supervision, restitution for damaged property, and/or community service. Chicago police officers are responsible for enforcing the law when they encounter someone heeding nature’s call on CTA property, but fear of arrest doesn’t seem to be an effective deterrent—yet.

The good news is, the transit agency is now including 360-degree security cameras in the construction specs for all new elevators. So far, there are six stations whose lifts are equipped with the cams: the Green Line’s Morgan stop, and the Red Line’s 87th, 63rd, 55th, and Clark/Division stations.

“We have yet to catch someone urinating or vandalizing an elevator at one of these six stations, Antongiorgi conceded. However, as the cameras become commonplace and would-be elevator urinators realize Big Brother is watching, surely they’ll opt for an alley instead. It seems like the security cams are a golden opportunity for solving the problem.