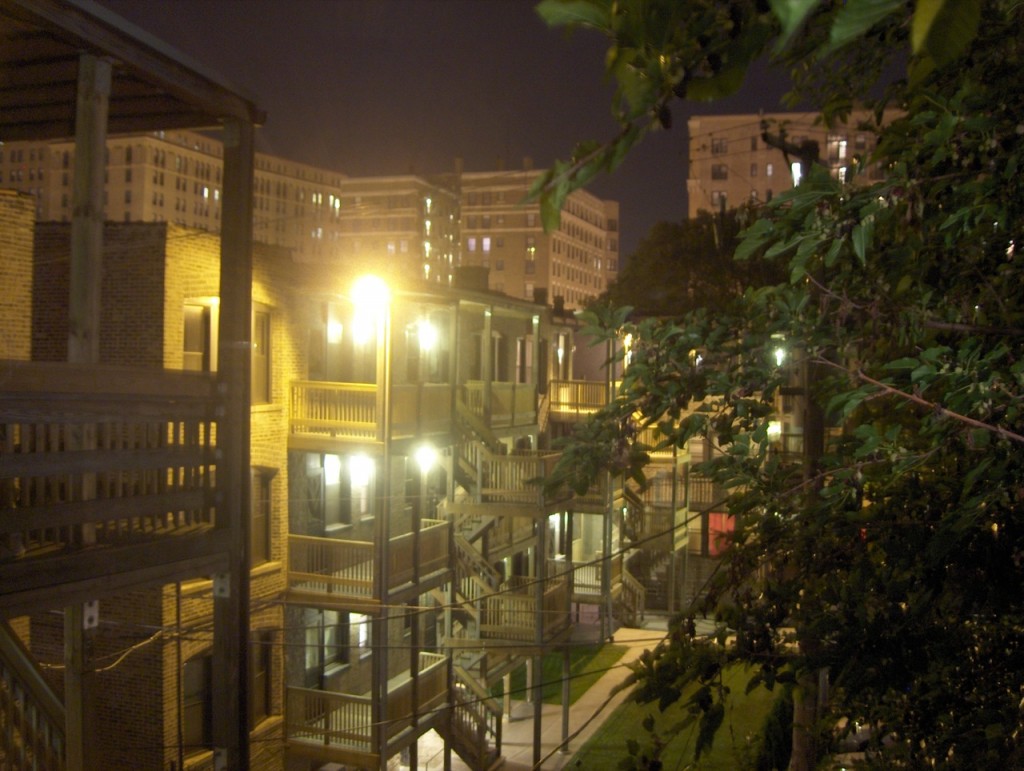 By the time we manage the hour-and-a-half El-train-to-bus junket from Lincoln Square to Hyde Park, we’re already gripped with that particular combination of fatigue and active nerves usually reserved for those nights we’ve spent snorting lines of crushed Adderall washed down with too much booze. But tonight. Well. It’s New Year’s Eve, after all, and there’s plain cause for our anxious jubilation.

Our shadows stretch up the walk ahead, slowly splitting and shrinking beside, then behind us as we make our way up the 5500 block of Hyde Park Boulevard to Moomers. Not the ice cream from Michigan, but the Hyde Park institution, named after a founding tenant’s beloved feline pet, a name passed down, same as the hideout that preserves its legacy, tenant to tenant, generation to generation.

I’m with Cinnamoan Smidge, who I’ve been dating-slash-sleeping-with on and off again between bouts of mutual, relationship-ending, suicidal indulgences for roughly the last nine months. We’re here tonight because a friend of Cinnamoan’s rang up about the party, with whom she keeps texting as we stroll, finally locating the correct house number. And there it is, marked right on the buzzer, “Moomers,” it says, plain as day. We buzz, I count half a dozen heart beats, and we’re admitted. Inside, we’re greeted by Tyrone (not his real name), a young, wiry-framed guy in suit jacket and fedora who administers the place. Hugs and handshakes, and we slip out of our jackets and scarves, depositing them on the already-crowded coat rack just inside the door, opposite the large, dormant Tesla coil.

Then we get the tour of the resident-built, wooden, black-painted dance floor in the far corner of the living room, gigantic mirrored disco ball dangling, still and unmoving above it à la Damocles, out the white aluminum door back into the freezing air beyond, then back into and through the radiated heat of the place to the well-lit kitchen where everyone is gathered.

Immediately to our left as we enter the kitchen, I fixate on a frumpy young guy in brown sweatshirt and jeans, barefoot, with hair down to the middle of his back, sprawled out on a futon, curled tightly with a tiny, clean-scrubbed peroxide blonde in a white mini-skirt, her peaches-and-pink legs seemingly twice the length of her torso, like so much length of pulled taffy over his lap and down the length of his calves, the hosieried bulbous round of her toes hovering over the barely visible knobs of his ankle bones.

They watch us walk past, unspeaking, as Cinnamoan finds her friend Henry (also not his real name, but so-called due to his proclivity to drink Old Fashioneds while lounging in the tub reading Henry James) visiting from Harvard.

Henry mixes up a pitcher of martinis and we all retreat to the second of three of the Moomers outdoor patios where we drink and smoke copious amounts of cigarettes, discussing William James, Pynchon, various ratiocinations, emotional and otherwise, a long, seemingly ceaseless inventory of shared intellectual enjoyments as the holiday crowd slowly, inexorably begins to press in around us.

Polarized by a spectrum of social compulsions, we migrate at some point back into the kitchen, and I find a place to sit on the couch diagonal the kitchen table. Cinnamoan throws her arms around my shoulders, shapely, longing, tongue darting out in invitation to a moist, meaty kiss, and I respond, mindless, unfeeling. Eating. She sighs, leans back, full from the meal.

A long, enduring silence breaks out in my head, attenuated by the conversation going on all around, floating in my emotions, until, then, it’s interrupted by a convergence of voices suddenly from the entrance and, looking up, I see a woman with long, brown hair down past the curve of her lower back walk in, watching the ends sway against the soft steatopygous curve of her buttocks, touching then away, then back as she moves across and to sit at the kitchen table, joined by a thin, pale, freckled redhead friend. “That’s Varginia Slim,” Cinnamoan whispers to me conspiratorially. “She runs a feminist sex blog.” I watch her as she talks, unassuming, but aware, casting sidelong glances my direction, uninterested, not missing a beat, animated in conversation. Attractive, simultaneously self-possessed and willing to accept what seems some innate inability to center the rest of the universe around her self. Beautiful.

Cinnamoan disappears, off into the warming bosom of acquaintances and U of C contemporaries, vanished and untraceable. As usual. Right now, it feels like a blessing. I’m registering the influx of people largely by the proximal feeling of nearby body heat as they pass, not looking up, having stumbled across a secondary on Charles Pierce that keeps me engrossed until the room gets too chatty, too filled with people who I don’t know and don’t know me.

Eventually I find myself engrossed in an overstuffed recliner in the front room, hunched back down onto the base of my spine, reflecting on what I’m thinking, maybe what I’m not letting myself manifest as thought, sense of futility and surrender a welcome cocoon of indecision—that familiar feeling of awareness of how much of a burden I am to others invading me as I long after my loss of individuality in the crowd, where Cinnamoan wanders somewhere far away, making the rounds amongst old friends and lovers, some newer than others. It doesn’t occur to me to get up and go look for her, so enraptured am I with this line of thought. As I lay there, the brown-haired blogger girl from earlier saunters into the room, glass in hand, and scans the room as she walks up onto the dance floor. She lingers awhile, still, radiating, staring at the floor beneath her boots, then places her glass on a nearby windowsill and starts, with a small, circular swivel of her hips, to dance alone.

Keeping my head down, I watch under the ridge of my brow as she moves in rhythm with the music, long, pale white arms dangling loose beside her hips, whining electric guitar filling the air. Time and sound seem, for a moment, to fuse, puncturing my shield of introspective self-awareness. Then Cinnamoan is beside me, flensing away the fleshy shield of my escapist hope.

“What are you doing over here all by yourself?” she asks, genuinely curious if not sincerely caring. I doubt she would ever acknowledge a difference. Not that my current mood is helping any. We talk awhile, my sense of contented distance from the moment fading, and eventually I break away under cover of need for the restroom, wandering across the place to the kitchen again, this time back into the area behind the main room, outside the flow of the now-sizable crowd of revelers gathered there.

It’s a respite, if not quiet, at least separate from everywhere else in the place, where I can collect myself, now gripped with so many conflicting feelings grown out of the soil of so many powerfully self-hating compulsions, that the time to breathe helps. Time ticks, ticks again, slows in timbre.

Staring at the floor, I see a woman’s hand slowly move into my field of vision, holding a plastic champagne glass. Thin fingers, with immaculately manicured blue nails, holding it out, unmoving glass of bubbling beige waiting for me to acknowledge it, and finally, looking up, I see this smiling visitation with no makeup, an honest face, short, black, shoulder-bobbed hair, smiling at me. Young, trusting. “Do you have one?” she asks. “No, I answer, taking the glass. “Thank you.” And she gives the ever-so-subtlest of nods and steps bodily, and with an air of fullest satisfaction, back into the anonymity of the crowd, assembled in this moment as if ascending a ziggurat in the kitchen, glasses raised, concentric tier upon concentric tier, the top of Tyrone’s fedora just poking up over the raised hands as he clambers atop the dinner table against the wall, shouting “Three! Two! One! Happy New Year!”

I nod, and sip the champagne, transformed by some change taking place, an onslaught of violence pushing back against the tide of sadness in me. I take a breath, and down what’s left. Swallow it all. Drop the plastic glass, and I crush it to pieces with my heel. Suddenly feeling less lonely than I’ve felt for as long as I can remember.