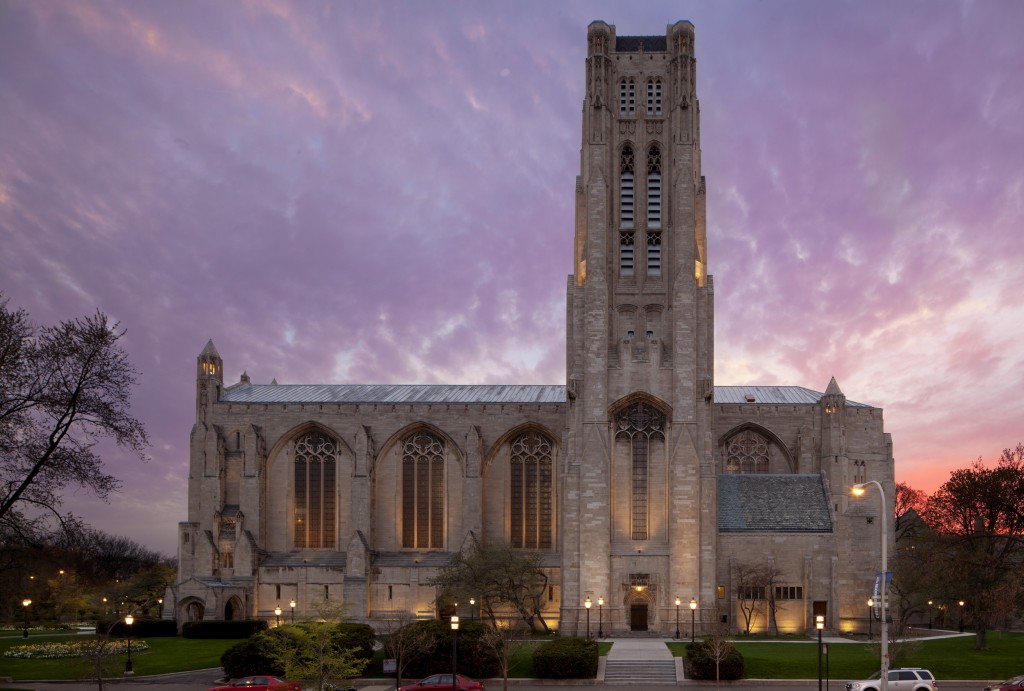 While earning my Master’s in Computer Science at U of C, I worked in the Harper Center as a member of the Chicago Booth staff. There I found myself in an architecturally impressive, award-winning building adjacent to two of Hyde Park’s most notable landmarks: the towering structure of the Rockefeller Chapel to the west and Frank Lloyd Wright’s historic Robie House to the north. However, in almost three years of spending around fifty hours a week for work or class in Hyde Park, I never once ventured into either. They were only the backdrop of my day-to-day life. As graduation approached and my time working at Chicago Booth came to a close, I decided to rectify at least part of this situation. For the first time in three years, I trekked across Woodlawn Avenue on a lunch break one afternoon and slipped into Rockefeller Chapel.

The vastness of the space surprised me. Its impossibly high ceiling. Immaculate stone walls. That monster of an organ. But most of all, I was surprised by my utter solitude. For some reason I had imagined it to be a place where I would be confronted by docents or guards or at least some stuffy staff person asking my purpose. Instead, I was enveloped by a deafening silence. I took this silence as an invitation to explore the space, step onto the massive altar and find an open door into the tower stairwell. I climbed the stairs, and feeling like I must be breaking some unwritten law, I thought about my degree, my career and my life in general. Climbing higher and higher, I felt a sort of meditative wonderment at how I had managed to ignore, or at least overlook, something like the Rockefeller Chapel every day for almost three years.

When I reached the upper level, I paused and looked out through a small window, gazed over the buildings and lawns of the university from my private perch. Looking down into the glass ceiling of the Harper Center, I imagined myself at my desk looking up, blind for years to the tower I now stood in. It was then that I realized I had to explore as much of campus and the surrounding area as I could before leaving. The reality is that even if you live in Chicago, you’re not likely to make too many trips to Hyde Park just to walk around. So I took advantage of what I had while I had it.

Among other things, I checked out the Smart Museum, went to a free piano recital at Fulton Hall, ate at the Harold’s Chicken Shack on 53rd (where you pass your money through a bulletproof divider), visited an exhibition at The Renaissance Society and taunted the Oriental Institute’s figurine of Pazuzu, the evil demon that possesses Regan MacNeil in the “The Exorcist.” That last week was a study in varied experiences.

Having been away from Hyde Park for more than four years now, I still regret never touring the Robie House. I can’t recommend the tour since I’ve never taken it, but what I can recommend is taking advantage of everything around you and never letting it appear less than amazing. But most of all, I recommend visiting Pazuzu. He made his film debut several decades ago and, unlike the Robie House, he’s fallen out of the ever-shifting eye of popular culture. Maybe visiting him will possess you to explore more. Or maybe he’ll just possess you. (Zach Freeman, MS ’10)