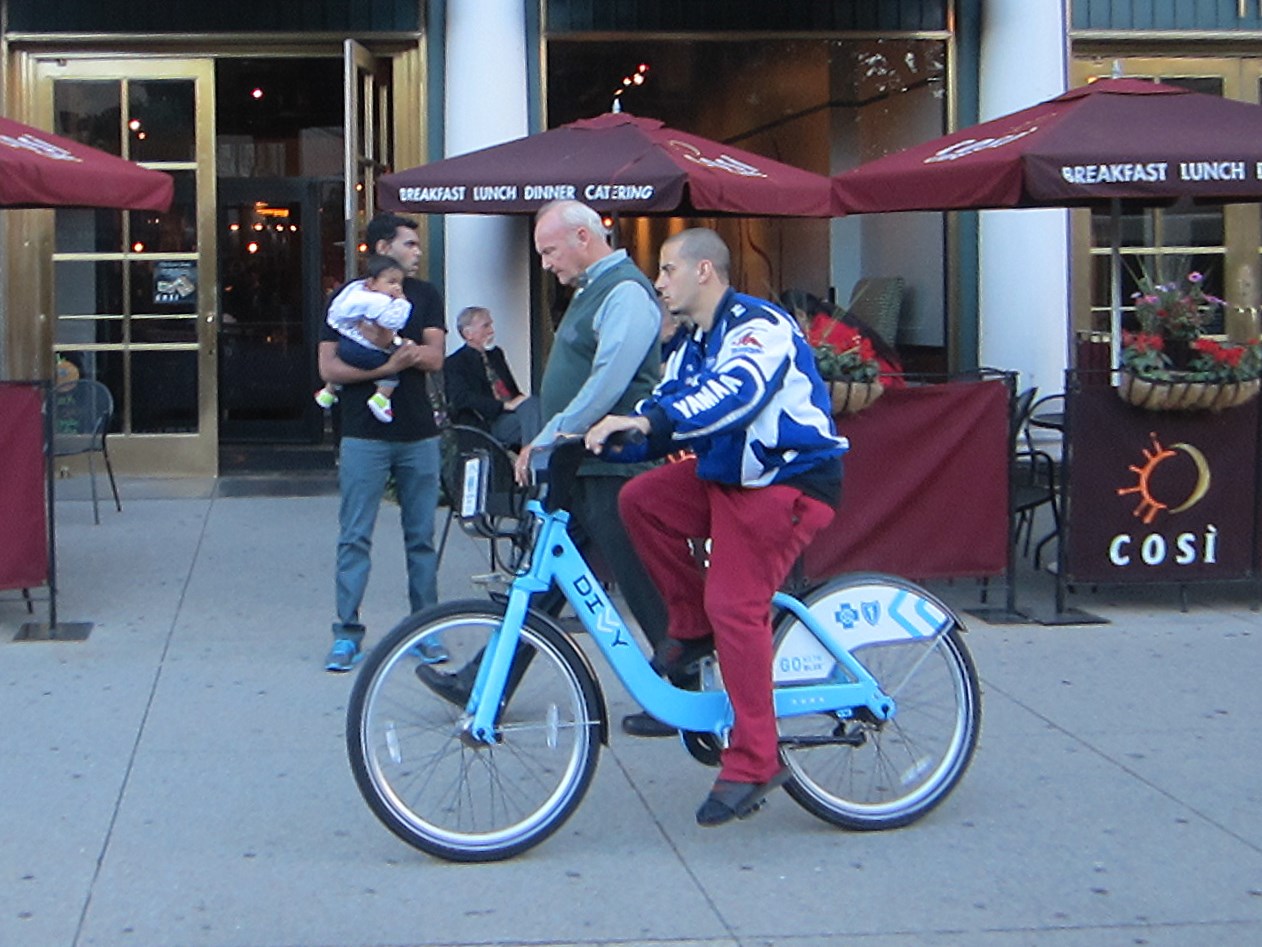 Chicago’s master bike-baiter, Tribune columnist John Kass, was one of the first local pundits to warn the public about the dangers of Divvy. “I can’t stand those Divvy bike people,” he griped in an online video in August 2013, a couple months after the system launched. “Go outside on Michigan Avenue… Reporters going in and out of this building almost get killed. ‘Cause you’ve got some little old lady from Denmark… and she’s on the sidewalk, and she’s almost smashing into the Polish pedi-bike guys.”

However, more than one year and 2.6 million trips later, the bike-share system has a solid safety record. To date, there have been zero reports of Divvy riders being involved in crashes resulting in serious injuries. What’s more, last August Reuters reported that there have been no bike-share-related deaths in the U.S. since modern bike-share debuted in this country seven years ago.

Probably the biggest reason bike-share is so safe is the cycles themselves. They’re heavy vehicles with low gearing, which discourages fast speeds. They have a low center of gravity and fat tires that help take the shock out of potholes. Their fully enclosed brakes work well in wet conditions, and generator lights ensure that riders are easy to spot at night.

Still, ethnic stereotyping aside, there does seem to be a kernel of truth to Kass’ complaint of lawbreaking by Divvy riders. I myself have noticed a number of people pedaling the bikes on the sidewalk or against traffic, usually in the Loop or River North. I could see how this behavior could annoy or freak out pedestrians and drivers.

There was the time I encountered a line of six adults riding Divvies on the sidewalk for several blocks of Jackson Boulevard in the Loop. It turned out they were visiting from São Paulo, Brazil. When I explained that sidewalk riding by adults is illegal in Chicago, their leader replied, “What? It says right here [in text between the handlebars] ‘Walk bikes on sidewalk.'” It turns out that the Portuguese for “to ride a bike” is “andar de bicicleta” or “to walk by bicycle.” No wonder they were confused.

At a recent meeting of the Mayor’s Bicycle Advisory Council, a rep from a local bike-rental company said that she’s heard complaints that Divvy users don’t seem to be as aware of the rules of the road as other cyclists. She asked what’s being done to educate these customers about safety before they’re allowed to hit the streets.

In addition to the admonishment against sidewalk surfing, the text on the bikes’ headsets reminds users to ride with traffic and yield to pedestrians. Safety rules are posted on the docking stations’ map panels, and customers buying twenty-four-hour passes from the kiosks must press a button to confirm they know the rules before being given a code to unlock a bike. Annual members receive packets in the mail containing safety materials, along with their dock key.

At the meeting, transportation commissioner Rebekah Scheinfeld acknowledged that some Divvy users don’t always ride lawfully. “I think we’ve all experienced that,” she said. Since the city will be expanding our 3,000-bike system by another 1,750 cycles this spring, Scheinfeld said it’s an opportunity to make the headset text on the new bikes more conspicuous by printing the warnings in a different color and/or font.

“We’re aware of the perception that Divvy riders are less experienced riders,” general manager Elliot Greenberger told me. “But it’s hard to say whether Divvy riders are indeed breaking the rules more or if they’re just more identifiable.” He added that Divvy recently began granting a month-long membership extension to all members who complete the gold level of the League of Illinois Bicyclists’ Bike Safety Quiz, an online bike safety course.

However, roughly twenty percent of the 2.6 million rides were taken by out-of-towners using day passes, Greenberger said. “Sometimes people coming from another state or country may not be familiar with local bike laws, and that’s generally when there might be an issue,” he said.

I posted a query on TheChainlink.org, a social networking site for local cyclists, asking if members thought lawbreaking was more common among Divvy users. They agreed with Greenberger that the majority of sidewalk and wrong-way bike-share riders seem to be from out of town. “But they’re also quite slow, so it’s not a huge hazard,” wrote one commenter.

That was the case with Junior Bashi, twenty, a visitor from Detroit I spied pedaling a Divvy down the west sidewalk of Michigan Avenue near the Art Institute last week. When I buttonholed Bashi, he said he didn’t know about Chicago’s sidewalk riding ban, and he hadn’t noticed the text on the headset. It was his first visit to the Windy City, and he didn’t know his way around, so he chose to bike on the sidewalk rather than take his chances on the six-lane Boul Mich. Overall, however, he seemed to be having fun on Divvy. “It’s good,” he said. “I like it.”

If Bashi is typical of ill-informed tourists on bike-share, it seems like these folks don’t present much of a threat to pedestrians, other cyclists or themselves. Should Divvy be doing as much as possible to alert these newbies to the rules of the road before they saddle up? Yes. Is there much risk of a bike-share bloodbath anytime soon? No.

Hi John, I always enjoy your writing. I enjoy seeing the Divys around town. Haven’t notice much misuse in my neighborhood.