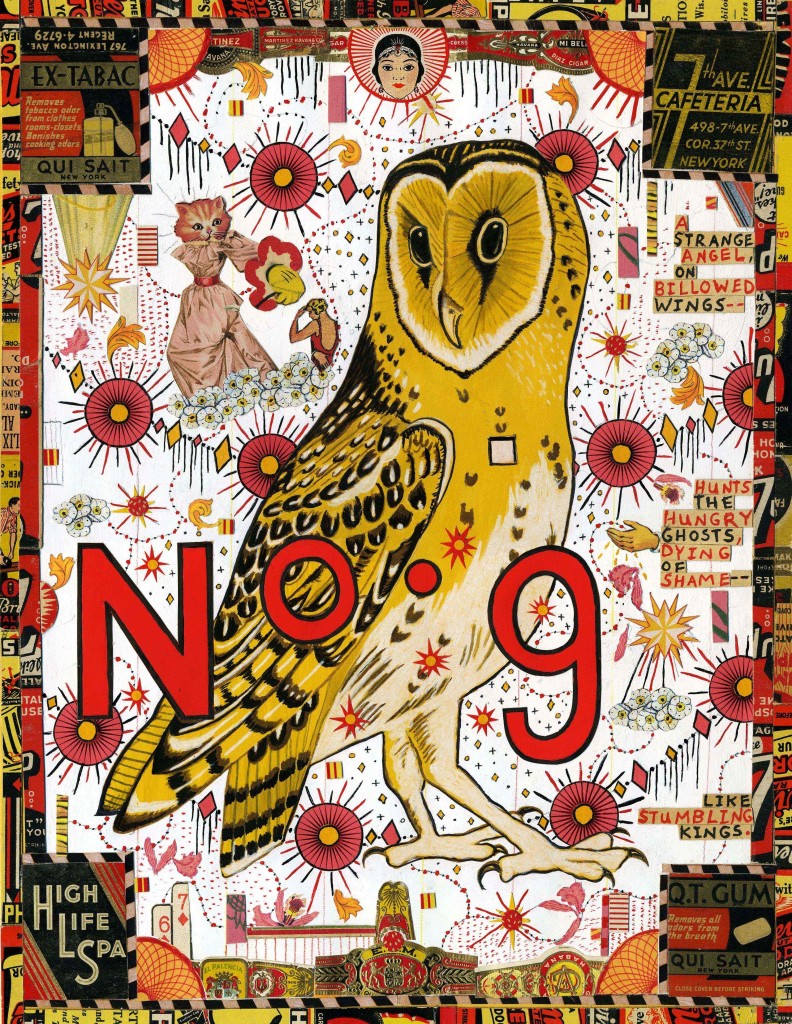 If you drive rural roads, particularly the ones in the Midwest where the landscape is flat, you often see owls in radio towers at dusk or dawn. This is mostly when they hunt. When I was young, I hitchhiked everywhere (across the country a couple of times) and I remember being stuck on a road outside Galesburg, Illinois, which  is the very definition of “East Bumfuck,” trying to thumb a ride. I got picked up by a guy who was shuttling U-Haul-style moving trucks who drove me back to Champaign where I was not attending college. He gave me a job cleaning and servicing moving trucks, which I used to load up with my friends after hours and have rolling parties, with twenty goofballs packed into the truck, a keg and a boom box blasting AC/DC. We would stop at a townie bar in Urbana called Huffy’s, owned by one Earl Huffman, an ill-tempered drunk and bad pool player who, when angered, would start throwing pool balls at the clientele while ordering everyone to, “Get the fuck out, Skippy!  Chop-Chop!”

Earl would be shepherded up the stairs and put to sleep for a couple of hours only to come back down later in a genial mood and buy drinks for everyone. “Get us a round and some shots, Skippy. Chop-Chop!”

After I got shit-canned from the truck rental place (it turned out the guy checked the mileage on the trucks every week and it didn’t help that he found an empty keg  in the back of one of them), I got a job at Huffy’s as a bartender.  My first day, Earl showed me where all of the strategically placed handguns were behind the bar. There was a .25 automatic in the drawer, a 357 Magnum under the bar and, in the cooler (“in case things get really out of hand”), a sawed-off 12-gauge, which he affectionately referred to as “The Big Kid.” He told me the .25 auto was merely to restore order, the 357 was “for emphasis” and the Big Kid was in case of a real emergency, like a stick-up. “Do not, under any circumstance, bitch-up and hand MY money over to criminal motherfuckers… I abhor criminals.”

Needless to say, Huffy’s was a tough place. I spent the first couple of weeks breaking up fights and sometimes fighting for my life in the process. We didn’t get many students; they were smart enough to vacate after a beer, or in the middle of one. It was full of bikers and mechanics and hard-labor guys who didn’t much like the “college pukes.”  They scared the shit out of me, and I was careful to keep my head and learned the gentle art of cutting people off when I sensed  trouble.

This was a culture full of the white people we don’t put on the brochures, with guys named Orville and Roland, a lot of wide foreheads and disappearing chins. I swear some of these guys were their own uncles.

The women were every bit as hard-looking and often wore bruises and black-eyes and fought and drank themselves. It was a hard place—not ten blocks away from the University of Illinois and seemingly another world.

These were the hard-timers, the manual labor work force, that might not, in many cases, even exist anymore: agriculture had learned to go big or go home and a great many of these guys were learning about “trickle-down” economics the hard way. A great many of their jobs went to Mexico after NAFTA, or non-union states.

I had several fistfights; these guys loved to fight. A guy named Daskell Vaughn would come in once a week and insist I fight him. Thankfully, Daskell wasn’t big or particularly tough and was perpetually drunk. But he was plenty crazy. He once threw the cinder-block we used to prop open the door of the place with at me while my back was turned and just missed me. My one friend there, a big, good-natured diesel mechanic named Orrin told me, “Now you have to go put Daskell in the dirt–else you’ll never get any respect from him.” He didn’t really have to tell me that; I was halfway over the bar and I settled Daskell’s hash that day for good. Never had an ounce of trouble from Daskell after that.

I used to bar these guys from the place and Earl would always let them back in. He’d tell me, “They’re good boys; unemployed is all. They all got laid off from Harvester. Makes ‘em mean, when they can’t do a man’s work anymore.”  There was an International Harvester plant not far away that had started laying guys off and a lot of them would cash their unemployment checks at Huffy’s and drink the days away. I learned that the end of the month was a particularly dangerous week to tend bar there.

On my way home every night I’d pass this  landscape of empty truck lots next to a radio tower and there would be this short-eared owl up on the tower hunting mice and rats. On occasion, I’d sit up there with a six-pack of Bud and a cigarette and, from a few hundred feet away, watch him pick off rodents. He’d dive from the tower two or three times an hour and more often then not, fly back with the unlucky mouse in his beak.

As quiet as ice.

[…] Artist Tony Fitzpatrick sure can tell a story. In his latest Dime Story column for New City he recalls a period of time he spent bartending for a rather unsavory cast of characters: “[The bar] was full of bikers and mechanics and hard-labor guys who didn’t much like the ‘college pukes.’ They scared the shit out of me, and I was careful to keep my head and learned the gentle art of cutting people off when I sensed trouble. This was a culture full of the white people we don’t put on the brochures, with guys named Orville and… Read more »