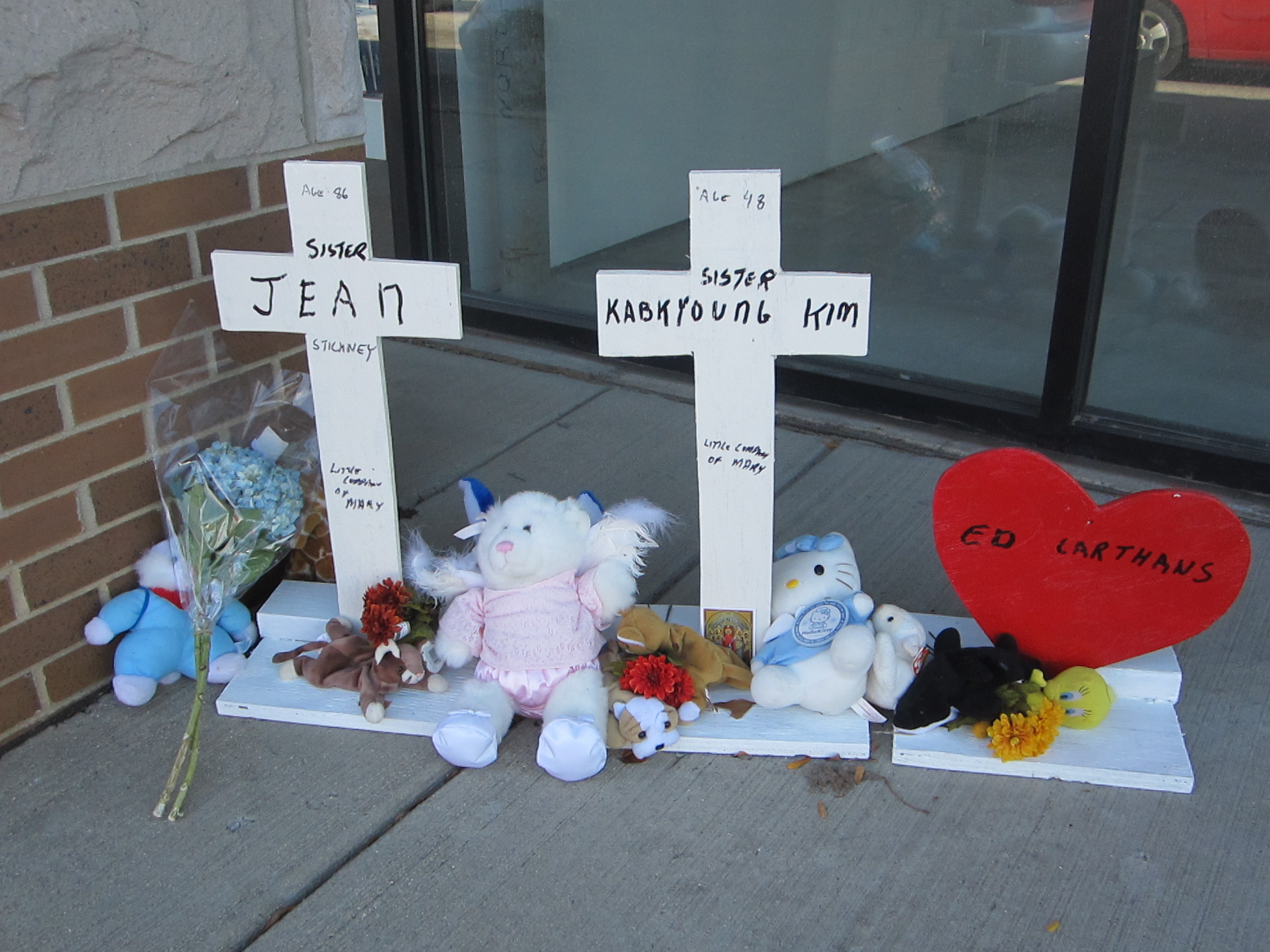 Memorials to the people who died in the Oak Lawn car crash/Photo: John Greenfield

“I avoid 95th Street as much as possible for my safety and sanity,” Beverly resident and transportation advocate Anne Alt told me, in the wake of a horrific multi-car crash on the massive road earlier this month. This senseless disaster in west-suburban Oak Lawn injured almost a dozen people and killed three, including two nuns.

On Sunday, October 5, at around 4:30pm, a man noticed retired contractor Edward Carthans, eighty-one, slumped over the steering wheel of his pickup, police said. Carthans refused help and instead sped west on 95th, colliding with three cars at Keeler. He kept driving, blew a red light at Cicero, and then veered into the eastbound lanes, causing an eleven-car pile-up. After his truck became airborne, he was killed, along with Sister Jean Stickney, eighty-six, and Sister Kab Kyoung Kim, forty-eight, who were driving home from a shopping trip. 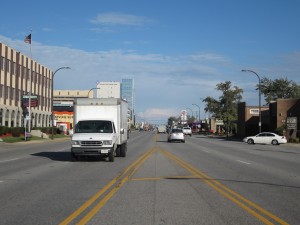 Before this tragedy occurred, I was already planning to walk the length of 95th in Chicago. So far, I’ve hiked more than a dozen streets as part of my ongoing quest to explore every nook and cranny of the city. After 19th Ward Alderman Matthew O’Shea recently blamed Beverly’s lackluster retail scene on a supposed dearth of parking along 95th, a friend suggested I stroll the 7.5-mile street.

When I get off Metra’s SouthWest Service line in Oak Lawn, I gaze at the bleak, seven-lane expanse of 95th and wonder if I’ve bitten off more than I can chew. I get an eerie feeling as I approach 95th and Cicero, where Carthans’ trail of destruction ended.

Next to an empty storefront, there are white wooden crosses for Stickney and Kim, plus a red wooden heart for Carthans. Stuffed animals and flowers are scattered at the bases of the memorials, and nearby someone has lit a votive candle for Saint Jude, the patron saint of lost causes. A wide groove between the sidewalk and the curb is still filled with shattered auto glass.

Not wanting to spend more time on 95th than necessary, I hop a Pace bus a couple miles east to Western Avenue and the Chicago city limits. Now I’m in Beverly, a relatively affluent South Side community. It’s one of the few Chicago neighborhoods where it’s common for whites and African Americans to live side-by-side.

Here, 95th is a more walkable four-lane street but, as Alderman O’Shea complained, there are plenty of empty storefronts on the local retail strip, and there’s a vague atmosphere of stagnation. There are parking lots on almost every block, so I doubt that parking alone is to blame for the slump. 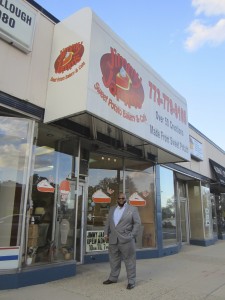 Still, there are some interesting independent businesses on the retail strip. As I’m snapping photos of Jimmy Jamm Sweet Potato Café, a tough-looking guy in shades and a sharp suit gets out of a black car to give me the third degree. It’s Adam “AJ” Jackson, one of the owners. Once I convince him that I am, in fact, a journalist, he gives me his spiel about the fifty different sweet-potato-based delicacies the shop offers. “Even my underwear is made out of sweet potato,” he says. I’m not sure if he’s joking.

At Longwood, I descend one of Chicago’s very few hills to the 95th Street stop on Metra’s Rock Island Line, where a couple of nice Jehovah’s Witness ladies offer me a copy of “Awake!” magazine. At Halsted, I come to the Carter Woodson Library. A spacious, comfortable building, emblazoned with the names of famous black Chicago authors, it’s my favorite place to write on the South Side.

Soon I’m at the 95th Red Line stop, one of the CTA’s busiest stations. It’s undergoing a $240 million renovation that will transform it from its current Soviet-era appearance to a gleaming, Jetsonian structure, which will provide a safer, more pleasant environment for transit riders.

A gigantic full moon is rising to the east as I soldier on through less-and-less populated parts of the city. At Stony Island Avenue, an old woman is panhandling in the middle of the street. A middle-aged guy in a sports coat, crossing westbound, hands her a sparkly chain and crucifix. “What is this?” she asks. “It’s a blessing,” he answers. “Thank you baby, God bless,” she replies. 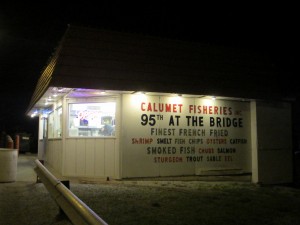 By the time I get to Yates, it seems like there’s nothing but emptiness on either side of me. My legs are aching, the moon is shining in my eyes, and I’m feeling a bit delirious. Suddenly I hear the cry of some strange bird coming from the woods by a railroad embankment. Startled, I pick up the pace.

After I pass under the Chicago Skyway, Calumet Fisheries seafood shack appears like a beacon in the night. Munching fried scallops by the Calumet River, I stare at the massive skyway bridge to the south, lit up like a Christmas tree. The sound of light traffic behind me on 95th is oddly soothing. I’m reminded of the old Tom Petty lyric, “She could hear the cars roll by… like waves crashing on the beach.”

A mile later, I finish my journey in Calumet Park by the Lake Michigan shoreline. The lights and smoke of Indiana steel mills are visible to the south, and the moon shimmering on the water in front of me is dazzling. 95th Street may be an essentially brutal road, but it has its beautiful side as well.