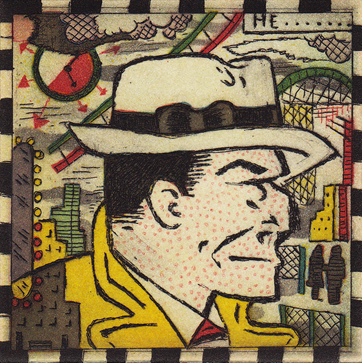 Almost a year ago I decided to move to New Orleans. It was the day before Christmas Eve and my pipes had broken. I’d heard of this happening to other people and knew that it probably sucked but I was unprepared for the freezing filthy water and slimy primordial shit that filled the basement when it happened. Luckily I’m Irish, which means at any given time in my life, I’m related to seven or eight drunken plumbers. They live for this shit—overtime out the ass and other costs due to the fact it is forty below zero. Yeah, it was that day. It was colder than a nun’s ass on Good Friday.

I called the closest plumber and he fixed it skippy quick—it took four hours but it was worth it and I’d have paid anything. Between this, the shoveling, the falling down the front steps and damned near breaking my ample Irish ass, I’d decided I’d had it: Fuck Winter. Fuck Emanuel. Fuck Dibs. Fuck Snow. Fuck Slush. Fuck Mormons ringing your doorbell trying to talk Jesus to you. Fuck it all.

There were signs. Keefer’s, my favorite steakhouse, was closing. Hot Doug’s announced they were closing. The city nickel-and-dimes its citizens to death with their corrupt camera tricks and neon-vested jerk-offs writing tickets whether the infraction is righteous or not. Do I have to even mention the  jimmied yellow lights rigged to fraudulently create more traffic tickets? Oh and Donald Trump, the squinty weasel with the piss-colored pompadour, wrote his name on our skyline.

All the while, the children are murdered by the dozen nearly every weekend.

It felt to me that the city had misplaced its  moral compass, its sense of scale of what is  important. Education. Jobs. Policing the city in an equitable way and safeguarding its most vulnerable citizens.

It also felt like time to go. I’d been going to New Orleans for nearly thirty years. It was there that I got my first big break and was able to make drawings for a living. I was hired to make the album art for  The Neville Brothers’ “Yellow Moon” LP (LP—that’s how long ago it was) and from that day on never worked for anyone other than myself. It was a place I felt I could breathe, let my guard down, and just be.

It is a magical place where people have music in their heads and they take the time to dance to it. It is a big part of my heart.

I made a few trips to find a house, only to find a great many others have the same thing in mind. That, and since a new movie studio opened in the lower Garden District, New Orleans has new industry, and a new demand for housing. In other words, the time to buy would have been a few years ago when I first started thinking about it.

I could still afford it but it’d have been a stretch, and at fifty-five years old, I only have so much stretch left in me.

I also began to think about leaving Chicago. I’ve had a good long time to think about it and in the long haul of the pros and cons, I’ve decided I can’t do it. This city is the best story I’ve ever observed and been part of, and I don’t want to miss any.

This year I had an exhibition at the Poetry Foundation. It was not only the best experience I’d ever had with a show, but we’d done a performance of a piece I’ve worked on for a long time: “The Secret Birds.” Along with me, it featured Poi Dog Pondering’s  gang of geniuses—Frank Orrall, Susan Voelz, Robert Cornelius, Mighty Max Crawford and Paul Mertens—as well as the lustrous Martha Lavey, who played the last passenger pigeon, and it brought down the house. I began to see a lot more possibility in this show.

Something else happened—a couple hundred people didn’t get in.

I didn’t know this before the show; I was back stage and concentrating on not sucking. Other people told me and I was deeply moved. Martha Lavey looked me in the eye after the show and told me I’d be a fool to leave. She was right. She’s always right.

A couple of weeks later, “The Midnight City” opened at the Steppenwolf Garage. Toward the end of the play, my co-star, pal, partner and sometimes conscience Stan Klein asks me in his knowing way: “Do you honestly think you’re anything other than a Chicagoan?”

In the play, I never answer that question. Today I will. My work is still in front of me here. In this great, perplexing, confounding, contradictory, cruel and luminously beautiful city.

And thank you to those who reminded me that, cradle-to-grave, I’m a Chicagoan.