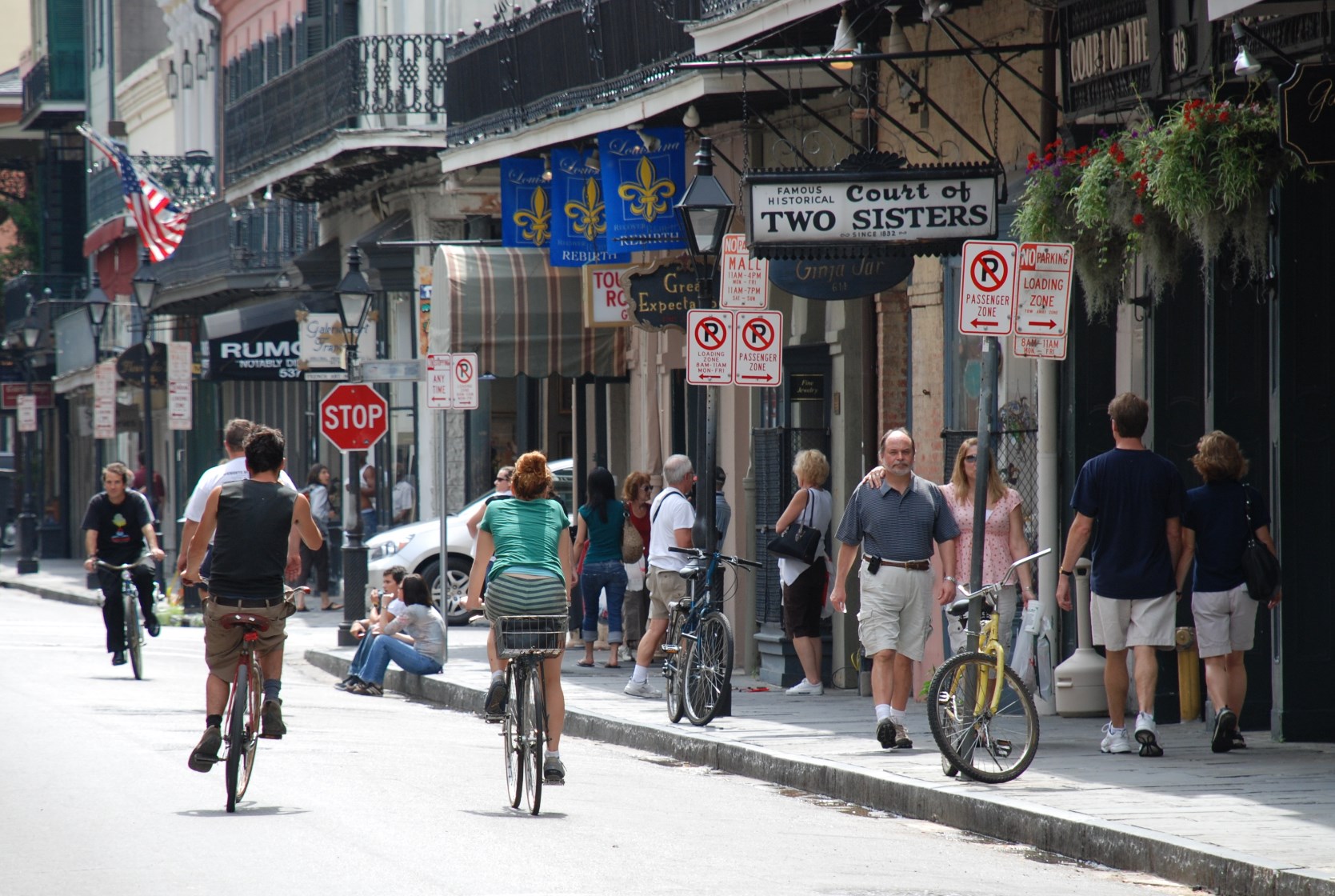 Biking on Royal Street in the French Quarter/Photo: Dan Jatres

If you’re a Chicagoan and haven’t made it to New Orleans yet, what’s stopping you? Though it’s on the other side of the continental U.S., and a world away culture-wise, it’s only a 13.5-hour drive. Better yet, catch Amtrak’s City of New Orleans train, immortalized in the eponymous Steve Goodman song.

The train trip is six hours longer, but it’s time well spent. You can get work done, chat with fellow rail fans, and check out spectacular views of Mississippi cypress groves and Louisiana bayous from the glassed-in observation car. Best of all, unlike on a car trip, you can drink booze. On my recent southbound journey to check out the Big Easy’s raucous Halloween celebration, things got downright rowdy in the café car by the time the train was skirting Lake Pontchartrain.

In the interest of mixing business with pleasure, I met up with Dan Jatres, pedestrian and bike program manager for the New Orleans Regional Planning Commission, to grill him about the local transportation scene. A Philadelphia native, Dan moved to the Crescent City thirteen years ago for college. When Hurricane Katrina struck in 2005, he moved back north, but soon felt himself being drawn back again.

“New Orleans has a way of sucking you in,” Jatres explains. “It’s very different than pretty much anywhere else in the country. The culture is really fascinating, whether it’s the food or the music, or just the mindset of the people.”

That mindset is becoming increasingly bike-friendly. In this city of 378,715 people, about 3.5 percent of trips to work are currently made by bicycle, roughly twice Chicago’s mode share. That’s remarkable when you consider that, a decade ago, New Orleans had only ten miles of bikeways. Now it has about 100, most of which were installed after Katrina, largely thanks to roadway resurfacing projects paid for by recovery funds. By comparison, Chicago, with seven times as many people, has around 200 miles of bike lanes and thirty-six miles of off-street paths.

Bike lanes have been added to many NOLA streets via “road diets,” which have narrowed overly wide car lanes, or reduced the number of car lanes, to create spaces for cycling. Similar steps have been taken on Chicago thoroughfares like 55th Street and Lawrence Avenue.

Aside from the Crescent City’s burgeoning bike network, Jatres attributes the high level of cycling to the fact that twenty-to-thirty percent of households don’t own cars. The mild weather—except for steamy summers—and flat topography help as well. Founded almost three centuries ago, it’s an old city whose street grid is still fairly intact so, as in Chicago, it’s easy to use quiet residential streets as an alternative to arterials.

The grid, plus the city’s compact size, also makes New Orleans a nice place to walk. In the historic, touristy French Quarter, motorized traffic moves slowly on the narrow streets, and strolling in the roadway is generally tolerated. Notoriously debauched Bourbon Street is pedestrianized at night, and seven blocks of adjacent Royal Street are closed to cars during the day. 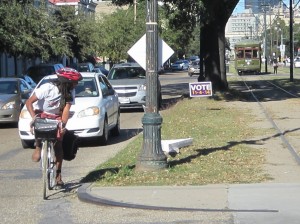 Mass transit in New Orleans consists of buses, streetcars and Mississippi River ferries—there’s no equivalent of Chicago’s Metra commuter rail system. “Our transit system still hasn’t recovered to pre-Katrina scale,” Jatres says. “But ridership is growing each year and, earlier this fall, the Regional Transit Authority added a handful of new lines.” Charmingly, the RTA buses are decorated in the purple, yellow, and green colors of Mardi Gras.

On the gorgeous Saturday morning after Halloween, Jatres picked me up from my homestay in the Tremé neighborhood for a pedal around the city. You can view the route at TinyURL.com/NOLARolling

First, we stopped by a nearby school where a local nonprofit called Where Ya’ Rack (“Where Is Your Rack?”) has installed bike parking fixtures. The racks feature the image of a U-lock with a fleur-de-lis—a symbol of New Orleans—inside it. The group calls the design the “fleur-de-lock.”

We head over to Lafitte Avenue, named for New Orleans’ most famous pirate and privateer, Jean Lafitte. Here, the city is building Lafitte Greenway, an off-street trail and linear park, on green space that was formerly a navigation channel.

Next, we pick up the Jefferson Davis Trail, one of the city’s oldest bike facilities, which takes us to Tulane University. The school has pedestrianized a street running through the middle of campus, and Jatres says it’s a vast improvement.

From there, we pedal through the tony Garden District, and then grab some toothsome shrimp po’ boys at a dive bar called Parasol’s. We end our trip at the Avenue Pub in the Lower Garden District, which has an on-street bike parking corral, also installed by Where Ya’ Rack. New Orleans currently has nine bike corrals; Chicago recently reached seventeen, with the addition of corrals at On the Route Bicycles in Lakeview and the Fat Cat bar in Uptown.

As we pedal by Willie Mae’s Scotch House, a soul food eatery where people are lined up for lunch, Jatres notes that a perk of biking in New Orleans is picking up aromas from the city’s awesome restaurants. “Whether it’s fried chicken from Wille Mae’s or the smell of crawfish boils in the springtime, that’s one of my favorite aspects.”