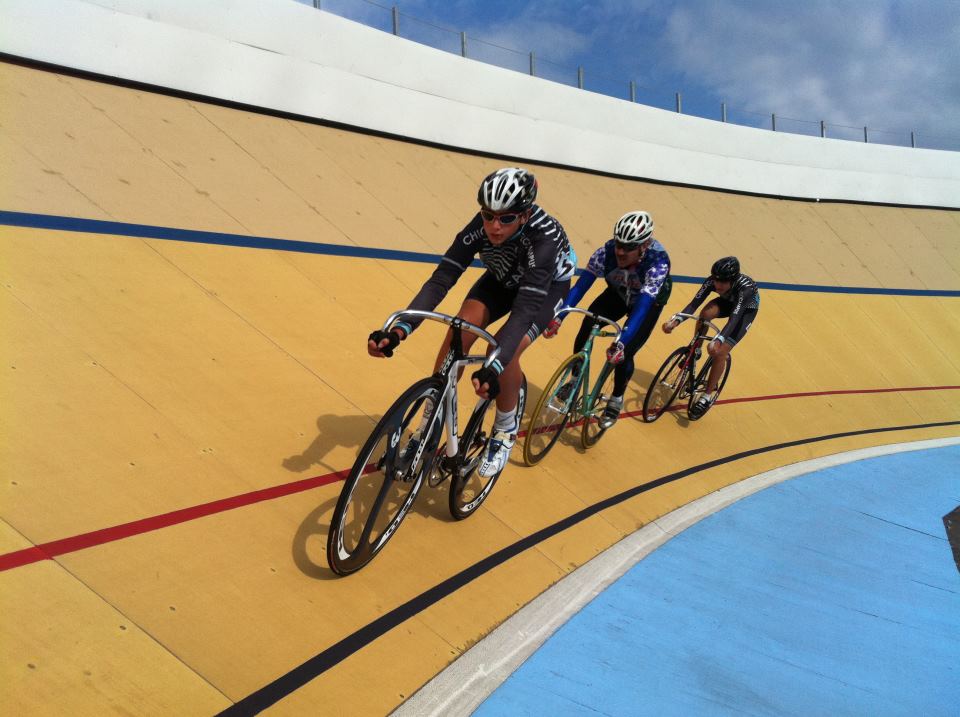 Taking a spin on the outdoor track/Photo: Chicago Velo Campus

Sadly, it looks like bike racer Emanuele Bianchi’s dream of building the $45 million Chicago Velo Campus indoor sports complex has come to the end of the road. Even the small outdoor velodrome he and his partners installed on the Southeast Side as a temporary facility is slated to be dismantled. However, there’s a glimmer of hope that that bike track—the only one in the city—can be saved, thanks to Chicago bike-scene mainstay Marcus Moore.

“Our goal isn’t just to build the best velodrome in the Midwest or in the country but in the world,” said Bianchi with a gleam in his eye back in 2010, when I interviewed him for a Newcity cover story. He and fellow racing enthusiasts had recently formed the Chicago Velo Campus corporation and announced an audacious scheme to build a stadium almost as big as the United Center by 2013.

Bianchi and company planned to build the facility on the former site of U.S. Steel’s South Works, a bulge in the shoreline between 79th and 92nd Streets. They promoted it as the future centerpiece of Lakeside, an upscale, 500-acre community proposed for the site by developer McCaffery Interests.

As the velo campus’ president, Bianchi said the indoor facility would include the 250-meter velodrome, plus a dazzling array of other amenities. There’d be an Olympic-sized swimming pool, a 400-meter running track, a fitness center, restaurants, a cycling museum and even a wind tunnel.

A few local racers I interviewed scoffed at the notion that such a grandiose, expensive project could come together so quickly. However, the following summer, Bianchi and his cohorts chalked up a big win by opening the 166-meter, portable track on U.S. Steel land at 8615 South Burley. They also set up a trailer on the property, which hosted bike-mechanics classes and racing clinics for kids from the neighboring, low-income South Chicago community and beyond.

However, after holding adult races and youth programs for a few years, Bianchi and his colleagues say they’re shutting down the outdoor velodrome. “It was hard to find volunteers to help out, and we got exhausted and called it the end of it,” he told me last week. “So there’s no more velodrome. It’s still there, but the plan is to disassemble it.”

Bianchi referred me to Arlette Vollrath, a racer who currently heads the corporation, for details on why the air went out of the project. She explained that the outdoor track was leased from V-Worldwide, a velodrome manufacturer based in suburban Detroit. “The lease had ended, so we had the option of purchasing it, but we didn’t have the $150,000,” she said.

Vollrath added that the underlying problem was that the number of volunteers to run the velodrome, and participants for its events, had dwindled over the years. “We believe that the current state of the Chicago Velo Campus is due to a severe lack of support from the Chicago cycling community.” She added that Bianchi gradually became burned out after spending countless hours, and tens of thousands of dollars, trying to keep the track alive.

Needless to say, the plan to build the indoor complex is dead in the water. “If the outdoor velodrome was unsuccessful, I don’t know how we’d be able to do a huge $45 million project,” Vollrath said. “We’re deeply saddened that we couldn’t make this work.”

But perhaps all is not yet lost—Marcus Moore has launched a grassroots effort to save the outdoor track. In contrast to Bianchi, a sharp-dressed Italian immigrant who owns a luxury pet accessory business, Moore is a scruffy, bespectacled ex-messenger. He’s the longtime owner of Yojimbo’s Garage, a hole-in-the-wall bike shop that’s a stone’s throw from where the Cabrini Green high-rises used to stand.

“What I’ve heard is that if the velodrome is run transparently, with more input from the bike community and the neighbors, a lot more people will be interested in being involved,” Moore told me. “It’s got to be a community effort to be successful, which wasn’t the case with the previous management, and that’s why a lot of people were turned off.”

Moore is forming a new organization to try to keep the track in Chicago. A brainstorming bulletin board is up at chicagovelodrome.com/forum. Dismantling and reassembling the track in another location would cost more than $10,000, so he has contacted McCaffery Interests about leaving the facility in its current location. The developer didn’t respond to an interview request by press time.

Assuming U.S. Steel and McCaffery are OK with the velodrome remaining in place, Moore and his allies will need to raise the $150,000 to buy the track, plus additional cash for routine maintenance and ongoing operations. He thinks that live-streaming the races and creating track-related videos and smartphone apps could help engage more spectators and create revenue. “We hope donations will save the track, but ad money could make it sustainable.”

“There aren’t many of these kind of tracks around anymore, and people really enjoy riding them,” he added. “It’s a special facility that deserves to be saved. I’m hoping that people will come out of the woodwork to make this happen.”

[…] Successful Campaign to Save South Chicago Velodrome, Racing Set to Resume This Summer […]

[…] a longtime bike advocate who recently won an award from the Mayor’s Bicycle Advisory Council for saving the South Chicago Velodrome, and he witnessed Cann’s fatal crash. However, DNA quoted him as saying the parking conversions […]

[…] existing or planned bike amenities, including the Major Taylor Trail, the Burnham Greenway, the South Chicago Velodrome, and Big Marsh bike park, and the nearby city of Hammond, Indiana, has been doing “a lot of […]

[…] may know Moore as the guy who led the successful campaign to save the South Chicago Velodrome. It’s fortunate that he’s there on Clybourn to keep an eye on the bike lanes, which are […]

Once Again, the South Chicago Velodrome Is in Danger of Closing | Streetsblog Chicago

[…] track, which also hosts youth education programs. Bike mechanic Marcus Moore, who spearheaded the campaign to save the track last year after its original owner gave up on running it, says he’s now getting burned out himself after […]