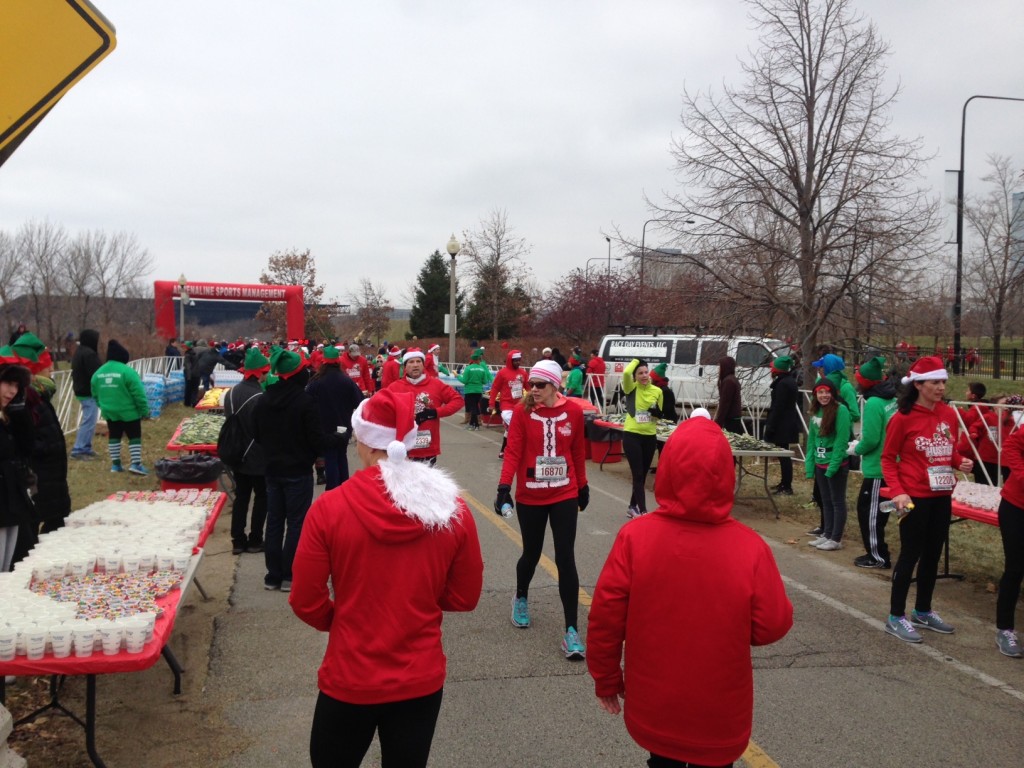 Breakdown: Six years in and the Adrenaline Sports Management (ASM) Santa Hustle 5K is now officially in eight locations across the country. When I last ran this race two years ago, Chicago was the first and largest of the series, and while Chicago may still boast the largest turnout (with around 5,500 hustling Santas participating this year), the South Portland, Maine race kicked off last month and today’s starting time was shared with around 2,000 Milwaukee Santa Hustlers.

These days, there is no shortage of gimmicky races in the Chicago area, each providing varying degrees of cheesy fun. With cookies and milk on the course and at the finish line (along with candy and, yes, even water), a mascot-like Rudolph on hand for photos and a Santa hat and beard provided for dressing up on race day, the Santa Hustle easily succeeds in the “healthy holiday fun” category but, crucially, it also manages to provide a well-supported starting line, course and basecamp for runners who enjoy race legitimacy with their fun runs.

Best of all, the weather (almost) cooperated, with temperatures in the mid-thirties allowing for plenty of warmth while wearing the kitschy-comfy red Santa Hustle sweatshirt. This year several other Santa Hustles included a half-marathon option. Here’s hoping Chicago expands to include a longer distance in the future—ASM is ready to coordinate it. As the saying goes, “If you build it, the Santas will hustle it.”

Course: Starts and finishes just south of Soldier Field. Large pace corrals kept the course (mostly open and on the Lakefront Trail) from getting too crowded and the majority of runners grouped themselves appropriately. It’s not often you get cookies, milk and M&Ms at support stations, delivered by volunteers dressed as elves.

Organization (gear check, etc.): Early packet pickup at Fleet Feet-Old Town was swift and efficient and morning of pickup before the race looked the same. Gear check was equally smooth.

Goodie Bag (includes shirt): Along with a cheap Santa beard and hat that lets runners look festive on race day the red Santa Hustle sweatshirt is as comfy as they come, if a bit too holiday-specific for wearing out of season.

Weather: Mid-thirties. After the November Chicago had, it felt almost balmy. A strong headwind on the return trip up the Lakefront Trail. (Zach Freeman)

The Santa Hustle 5K took place at Soldier Field at 9am on Saturday, December 6. santahustle.com/chicago