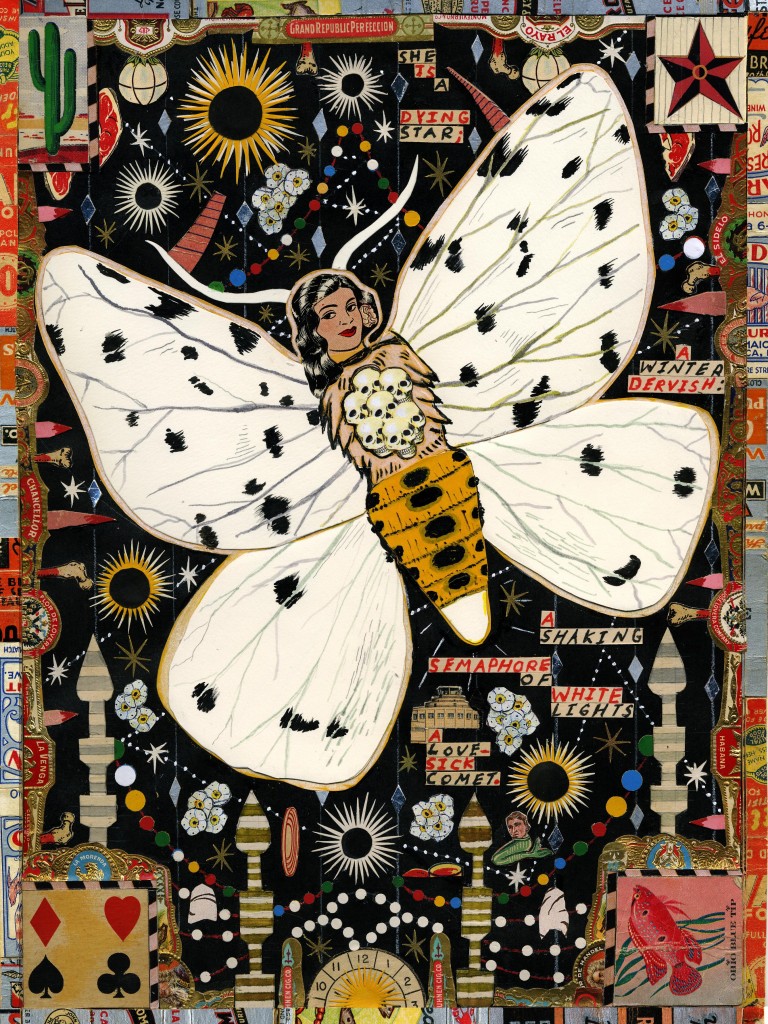 When I was a senior in high school, my girlfriend, Denise, got her hands on a shit-ton of pink mescaline right before Christmas break. She was a pretty girl with huge brown eyes and a world-class rack, who had an immense appetite for life. I had never done mescaline before and the night I decided to try it with my friends, she had to work. She worked at a geriatric home in Wheaton and used to go in tripping. She was gentle and careful and with a head full of mescaline was really easily entertained by the old folks.

Me and my friends each ate a microdot of this stuff and decided to go see “The Omen,” which was a horror movie; nothing like a scary movie when you’re tripping to put you in the yuletide spirit. About ten minutes into the experience I turned to my friends and told them nothing was happening except I was vaguely giggly, so I demanded another microdot. Well, an hour later we went to the movie and it was really boring for the first five minutes until Damien, the son of the devil, is having his birthday party. And right when I was starting to peak, Damien’s nanny appears on a ledge sweetly calling to Damien, and then, as we notice the rope around her neck, she  steps off the ledge and  hangs herself. FUCK!!! JESUS CHRIST!!! Did she???

We then exploded into screeching laughter and applause. And all of the seats around us emptied.

Up on the screen, Gregory Peck and Lee Remick, Damien’s parents, look like they are about to spot their shorts. It was a fucking riot—I laughed so hard I almost passed out.

My pal Joe looked at me in the dark and  asked: “Is it me … or did the nanny just pull the Dutch trick?”

I assured him that the Nanny had, indeed, just hung the fuck out of herself and that this movie was a classic and the acid was kicking in big-time. We made a lot of noise and at one point might have started even applauding again. This towheaded usher we knew as Eggy came over with his flashlight and asked us to keep it down.

“Chill with the flashlight Eggy, or you will be looking up your own hole with it… Dipshit.”

“Get us some popcorn, Jag-Bag!”

Eggy made tracks and avoided us, as did the other ushers, for the rest of the evening.

And then it just got more weird. Damien  whacks his mother and poor Lee (already in traction) gets tossed ass-over-teakettle by some crazy bitch out the twentieth-story hospital room and lands on the roof of an ambulance–or through the roof, I should say. A bunch of Satan dogs try to bite the balls off of Gregory Peck in a graveyard and it is a good-faith effort—they maul his ass, but good. There is also an impaling and a quality lopping-off-of-the-head which, as always, is a nice touch. By the end of it, the son of the devil has stomped a fucking mud-hole in the Jesus people. We laughed our asses off and stayed for the next show as well just to catch the hanging nanny scene again, all of it enhanced by  mild hallucination and Schlitz Malt Liquor. This was the best Christmas break ever.

If you could sleep on the shit you had whack-job dreams that were wonderfully vivid in that you could remember them. Tripping at school was way too dangerous, in that you felt like everyone was watching you and everyone was, because  you were FUCKED UP and you’d be sporting a smile bigger than John Candy’s ass-crack and no matter what anyone told you, it was funny. “Hey, Tony, they just blew up an orphanage” would be a laugh riot, or “Tony, you’re failing three subjects,” sheer fucking lunacy. It also made awful shitty dreck like Carlos Castaneda seem deep and “The Lord of the Rings” became a great moral tale.  It made Euro-rock bearable, which was the particular taste of my friends. You could spend hours trying to figure out asinine shit like “Close Encounters” and “2001.”  Mescaline made these things not only bearable, but entertaining.

I can remember listening to a pert and perfect redhead babble like a rabid gerbil some indecipherable horse-shit about Nostradamus, all the while waiting for the mescaline to carbonate her hormones. It was a long  night. The way it went was, you would listen to every drool-case thought about Nostradamus and nod your head. She would then discern that this moment was meant to be—that you truly understood her—that you were “connected” and that you should both christen this moment.

She would get the same brainstorm every time: “Hey,” she would whisper, “we should go to my van and fuck.” I concur!

I would be lying if I said there were not times that I miss drugs and admit that, until they fuck you up, they could be a good time. There is nothing like going Christmas caroling, ripped to the bejesus, on acid.

Knocking on some poor taxpayer’s door and launching into a gut-ripping rendition of “Black Betty” by Ram Jam. Six pie-eyed mutants singing the song, and six more singing “Bam-De-Lam.” Honestly when you’re seriously wrecked it is precision work and this, being the Yuletide season, I recommend it. I don’t recommend the “Little Drummer Boy”—all of that “Ba-rump-a-bum-bum” stuff makes your lips numb and you’ll start laughing. Stick with the easy shit.