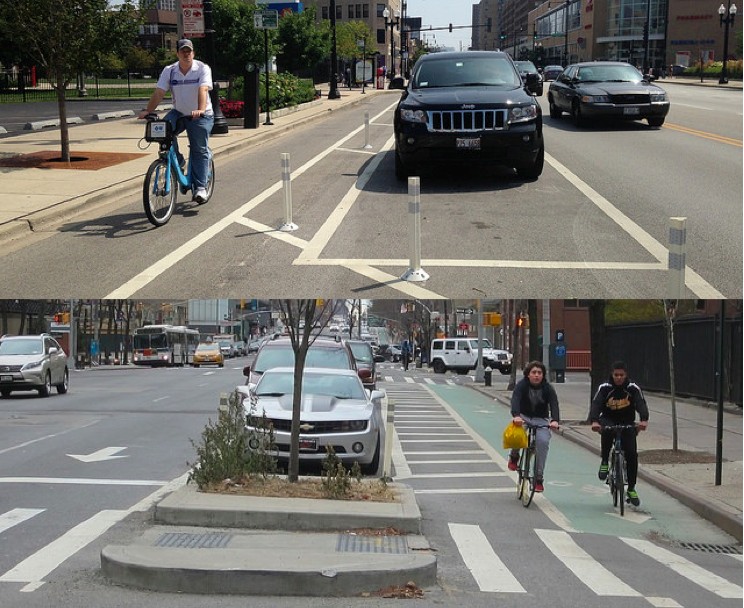 There’s nothing like visiting another city to give you a fresh perspective on your own. Earlier this month I traveled to New York to powwow with other reporters from the transportation news network I work for. Pedaling a Citi Bike around Manhattan, I was struck by the thought that Chicago’s protected bike lanes could be a little nicer than they are.

In both cities, PBLs are generally located curbside, with parked cars relocated to the left of the bike lane to shield cyclists from moving vehicles, and a striped buffer marked between the parking lane and the bike lane. In Chicago, flexible plastic posts, AKA bollards, are installed in the buffer to discourage motorists from driving and parking in the lanes.

New York protected lanes usually don’t have the posts, but there’s generally an extra-wide buffer, and the entire bike lane is painted green. Often, the parking lane is capped with a concrete pedestrian island at the intersection.

That helps remind other road users that PBLs improve safety for everybody—not just cyclists—by shortening crossing distances for pedestrians and calming motor vehicle traffic. We don’t have safety stats for Chicago protected lanes yet, but a study by the city of New York found that the installation of a PBL on Manhattan’s 9th Avenue led to a fifty-six-percent decrease in injuries to all road users.

It occurred to me that Chicago might do well to emulate the New York style of protected lanes. Despite the lack of bollards, I didn’t notice any problems with cars in the lanes during my visit. Meanwhile, the posts by Chicago PBLs often start looking ragged after a few months, and they’re frequently knocked out by car drivers and snowplow operators.

It seems that the Chicago Department of Transportation could save the trouble and expense of replacing the bollards, which cost about $90 each installed, by getting rid of them altogether and painting the lanes green instead. Judging from New York, drivers wouldn’t be any more likely to park in the lanes—the colored pavement might actually make it more obvious that these are bike-only zones.

Moreover, the lanes would look a little nicer without the sometimes-gnarly posts, which could help cut down on objections to proposed lanes from neighbors. Pedestrian islands would also be a great addition to our PBLs, although they’d be an added expense. CDOT didn’t respond to my inquiry about these ideas.

Another thing happened in New York that changed my perspective on Chicago bikeways. While I was drinking in an East Village dive bar with one of my NYC colleagues, we discussed Rahm Emanuel’s stated goal of building 100 miles of protected lanes within his first term. His Chicago 2011 Transition Plan, released shortly before he took office, included this bold objective, as well as similarly audacious proposals to launch a bike-share system with thousands of cycles, and to build the Bloomingdale Trail by 2015.

Divvy is already a runaway success, and the elevated greenway is slated to open in June. Building the PBLs has proven to be a thornier task. The transition plan defined protected lanes as being “separated from traveling cars and sit[ting] between the sidewalk and a row of parked cars that shield cyclists from street traffic.” However, by late 2012, after a couple of incidents in which community members and their aldermen killed PBL projects, the city had quietly changed its bike lane terminology.

Buffered bike lanes, which are located to the left of the parking lane, with extra space striped on one or both sides of the bike lane, but no physical protection from traffic, are now referred to as “buffer-protected.” Real, physically protected lanes are called “barrier-protected.”

“It’s a lie for them to say they’re building 100 miles of protected lanes,” my usually mild-mannered coworker said over his pint. “No one else in the country counts buffered lanes as protected lanes.” He was right: neither the Active Transportation Alliance, nor the National Association of City Transportation Officials, nor anyone else in the world seems to define lanes that offer no physical protection as being “protected.”

As things stand, it looks like Chicago is going to exceed the 100-mile goal next year, but the lion’s share of the new lanes will be buffered, not protected. Of the eighty-five miles of “next-generation” bikeways that have been installed since Emanuel took office, 66.5 miles have been buffered while only 18.5 miles have been real PBLs.

Another 31.5 miles of buffered or protected lanes that have been designed are slated for installation by the end of this spring. Even if all of those wind up being protected, we’ll still wind up with only 50 miles of actual protected lanes. As a result, when Emanuel cuts the ribbon on “The 100th mile of protected bike lanes,” that claim will ring a bit hollow.

However, it’s important to keep things in perspective. Prior to 2011, Chicago had exactly zero miles of buffered or protected lanes. The city hadn’t even broken its taboo against building bike lanes in the Loop.

Even if we wind up with only 18.5 miles of true PBLs and ninety-eight miles of BBLs, we’ll still have a more extensive bike network than almost any other U.S. city. Only New York, with thirty-one miles of protected lanes, will have more PBLs than us. Sure, it will be a little disappointing that more of Chicago’s new lanes aren’t truly protected. However, in the grand scheme of things, that’s a good problem to have.