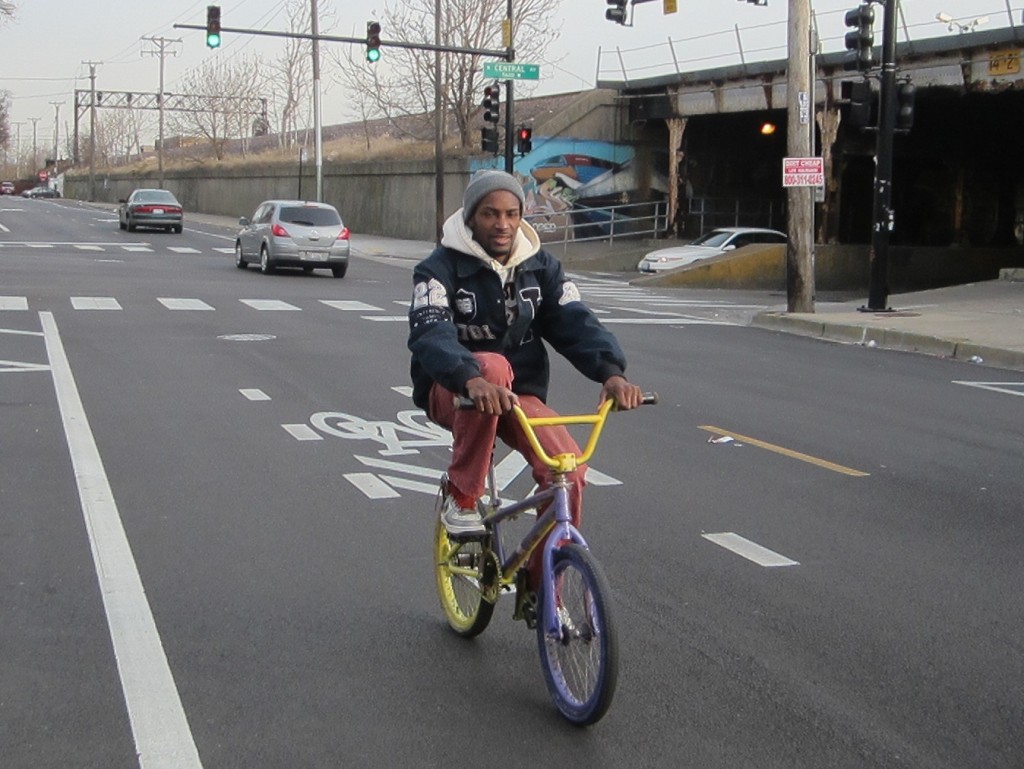 They noted that there’s generally a higher density of bike lanes, with better connectivity, downtown and on the North Side. “Stuff on the South Side and the West Side has really been hit-or-miss, putting in a bike lane that goes from nowhere to nowhere, not really connecting destinations,” Taylor told me.

That’s the case with a couple of the recently striped bikeways I checked out on the West and South Sides last week. The city installed segments of buffered bike lanes–with additional space striped on one or both sides–on Pershing between Western and Ashland, and on 63rd between Central Park and Western, as part of successful road diets. However the new BBLs are “orphans,” because they don’t link up with any other bikeways.

I take advantage of blue skies and above-freezing weather to take a fairly epic reconnaissance ride. Setting off from Uptown, I stairstep southwest to West Humboldt Park, where the Chicago Department of Transportation put in new buffered lanes on Augusta from Grand to Central Park as part of a repaving project.

The new asphalt is silky smooth, and the wide bike lanes seem to help calm traffic by narrowing the car lanes. As I pedal by, I notice a couple of intersections where young men stand in the street, apparently keeping a lookout. They glare at me when they see I have a camera, and the air is perfumed with marijuana.

I’m reminded of one reason South and West Side aldermen have generally showed less interest in bike infrastructure than their North Side colleagues: They feel they have bigger fish to fry, in terms of crime and employment issues. However, Reed told me that fewer bike lanes in black neighborhoods means African Americans miss out on the safety, health and economic benefits of bikeable streets. “Our communities are the ones that need those benefits the most.”

Next, I stop by the 4700 block of West Division, where Aimer Robledo, thirty, was killed on his bicycle in the early hours of New Year’s Day. Robledo, a DJ, was riding home after visiting his young daughters when the driver of a dark-colored minivan struck him and fled the scene. I see that this section of Division has few intersections and overly wide lanes, which encourages speeding.

I head south to the Austin neighborhood, where I refuel with an enormous, spicy Jamaican steak taco at The Jerk Taco Man, 604 North Cicero. It’s got enough deliciously chewy meat to give a La Pasadita burrito a run for the money.

From there I head to Lake Street, which already had protected bike lanes from Damen to Laramie, although I’m guessing that not many people really want to pedal in the gloomy, cacophonous space under the Green Line tracks. When I pass the Laramie station, a fellow standing outside is crooning “Cupid” by Sam Cooke.

The Lake bikeway was recently extended a mile west to Oak Park as buffered lanes, although there’s a short section with “enhanced sharrows”–bike symbols and chevrons with dashed lines on either side, marked in the center of the travel lanes. Signs remind drivers that “Bicyclists may use full lane.”

Returning east, I test-ride new BBLs that lead from Garfield Park to the West Loop along Warren and Washington. Then I return to California Avenue to examine buffered lanes between 26th and 31st, by the Cook County courthouse and jail.

On my way down, I’m dismayed to see that the hand-painted billboard for Wallace’s Catfish Corner, California and Madison, featuring a grinning catfish, has been covered with a political banner. It’s advertising 27th Ward aldermanic challenger Gabe Beukinga, the spitting image of the young Richard M. Daley.

The new California BBLs are striped on more glassy-smooth asphalt. From there, I make my way to Pershing and Western, passing by the bustling skating rink in McKinley Park.

The road diet on Pershing was a “four-to-three conversion”–four lanes were converted to a car lane in each direction, a turn lane, and buffered bike lanes. The result is a much more civilized street, which is safer for pedestrians, drivers and cyclists alike but, again, the BBLs are basically bike lanes to nowhere at this point.

In Back of the Yards, I pass by the defunct headquarters of the Rebel Knights, an outlaw motorcycle gang. Gazing at their badass logo emblazoned on the wall, a fanged skull in a Viking helmet with an eye patch, I think I’ve just found my new forearm tattoo design. Just kidding.

63rd has undergone the same kind of four-to-three road diet with BBLs as Pershing. This configuration really should be the default layout for medium-sized Chicago streets. West of California, there are Mexican-American taquerias and western-wear shops, plus a few establishments with Arabic script, left over from when the neighborhood had a large Middle Eastern population. The area east of California is largely African-American.

The road diet, plus a pedestrian island or two, have definitely created a better situation for walking and biking, which will help local businesses. But it would be great if CDOT extended the bike lanes to connect them to other bikeways. As the black advocates have pointed out, the South and West Sides need more miles of bike lanes, but they also need the lanes to link up, so that they actually take people where they want to go.