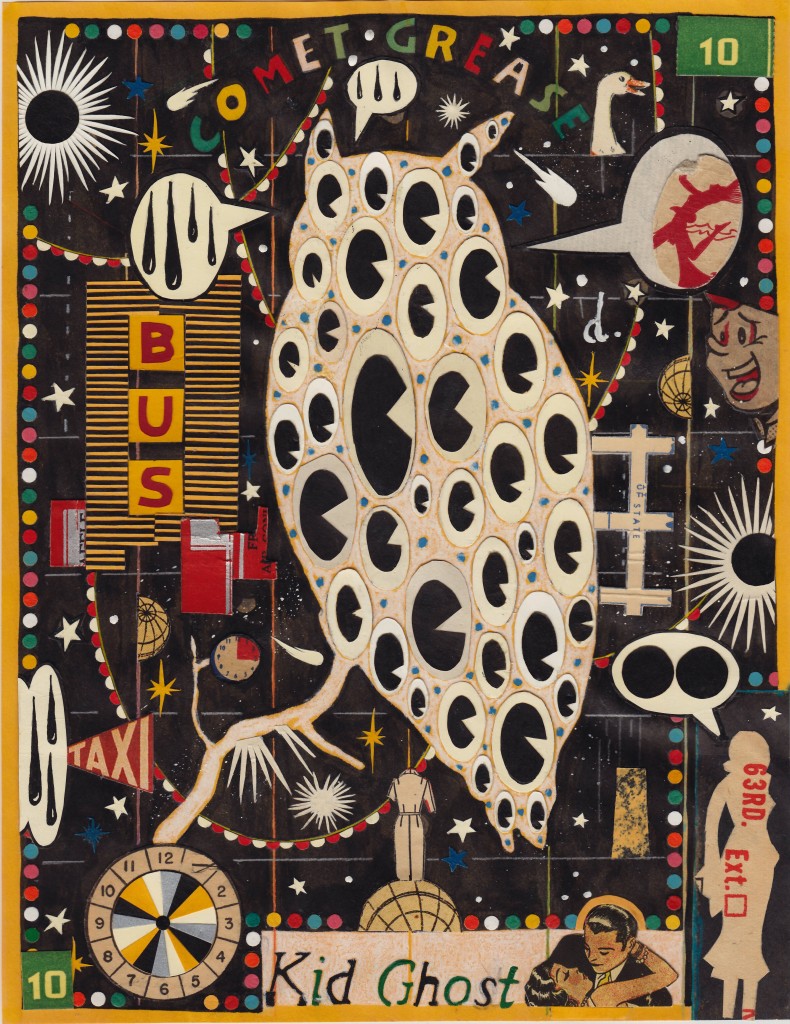 My first job out of college was managing the Burger King that was there. It was right before they shut down the place, so I was there for the tail end of the crazy. What I remember most when I walked through the bus station, in the waiting areas and on the walls, was the layer of funk that only diesel fumes, dirt, stale urine and extreme hot and cold can bring. Add to that, the rubbed-off silhouettes of butt cheeks on gray-blue plastic seats, with the grime all around. It smelled like gas fumes and dirty belly buttons. I never thought I would think that the inside of a Burger King would give me the feeling of “Fresh Air”, but at that bus station, it sure as heck did. Yeah, a part of me misses that place.
—Maureen Sweeney, real estate executive, child of the seventies

Lunch Drawing # 70, “Motor Gypsy”: this drawing and story has its genesis in remembering ditching high school and going downtown to hang around the Greyhound Bus station: where you could buy cigarettes, cans of Schlitz Malt Liquor, fuck-books and rolling papers—and nobody carded you because nobody gave a good god-damn. It was at Clark and Randolph and it was a pungent, down-at-the-heels purgatory for transients, people who had to travel economically, students and those down on their luck—all forced to ride the Dog. The hind-tit of American mass transportation.

This place is where any questions about “class”—or rich and poor—in America began to take shape for me. This drawing is about remembering that place; I miss it. Every time I hear Steve Earle sing “Continental Trailways Blues” or think about Denis Johnson’s brilliant novel “Angels” which, in part, takes place on a long, sad, bus ride from Oakland to Chicago, I think about this way-station for the American Dream.

I remember the shoeshine guys—there were only about four of them. The real money was to be made at Union Station on Jackson, or the North Western terminal at Madison and Canal and to work there you had to be presentable. These shoeshine guys were decidedly the B-team—a couple of them sharing a box and brushes. Nine or ten teeth between three of them, furtively passing a short-dog of brandy around.

One guy was an albino, who endured no small amount of torment from the punk kids, pimp-types and he-men peacocks doing their own slow roll, preening, perp-walks through the place in the middle of the afternoon. He would ignore the indignities heaped upon him as if he didn’t even hear them—all of the time his lips moving like some silent prayer to some silent god. If these comments bothered him, you’d never have known it. He just manned his chair with his neon whiteness and pink eyes like a chess piece of otherness.

He was also, consequently, the best shoeshine guy there, hands moving like a sushi chef. He was quick, with an economy of motion that was hypnotic to watch and all the Marines and sailors and Army guys went to him.

There were two floors below street level and they were completely devoid of any sunlight—a pinball arcade that actually attracted some money players, and every other kind of hustler on all five of its floors.

At the time Chicago had three daily newspapers. The greatest of them was the Daily News—the afternoon paper. It carried Royko, John Schulian, the still-great sports scribe, Rick Kogan and a host of other newspaper legends. And it was the last great paper in America—everything the Tribune and the Sun-Times weren’t. Sadly, even this mighty roster could not hold off the incursion of afternoon TV news, with its blow-dried newsreaders and happy talk.

Around 3:30pm, a pile of afternoon papers would hit the sidewalk and people from the city would scramble for them. It was kind of how you knew who was who—the suburbanite commuters were more likely to read the Trib or the Sun-Times in the morning. The City people grabbed up the Daily News, or maybe it only seemed that way.

A lot of guys went to the bus station to buy loose joints and harder stuff, eyeballing the newly arrived girls from east bum-fuck who’d never been to the city before; keeping an eye out for the cops. It wasn’t like today where you could explain your right to be anywhere you wanted. These were Old Man Daley’s cops and if you made one peep about your “rights,” they would assure you of the right to get your ass thoroughly kicked—and promptly assert that right. You learned to give them a wide berth and to not be seen around the public-area chairs too much. If you did that, they got an idea about you and this you did not want.

I used to draw in there once in a while when I had a job as a messenger for the First National Bank. At a certain point every day I had a ninety-minute lapse between my runs and would set up and draw there. One day a cop sidled up to my chair and tapped it with a nightstick. As I looked up he said, “Pack your shit; move along.” I thought about saying something, but the way he was scanning the rest of the station, not even looking at me, let me know any attempt at conversation would not be a good idea. I grabbed my stuff and got around to remembering I had at least a gram of hash on me. I gave the cop a nod and he said: “Next time asshole? I’ll have you empty your pockets, see what we could see. Know what I’m sayin’?”

When I think of this place, I remember it in pieces—moments, fragments, half-remembered instances that comprise a puzzling portrait of our city and those who’ve chosen to, and not chosen to, watch over us.