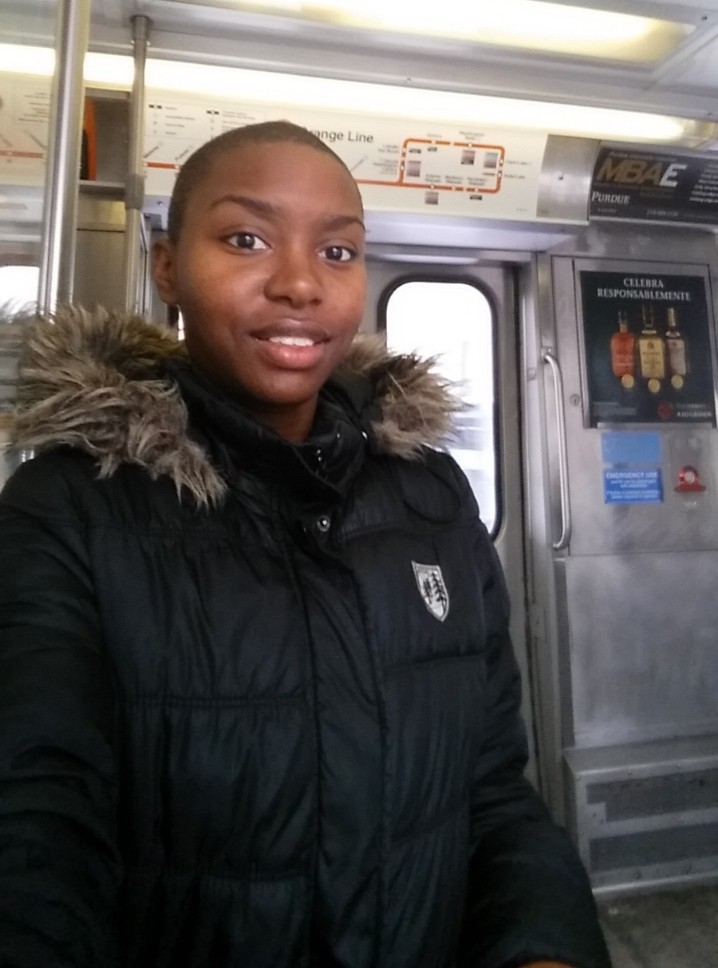 Courtney Cobbs on the Orange Line

Social worker and transit fan Courtney Cobbs moved to our city from Little Rock, Arkansas, in 2013, partly because she wanted to be able to live car-free. She has posted some thought-provoking comments on my transportation news website about the need for better bus and train access on Chicago’s South and West Sides. I caught up with her by phone to hear more of her take on the equity issue.

You wrote a while ago that Chicago’s transit system is one of the things that brought you here.
Yes. I wanted to live in a city where I didn’t have to own a car, because I really care about the environment, and public transportation saves you money. I really like big cities, and I felt like Chicago was an affordable option versus New York or L.A., and I could live here without a car relatively well.

Where do you work nowadays?
I work for Thresholds Psychiatric Rehabilitation Centers, at their Ravenswood location. I work with adults with chronic mental illness, helping them with daily living skills and integrating them into the community. For example, I help them navigate the CTA.

You live near the Bryn Mawr stop. How far a walk do you have to the train station?
Two or three minutes. It really just depends on if I get the walk signal or not. [Laughs.]

So you’re only about a block away. Is train noise an issue in your apartment?
It isn’t, surprisingly. If it’s late at night and I have my window open, occasionally I can hear “Doors closing,” but that’s about it.

Where did you live when you first came to Chicago?
I lived in Kenwood, at 44th and Drexel. Transit service wasn’t as good. The best part about living there was the #4 Cottage Grove bus. That runs along Cottage Grove between the Illinois Center and Chicago State University.

That was how you got downtown?
Yeah. When I started with Thresholds, I would take the 43rd Street bus to the 47th Street Red Line station. My commute was about an hour, hour and fifteen minutes every day, which was really physically draining. Moving to the North Side has cut down on my commute time considerably.

So what do you like about the CTA?
It’s pretty reliable compared to other systems. I was just in Atlanta this past weekend and I was like, oh gosh, I can’t wait to be back in Chicago because the CTA is so much better. The trains run more frequently here, and there’s more development around the stations. It’s not as if it’s an afterthought like, oh, we’re going to have a system for some people who don’t drive.

You’ve written that you feel there are some equity problems with the CTA. Do you want to tell me more about that?
Certainly. I’m not saying that the CTA’s trying to provide crappier service in some neighborhoods than others. There’s an urban design element at play. Some neighborhoods are better suited for transit. Other neighborhoods are built for cars, and that’s how people get around.

But in some neighborhoods, the service could be more frequent. For example, when I was taking the bus to and from the 47th Red Line stop, once I got back to that station in the evening, I would often have to wait fifteen or twenty minutes for a bus to take me to my apartment. There’s also a lot of crowding on some of the buses. The #4 can be really crowded with strollers and grocery carts. So more buses are needed to get people to the trains, because trains are more popular.

Because they’re faster and don’t get delayed by traffic jams?
Yes, which is why I support bus rapid transit. Ashland, and I think a lot of other streets, could be turned into BRT routes. Giving more buses traffic-signal priority and bus-only lanes is important, because it’s frustrating when buses get stuck in traffic, and you’re delayed by ten or fifteen minutes. There should also be bus-only lanes on Lake Shore Drive, in both directions.

What are some other equity issues with the CTA, besides infrequent service?
The times that buses stop running. For example, the #4 doesn’t go as far as 95th after a certain time of night. That puts a lot of people in jeopardy. I’ve actually had friends call me because they missed the last #4 bus and they needed a ride home.

That’s definitely more of a problem on the South Side and probably on the West Side. I recognize that not every neighborhood has the same transit access I have at my current apartment. The #36 [Broadway] bus, the #151 [Sheridan], the #147 [Outer Drive Express], the #84 [Peterson], the Red Line—they’re all right here.

If you had Forrest Claypool’s job as president of the CTA, what would you do to improve transit access for the South and West Sides?
Ask the people what they want. Have more focus groups. Survey the people who currently take the CTA. Survey people who used to take the CTA and no longer take it. Mail out surveys, email them, call people. Because I think a lot more people would use the service if it was better.