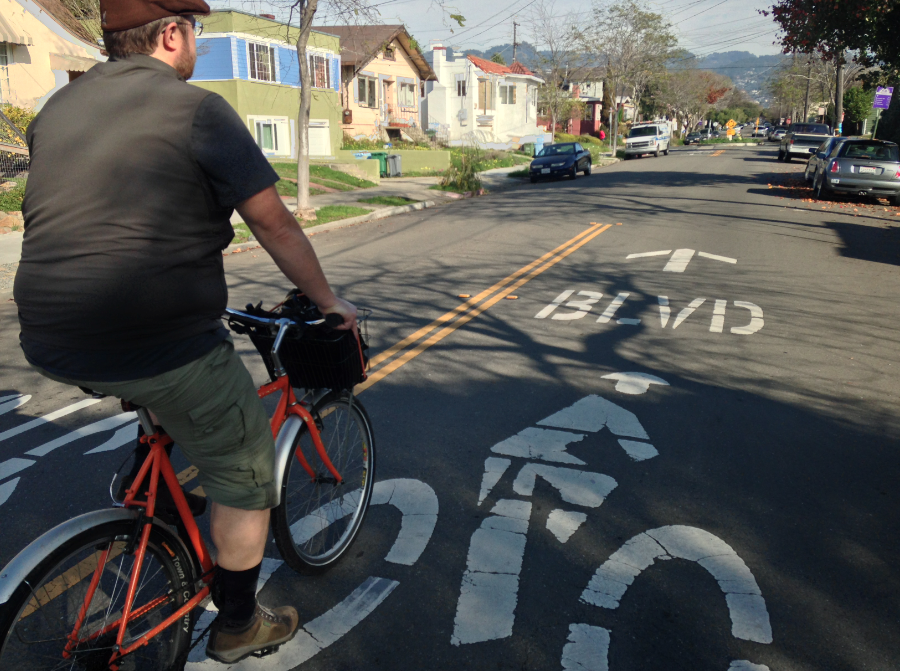 When I first visited the Bay Area nearly two decades ago for the 1996 Cycle Messenger World Championships, San Francisco’s vibrant bike culture struck me as a vision of what I wanted cycling in Chicago to be like. I was particularly inspired by the massive amount of two-wheeled traffic on Market Street, the Michigan Avenue of San Francisco, during the evening rush.

The cover of Chicago’s 2014 Bikeways Report, released last week, features a recent photo of a similarly dense throng of cyclists on Milwaukee Avenue. In a few respects our city has pedaled past SF in terms of bike-friendliness. For example, we now have far more bike-share vehicles and miles of protected bike lanes per capita.

It didn’t help San Francisco’s cause that a successful lawsuit spearheaded by a cranky dishwasher and blogger named Rob Anderson in 2005 put the brakes on bikeway construction for several years. His paradoxical argument was that the lanes were a potential threat to the environment. However the injunction was lifted in 2010 and, since then, the city has been working hard to rebuild its rep as a biking mecca.

On a trip to Northern California last month, I mixed business with pleasure by checking in with a couple of colleagues for an update on the Bay Area’s bike progress. My first stop was Berkeley, the East Bay college town where my old pal Eric Anderson now works as the bike and pedestrian coordinator. Known as “Big Horn,” for the giant antique bulb horn on his basket bike, he was a founding father of the Windy City’s Critical Mass. He also recommended me for my first urban-planning job, to be his replacement as the city of Chicago’s bike-rack czar back in 2001.

On this visit, Eric took me on a bike tour to check out some of the facilities he’d helped make a reality, many of which I’d love to see implemented in Chicago. We started with a spin on the West Side Pathway, a former Santa Fe Railroad rail line that has been converted into a multiuse path. “For the newer part of the trail, we did an analysis of each street crossing and determined, based on the number of people walking, biking and driving, which was the dominant route—the street or the path,” Eric says. “That’s basic traffic engineering.”

At intersections where the trail has more traffic, drivers get a yield sign. At other crossings, path users get a stop sign, but there’s also a button to push that activates flashing lights to let motorists know you’re about to cross the street. A system like this at street crossings along Chicago’s Lakefront Trail could surely help prevent crashes.

One of the best things about biking in Berkeley is the preponderance of bike boulevards. These are traffic-calmed residential streets that give priority to cyclists. In Chicago, these are known as neighborhood greenways, and watered-down versions have been installed on Berteau Avenue in Ravenswood and Wood Street in Wicker Park, featuring curb bumpouts, traffic circles, contraflow bike lanes and/or green paint.

The big difference between these and the Berkeley facilities is the use of traffic diverters: curbs that force drivers to turn off of the street at various points, but have cutouts that allow cyclists to proceed. This eliminates the temptation for motorists to use side streets as an alternative to arterials. When I mention to Eric that one of my hosts complained that the diverters are confusing for drivers, he replies, “I’d rather hear drivers complain about diverters than read about bike crashes in the newspaper.” 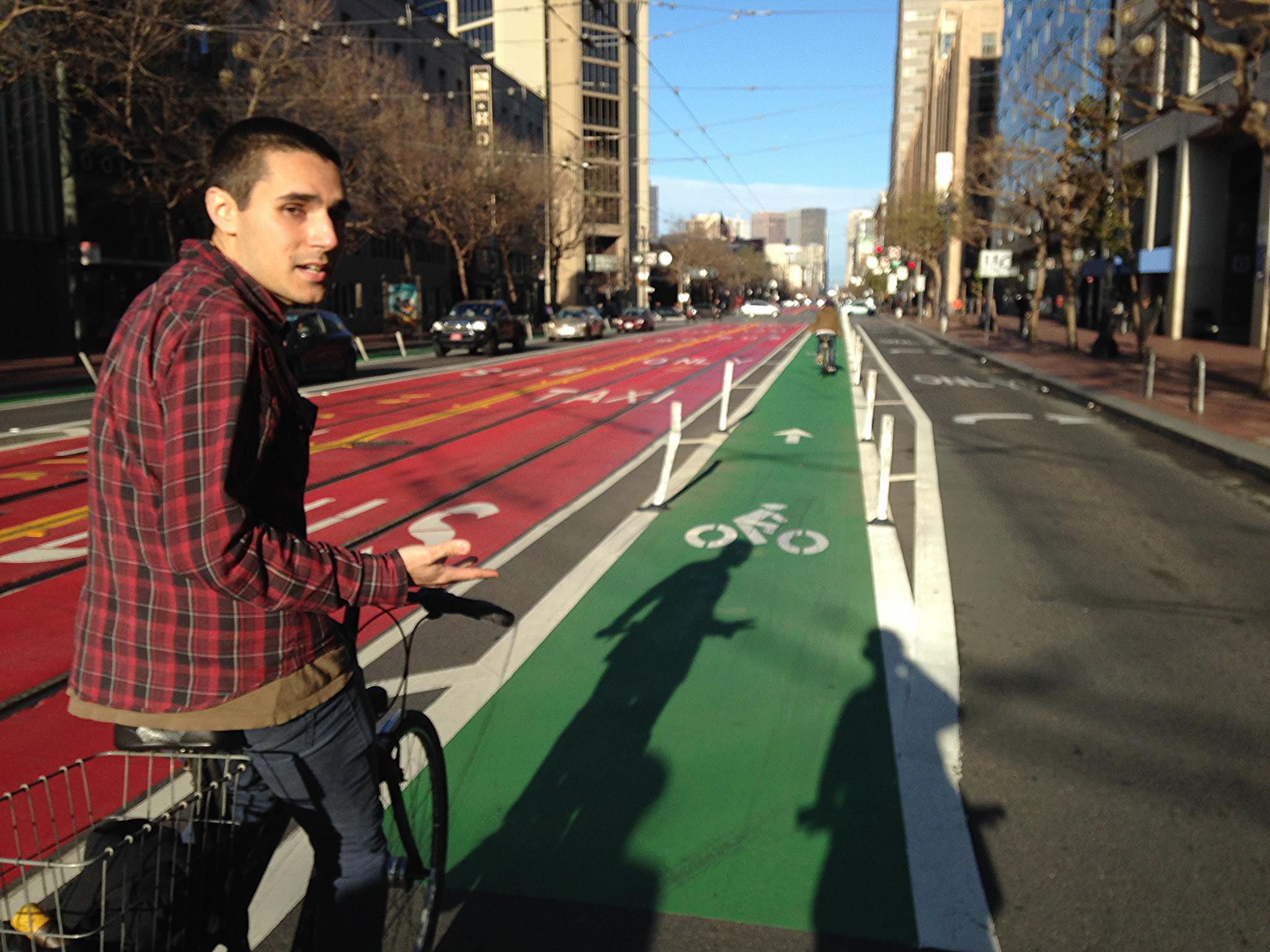 The next day, I meet up with Aaron Bialick, the San Francisco editor for the transportation news website network I write for, for a pedal around bikeways on the peninsula. We start in Golden Gate Park, a big, gorgeous green space on the west side of town, then pedal over to nearby Masonic Avenue, a broad six-lane street with a high crash rate, which is slated for a dramatic safety overhaul.

Two of the travel lanes and 167 car parking spaces will be converted into the city’s first raised bike lanes, plus a tree-filled median. Predictably, there was bitter resistance to the plan from some neighbors. However, heavy outreach by the city, the San Francisco Bike Coalition, and the North Panhandle Neighborhood Association convinced a majority of residents that the safety benefits more than justify the reconfiguration.

Next we get on the Wiggle, a popular zigzagging onstreet bike route that leads from Market Street to Golden Gate Park, allowing cyclists to avoid some of the city’s notoriously steep street grades. The streets along the route are currently marked with bike symbols and chevrons on top of green squares, and upgrades are planned for the future. “Are we on the Wiggle?” I ask Aaron shortly after we get on the route. “Yes, we’re Wiggling,” he says.

We end up on Market, which is now even more impressive than I remembered it. While bike traffic isn’t at its peak on this Sunday afternoon, two of the six travel lanes have been painted solid green for wide bike lanes, and another two have been painted solid red as dedicated bus and taxi lanes. This setup makes sense, since up to seventy-five percent of weekday vehicle traffic on the street is bicycles. Imagine how much safer, more efficient, and more vibrant Michigan Avenue would be with a similar street remix.