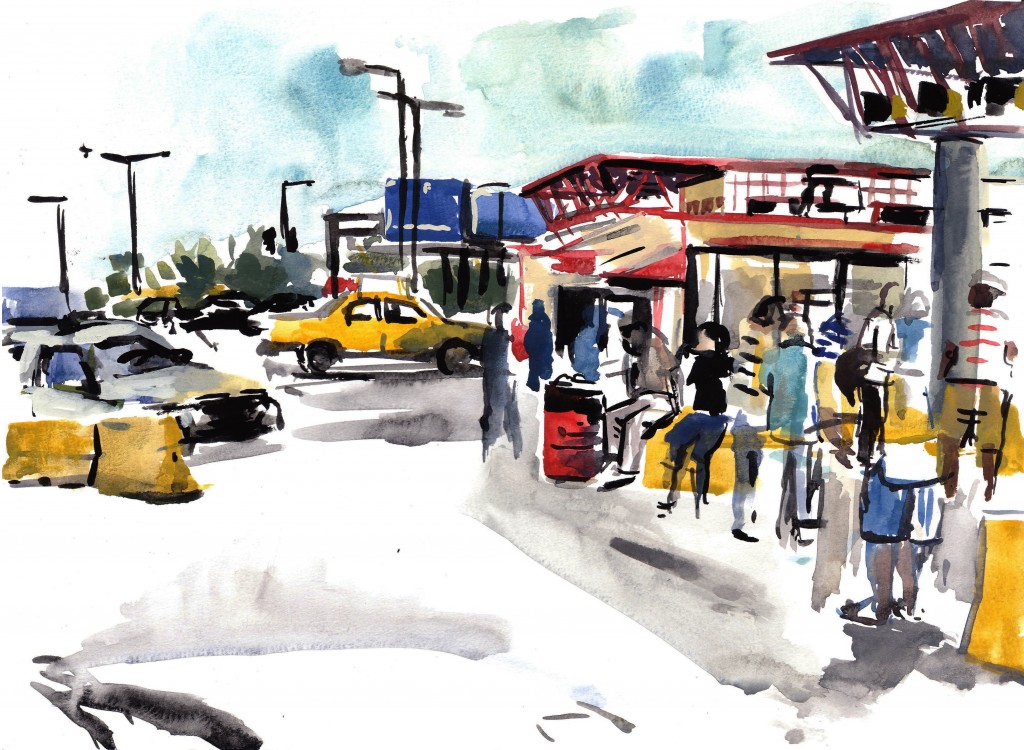 In 2003 the Public Chauffeur Training Institute was located at Harold Washington College on Lake Street downtown. This was the place you had to go if you wanted to become a taxi or limo driver in the city of Chicago. I was returning to the job after six years of delivery driving, waiting tables, bartending and a few other service-industry gigs—none of which seemed to suit me financially, temperamentally, or in any other way. While I wasn’t a newly arrived immigrant to this city and country like the majority of my classmates, I still hadn’t quite found my place here even twenty-five years after my arrival from the Soviet Union. Cab-driving in America is primarily an immigrant’s job and has been so since sometime in the 1980s when cab companies decided to change from commissioned drivers to leasing. When there were no longer benefits and the entire burden of making a profit was put on the driver, the majority of Americans began to look for employment elsewhere. Few but the most desperate stuck around. It just wasn’t worth the risk.

My classmates came from Kenya, Nigeria, Korea, Yugoslavia, Pakistan, Ghana, India and a couple countries I’m probably forgetting. Almost everyone was a teacher, engineer, lawyer or other professional back in their home country. Each was here as a stop-gap until something in their field turned up. Not a single one of us wanted to be a cab driver for any significant length of time. At least that’s what we all confidently told one another in the first class. Our teacher, a retired driver, wanted us to tell what we knew of each other’s cultures. When we went around the room introducing ourselves, racial and ethnic prejudices were given full voice. It was mostly for laughs and to break the ice but it was quite clear that few of us knew much about other tribes and what little we did know wasn’t flattering. The Africans were likely cannibals, the Southeast Asians all smelled and I—as the lone Jew of the bunch—undoubtedly owned a bank and was just slumming it. We all laughed and reassured one another that here in America we were all after the same thing.

One of the refrains of the two-week course was about how in Chicago cab drivers were “Ambassadors to the City.” It was our job to present our town to visitors in the best possible light. According to the handout we were made to repeat out loud in unison over and over, we were to be some combination of tour guide and civic booster to each and every passenger getting into our cab at O’Hare, Midway or Union Station. What did any of us actually know about this city aside from being from elsewhere and finding ourselves here in need of some way to get by? That would remain to be seen.

Over the nine years that I drove, I rarely ran into my classmates. Most don’t stick with it very long. The two-week class hardly prepares you for the actual job. It takes months to even begin to make sense of it, let alone earn any money at it. When we would run into each other, though, there might be a slight nod, a half smile, but not much more. It’s a solitary thing, driving a cab and each of us was in it to get elsewhere as fast as we could. To talk to each other would be to acknowledge that we had stuck around longer than we had intended; it was more or less to acknowledge our failure to find any better way to make a living.

At the airports, cabstands and all-night restaurants where cab drivers congregated, most typically stuck to their own kind. Pakistanis might break bread with Indians but would do so less often with Eastern Europeans or Africans, and the same would hold true for most races and ethnicities. The American melting pot had not had its way with this bunch quite yet. Every so often there were exceptions. Differently colored and clothed men could sometimes be seen strolling together up and down the rows of taxis at the O’Hare Staging Area. The African food truck parked by the cabstand at the Sheraton boasted customers from every continent. The managers and other employees at the garage—often former drivers—hailed from every country imaginable.

The Public Chauffeur Training Institute moved to Olive-Harvey College on the far South Side a few years back, but I have no doubt that at the beginning of every new course the students break the ice more or less like mine did in 2003. They’ll joke about where they’re from and promise one another that they’ll only drive for a year or two until something better comes along. They’ll learn the city and share it with their passengers the best they can. Each will represent Chicago as a mixture of where they came from and where they’d like to go; every tick of the taxi meter taking them a little closer to their next destination, wherever that may be.