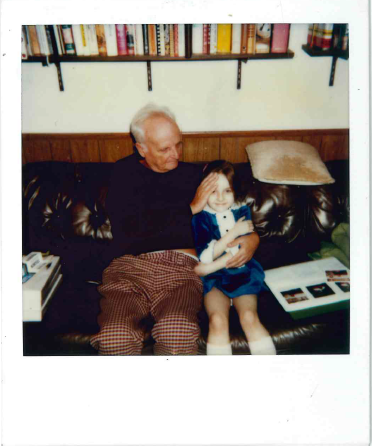 A young author with her grandfather, who escaped earlier than her father and would occasionally pass through Chicago.

Let’s say that, like so many, you were born outside the borders of your own country. Or more specifically, you were born in Chicago in the middle of your father’s fifty-year exile from his country. Say you’re one of those children of the “Fifty-Sixers,” the student revolutionaries who, after their rebellion was crushed (think Tiananmen Square, but with more statues of Lenin) ran across Hungary’s borders and wound up months later, wearing refugee clothes, in Chicago, Cleveland, New York. The Fifty-Sixers were young—young enough to learn solid English, to make careers here, to have children here. Young enough when they arrived that most didn’t head back after the Iron Curtain lifted. A few, like your father, are returning home only now.

If your family were French, or Russian, or Mexican, you’d grow up with at least a filmic impression of that place. But there are no movies, no children’s books set there, no restaurants full of Hungarian food. Just the occasional Olympic swim team. (Technically you’re Transylvanian—from the part of Hungary that’s now trapped inside Romania—but you know that what you hear about that place is the cartoon version.) Your father won’t bother teaching you the difficult and kinless language, because he doubts you or he will ever have the chance to return to the only place in the world where it’s spoken. Your knowledge of Hungary is entirely limited to the parts of it that pass through Chicago. Fortunately, a lot of it passes through Chicago.

Here’s how it usually happens: Someone has gotten out. They’ve obtained a travel visa with no intention of returning, or they’ve bribed someone, or they have, like your father, run over mine-laden farmlands in the middle of the night. They land in Chicago. It’s 1982 or 1983 or 1985. And because you aren’t in school that day, you’re the one to ride with your father to O’Hare, to wait in the United terminal as the refugee steps off the plane, blinking and delirious. If it’s 1987, you are thrilled to meet an adult who finds the new neon light tunnel from the C gates as amazing as you do, even if you and this quavering old man cannot understand each other in the slightest.

The refugee is astounded by your father’s Volkswagen, which has air conditioning. But you’re still just on I-90. When the city itself comes into view—maybe the refugee got a good look from the plane, or maybe it was a cloudy day—you see it with his eyes. It’s Xanadu. It’s Olympus. It’s the Emerald City.

Your father has plans. First: the observation deck of the Sears Tower. In retrospect, you’ll wonder why more of these refugees didn’t have heart attacks. Then Lake Shore Drive. Then up to the suburbs, where this man will spend a week or a month or a year living in your basement. On the way, your father makes sure to swing up Sheridan Road to show off those mansions with gates, the apex of capitalism. If it’s a nice day, you’ll go to the beach. But these people have seen lakes before. Hungary has a beautiful one.

Here’s what they haven’t seen: the produce section at Jewel. Which is why your father has saved it for the end of the tour. The Sears Tower might have been impressive, but this—this—is the culmination. One married couple can’t believe it’s real, thinks it’s somehow been set up for their benefit, a Potemkin village of fruit. And although it’s a produce section that would send a 2015 Chicagoan running for the farmer’s market, even now you can see it as a spectacular thing. Mountains of lettuce, bananas not yet yellow, barrels of apples in five different colors. Strange, ugly things called avocados. Welcome to America.

Because enough of these people wind up in Chicago—thanks to your father and other helpful hosts—you grow up with pockets of Hungary all around you. There’s the food: sweet noodles, goulashes to feed an army, plums wrapped in dough and boiled, salamis and sour cherry soup and salted duck fat spread on toast. When your father’s cousin gets out, his wife sets up a ballet studio where the rigor of her classical-Communist training gives you, if not a lot of grace, at least good posture for life. (When your own daughters are old enough to start dance you’ll try the watered-down version at the rec center, then quickly grand jeté them back to her studio.) And there’s the music; you’ve grown up in a Chicago over which Georg Solti presides like court composer, a Chicago with Bartók concerts sponsored by various Hungarian cultural groups. And you’ve grown up in a house with whole shelves of albums from expatriate musicians, ones who ran through the hills with cellos.

You’ve grown up with a Hungarian sheepdog, a puli named Pogácsa (after the addictive biscuits invariably set out as appetizers for guests) who is, like you, out of touch with his roots except in the few ways they manifest: his appearance, his instincts. When your parents have parties, he circles and bumps the guests until they’re clustered into small groups. He is treating them, though he doesn’t know it, like Hungarian sheep.

The night before your wedding, your father asks you—and for some reason, it seems a totally logical time to ask you this—if you consider yourself American. You answer yes, not because you feel like a baseball-loving Daughter of the American Revolution, but because to you, this is what it means to be American: to be both from here and from away, to belong also to a land you’ve never known, to look with perpetual wonder at the lemons in the grocery store. You are a daughter of a different revolution.