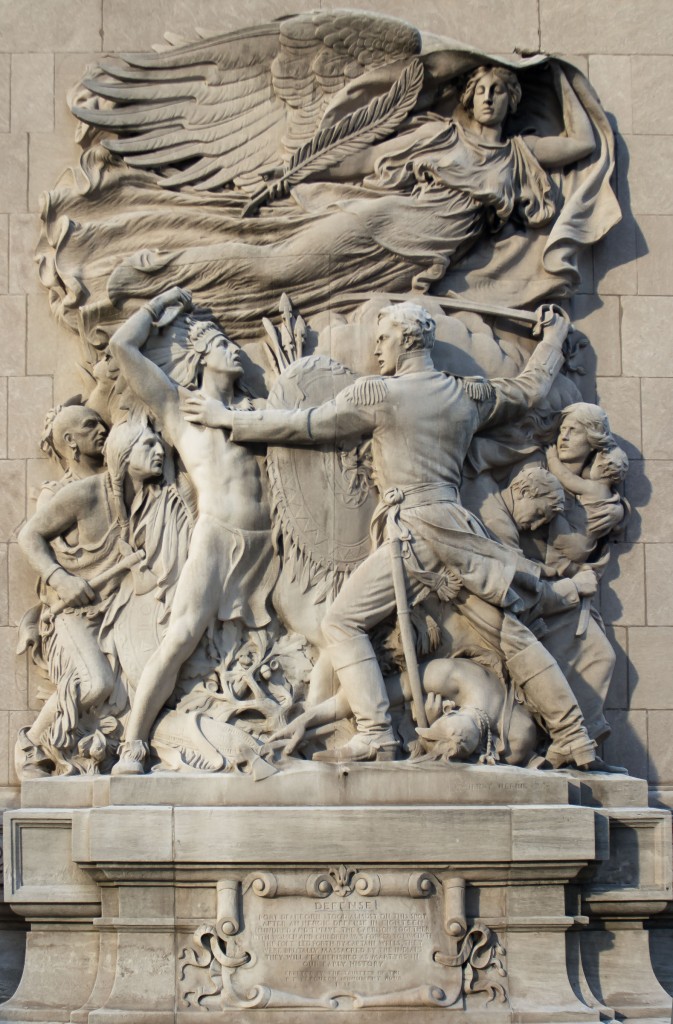 Even when Chicago was “Chekagou, ” this locale at the southwest edge of the Great Lakes was part of a system of globalization.

The first non-indigenous people to pass through this area—so far as we know—were Frenchmen Joliet and Marquette, the entrepreneur looking to make money and the priest hoping to save souls, who wintered at the Chekagou portage in 1672-73. They sought a water route to China, to expand French trade worldwide, and to evangelize for Catholicism.

As these two Frenchmen travelled with Native Americans, they saw that Chicago was an ideal spot for a canal to connect the North Atlantic/Great Lakes trading system with the Mississippi River, which they thought emptied into the Pacific. That this vast expanse of land and waters included scores of tribes and different indigenous cultures was not of much concern to them.

A century or so later, Jean Baptiste Point du Sable established his trading post near the mouth of the Chicago River. But du Sable and his successor, John Kinzie, were not just colonizers in a crude sense. As Ann Durkin Keating shows masterfully in her book “Rising Up From Indian Country,” they were part of a sophisticated network of global trade between European-Americans, Native Americans and Europeans. A multilingual and mixed-race métis economic culture thrived in the Great Lakes region before and after the War of 1812, based on elaborate systems of personal relationships, credit, bookkeeping and the delivery and exchange of goods. Manufactured items from Europe and the East Coast flowed into the Middle Border, and raw materials supplied by Native Americans, like beaver pelts, adorned the fashionable in European capitals.

Native tribes were “removed” from the area in 1835, following cash payment from the Federal Government in the 1833 Treaty of Chicago. That local merchants managed to cheat the natives out of much of their money should come as no surprise.

Today, according to the 2010 census, about 27,000 Native Alaskans and American Indians, of numerous tribes, call Chicago home (out of a total urban population of 2.7 million). Like other immigrants to Chicago from America’s rural hinterlands, many came here seeking economic opportunities, and faced discrimination, poverty and marginal living conditions. The American Indian Center in Uptown has served this contemporary Indian community in Chicago since 1953, providing both cultural programming and social services. Chicago is also home to the American Indian Association of Illinois, in West Ridge.

Compared to other distinct ethnic and racial groups, Native Americans are few and far between on Chicago’s twenty-first century streets. Yet a symbolic Native American presence lingers throughout the city.

From Ivan Mestrovic’s monumental “The Bowman” and “The Spearman” at the intersection of Congress and Michigan, to “Portage,” by Sioux sculptor Ted Sitting Crow Garner, outside the Six Corners Sears store on the Northwest Side, artistic images of Native Americans appear throughout Chicago. Some are pure commerce—the stray “cigar store Indian,” Art Deco terra cotta storefronts, or the exterior and lobby of the Marquette Building in the Loop.

Most of these representations—especially the older ones—are in the Romantic tradition, as Europeans either idealized Indians as noble savages, or demonized them as brutal savages.

This aesthetic/ideological dynamic appears with special drama on the Michigan Avenue Bridge, mere steps from where Du Sable’s trading post and Fort Dearborn initiated the colonial settlement of the strategic swamp that would become our city.

On the northeast Bridgehouse, James Earle Fraser’s “The Discoverers” depicts natives peacefully guiding white explorers. The profile of one of the guides should be familiar, as it is identical to the one Fraser used on the Indian Head nickel he designed for the United States Mint. The southwest Bridgehouse features “The Defense,” by Henry Hering, which inaccurately depicts the bloody Fort Dearborn Massacre of August 1812. (As historians and rhetoricians note: in wartime, when whites win, it’s a Battle; when natives win, it’s a Massacre.)

Beyond these works of art, Native Americans haunt Chicago, mostly in the names of streets, parks and neighborhoods.

On the Far North Side, Indian Boundary Park, and the oddly angled street of Rogers (running northeast to southwest from the Lake to Touhy), recall the beginnings of white dominance of Chicago. In the 1816 Treaty of St. Louis, local tribes ceded land on either side of the Chicago River to the Illinois River (already, the government was planning that canal).  Irish immigrant Phillip Rogers soon settled along this boundary, and today the Chicago Park District’s Pottawattomie Park, named for one of the soon-to-be-displaced tribes, abuts it.

Elsewhere on the North Side, the neighborhood of Sauganash includes the Billy Caldwell Woods Forest Preserve. These two names refer to one man, son of an English soldier and a native mother, central to the early history of Chicago, an exemplar of the métis culture Keating and other historians have explored.

In the northern suburbs, Half Day Road is named not for the amount of time it takes to get there from downtown (despite how it sometimes seems on the Edens). This road memorializes Aptakisic, a Potawatomi Chief famed for his oratory, who led farmers to safety at Fort Dearborn during the Black Hawk era, and who was known in English as Half Day. One of the first towns in Lake County was named for him as well, and like Billy Caldwell/Sauganash, the Half Day/Aptakisic names linger in our landscape in both his native tongue and English.

This dual memory characterizes how Indians haunt our modern city.

In 1951, Nelson Algren wrote in “Chicago: City on the Make” that “The Pottawatomies were much too square. They left nothing behind but their dirty river.”

Beyond the physical reality of native people in 2015, their textual presence endures to remind us of the past. European-American Chicagoans displaced the original inhabitants of Chekagou, but their names and histories yet remain written into the cityscape of Chicago.