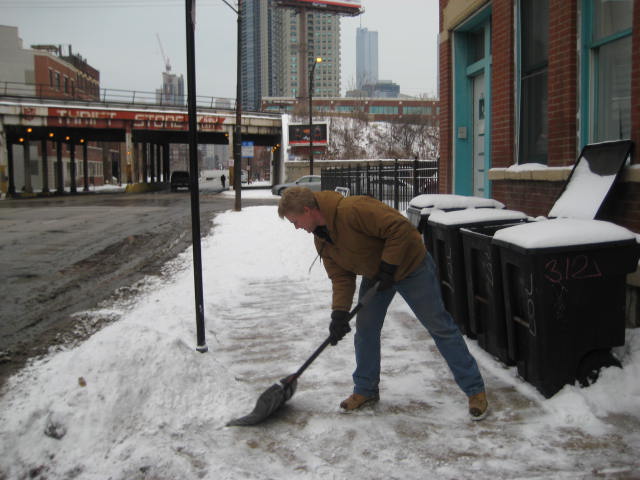 After Mother Nature dumped 19.3 inches of snow on us earlier this month, many viewed Chicago as a post-apocalyptic hellscape, but I felt the city became something of a utopia. Drivers were forced to slow down to sensible speeds, and folks helped out neighbors and strangers in numerous ways. The main sour note was the reappearance of “dibs,” the selfish practice of reserving dug-out parking spaces with old junk.

The day after the blizzard, I found cross-country skiing to be the most efficient way to get around. As I shushed down the middle of unplowed side streets from my home to the library to band practice and back, I encountered five different stuck motorists. Helping them push their marooned automobiles out of the snow’s clutches gave me a warm feeling inside.

However, not everyone can strap on a pair of skis to avoid trudging through the white stuff on uncleared sidewalks. When property owners neglect their civic duty by failing to shovel in a timely manner, it creates a significant barrier for people with disabilities, seniors and young kids, and a major annoyance for the rest of us.

Active Transportation Alliance director Ron Burke pointed out in a recent blog post that heavy snowfalls make it obvious most cities prioritize driving over walking and biking. Ever since Mayor Michael Bilandic lost reelection in the wake of a 1979 blizzard that paralyzed Chicago, local mayors have generally done a bang-up job of getting the streets plowed for drivers.

However, even in the Loop—where there are a heckuva lot more people on foot than in cars—the streets are usually cleared well before the sidewalks, Burke noted. And don’t get me started on Chicago’s protected bike lanes, which are often clogged with slush for days after a big storm. This isn’t always the city’s fault—even after the city has plowed curbside PBLs, it’s common for building crews to push snow from the sidewalks into the lanes.

Since walkways in front of homes and businesses are public space, just like streets are, it’s logical that municipalities should take responsibility for clearing them. Some of Chicago’s tonier suburbs, such as Glencoe, Winnetka and Wilmette, do just that, the Tribune recently reported.

In the city of Chicago, we rely on building owners and merchants to do the right thing, but too often they don’t. It’s particularly infuriating to encounter parking lots, strip malls and big-box stores where the management has plowed the car parking spots, but hasn’t bothered to shovel the sidewalks around the perimeter of the property.

At a meeting of the Mayor’s Pedestrian Advisory Council a few days after the recent snow accumulation, Chicago pedestrian coordinator Suzanne Carlson reported on the city’s strategies to coax people into picking up a shovel or snow blower. According to the municipal code, if a storm ends before 4pm on any day but Sunday, you have three hours to clear the snow, she noted. If it ceases after 4pm, or on the Lord’s Day, you have until 10am the following morning.

The Chicago Department of Transportation has posted ads on bus shelters and billboards exhorting “Keep your sidewalks shoveled. It’s neighborly… and it’s the law.” Residents are advised to call 311 if they need help with clearing snow due to age or disability.

To that end, CDOT has established a roster of hardworking volunteers called Snow Corps—not to be confused with SnoCore, the annual festival of alternative and metal bands that tours mountain resort towns. If you contact Snow Corps, Blink-182 (currently fronted by ex-Chicago bike messenger Matt Skiba) will not show up at your doorstep with shovels in hand.

As an incentive for businesses and organizations to do an outstanding job of keeping their walkways free of snow and ice, the city and MPAC have established the “Winter Wonder” awards, advertised by a poster featuring a shovel with the Chicago flag emblazoned on it. Call (312)744-5819 or visit tinyurl.com/CDOTWinterWonder to nominate your favorite establishment. Top nominees will receive a certificate of appreciation from the advisory council.

Carrots are great, but what about sticks? According to the city ordinance, individuals who don’t shovel can receive $50 tickets, and businesses can be fined a grand. At the meeting, CDOT Commissioner Rebekah Scheinfeld said the city has sent out inspectors who have issued warnings to scofflaws, with an emphasis on multiunit buildings and large businesses.

However, actual tickets for noncompliance have been relatively rare this year. While the city issued more than 400 citations during last year’s brutal Chiberia winter, only forty-seven tickets were written this season prior to the recent whiteout, CDOT staffer Eric Hanss reported.

“Our emphasis, especially considering how much snow came down so quickly, has been on warning and education and repeat follow-ups,” Scheinfeld explained. “The attempt is not to divide people.”

Contrast this approach with that of our neighbor to the north. Evanston, with 1/36th the population of Chicago, issued warning notices to fifty property owners who hadn’t shoveled after this month’s blizzard, then ticketed those who still weren’t in compliance twenty-four hours later, the Trib reported. Next, the city of Evanston had contractors clear the sidewalks, and billed the property owners at an average cost of $190 a pop.