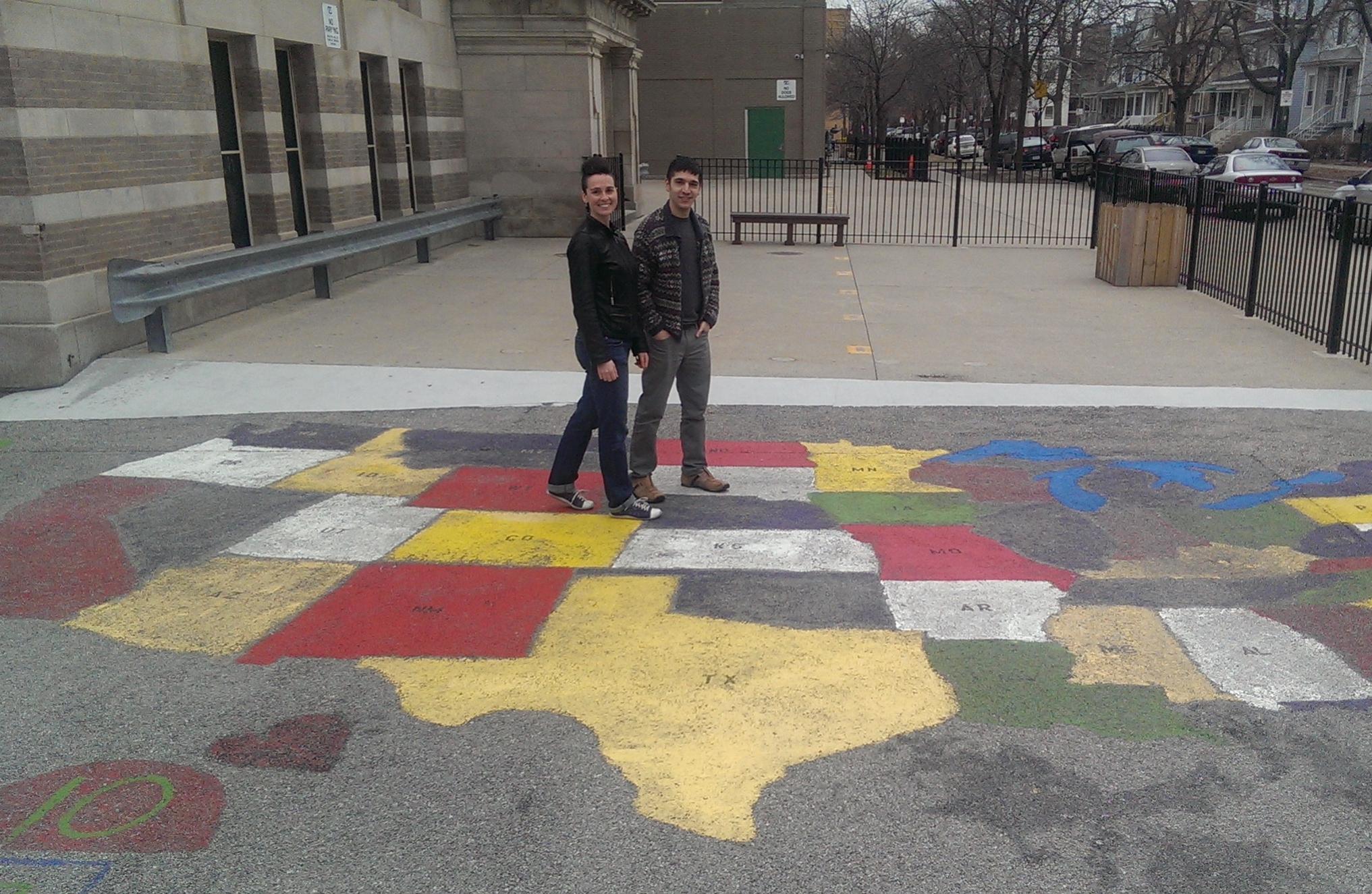 As someone who’s pedaled three sides of the Continental United States, I can tell you that traveling cross-country by human power is an amazing way to see this great land of ours. You experience the geography and the people in a totally different manner than you would rushing by at eighty miles per hour.

Two young Chicago urban planners will soon be traveling coast-to-coast in an even more intimate way than I did. This April, Rebecca Geissler and Tim Garibay, both twenty-seven, will embark on an epic walking trip from the Golden Gate Bridge to Coney Island. They expect that, hiking about thirty miles a day, they’ll complete the roughly 3,300-mile pilgrimage in four or five months.

“I’ve secretly always wanted to run away from home,” she explains. “Not in a negative sense, but I think it’s going to be very liberating to drop everything and go out and see what happens.”

Geissler and Garibay, who’ve been dating for about three years and live together in Bucktown, both play important roles in helping Chicagoans get around the city car-free. She works as a bus-scheduling analyst for the CTA, coordinating extra service for special events like ballgames and large festivals.

Garibay is a consultant to the Chicago Department of Transportation, helping determine Divvy bike-share station locations. He was involved in siting the first 300 stations, as well as the next 175–the final locations will be announced in March or April.

The idea for the transcontinental trip hatched in January of last year when Garibay posted a link to a list of people who have walked across the country on Facebook, vowing, “I’ll be on this list one day.” Since then, the couple has charted out a route that connects San Francisco, Salt Lake City, Denver, Omaha, Chicago, Pittsburgh, Philly and New York. “I grew up in the flat Midwest, so I’m really looking forward to the scenery, especially from the Pacific to Colorado,” he says.

But why are they quitting good jobs to do this right now? “We’re young and healthy,” Geissler says. “Who knows if we’ll be able to do this when we’re forty or fifty? Also, we’re just getting started in our careers. It’s not as if I’m going to miss out on a chance to replace Forrest Claypool as head of the CTA.”

Although handcarts have become popular with long-distance walkers, the pair will be carrying their gear in backpacks. “It seems easier to me, although I’m sure that once we’re halfway through the trip I’ll change my mind,” Geissler jokes. They’ll mostly be “wild camping” in unsanctioned sites, since this low-mileage form of travel doesn’t afford the luxury of zooming to the nearest KOA each night.

Likewise, two 100-mile-plus gaps between towns in the Nevada desert, on a section of U.S. 50 nicknamed “The Loneliest Road in America,” pose a logistical challenge. To transport the large quantity of water they’ll need, they plan on buying baby carriages at thrift stores and then donating them after they leave the wilderness.

The Rockies, of course, form another major hurdle. They’ll be crossing the Continental Divide at Rabbit Ears Pass in Northern Colorado, elevation 9426 feet.

I warned them about the grinding boredom they’ll surely experience while crossing Nebraska on U.S. 30, which parallels the depressingly shallow Platte River and connects grim, interchangeable farm towns at regular intervals. I suffered an existential meltdown on that road during a 5,500-mile bike trip from Astoria, Oregon, to Portland, Maine. On the other hand, they’ll be crossing Nebraska in the springtime. When I did it in the dead of summer, the temperature hovered around ninety-five degrees.

To prepare for their odyssey, they’ve done a number of long-distance hikes in our region. They trudged eleven miles from Bucktown to Skokie through deep snow to redeem a gift certificate for, perversely, ice cream. They strolled the length of Western Avenue in Chicago, one of the world’s longest urban roads at 23.5 miles.

Geissler and Garibay hiked from their house to his hometown of Griffith, Indiana, to surprise his grandmother on her birthday. “That was forty miles in August with no sunscreen,” he recalls. “Not recommended.” And they trekked fifty-two miles from Bucktown to Kenosha, Wisconsin, last April. You can read about these trips on their blog WalkAcrossTheUSA.Wordpress.com

Shockingly, they completed the latter trip in a single day, which sounds like a death march to me. I walked about 100 miles from downtown Milwaukee to the Loop once for a Newcity cover story, but I did it over four days, and by the time I reached the Exchequer Pub, blisters covered my feet.

I asked the couple if they’d considered the impact of this potentially stressful journey on their relationship. After all, a girlfriend and I split up shortly after an unforgettable, but conflict-filled, bike trip from St. Augustine, Florida, to L.A.

“A lot of people think we’re going to get married afterwards,” Garibay says. “We’ve decided that, even if we break up halfway through, we’re both going to finish the walk, and we’ll have to finish it together. We’ve only got one tent.”