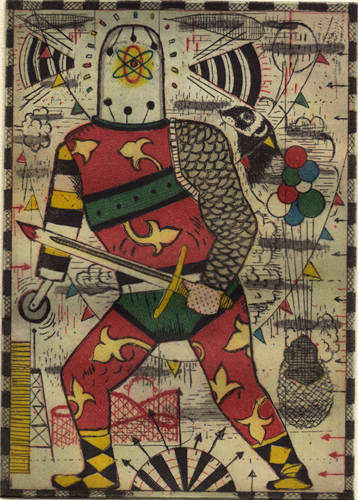 A funny thing happened on the way to the coronation of Rahm. People started to remember their street not being plowed, the furious murder rate, the shuttering of schools and the indifference signaled to our poorest citizens. Yep they remembered. Unlike four years ago, Rahm now had a record to run on and a great many people find this record wanting. Good on you Chicago.

Jesus “Chuy” Garcia is woefully underfunded he does not have one-tenth of what Rahm has; but with a lot of help from Bob Fioretti and Willie Wilson, he had enough to force this race into a runoff.

Mark my words Garcia is infinitely more likable than Rahm—he doesn’t carry himself like a smug, condescending automaton. There is a real human being in there who, four years after becoming a citizen, ran for office because he believed freedom demanded participation. He came in with Harold Washington and for a time helped change the way people thought about Chicago politics. Even with the seventies porn-‘stache, Chuy is capable of a genuine smile that isn’t just politics.

If it seems like I’m cheerleading for Chuy, it is because I am. I like him. He reminds me of the kind of guy we used to elect; people who were not media stars or personalities, but public servants. Even here in Chicago we managed to elect some who weren’t crooks. Chuy reminds you of a neighbor. He doesn’t lord over his constituency like the high-school principal.

When Rahm was first elected, I didn’t know what to think. He was smart—and yes, probably the smartest guy who has ever occupied the fifth floor—his bona fides as a national figure were all there, even if he was and is one of the most polarizing figures in American politics. He was the blow-dried, perfectly tailored, imperious smartest guy in the room. So naturally I couldn’t stand the guy: he reminded me of every Wall Street weasel who fucked this country up, down, sideways and from behind in the crash of 2008. In fact, it’s never been adequately explained just what Rahm Emanuel’s job was at Freddie Mac and just how much his government connections were leveraged in currying favor with private sector clients.

In short, he is not my kind of guy. Still, he was elected, he promised to bring jobs and industry to Chicago—I thought, give the guy a chance. He might be a different mayor than he was a Washington creature.

Rahm campaigned like the Energizer Bunny up on El platforms, smiling, shaking hands and exhibiting, for the first time I can remember, what politicians refer to as “The Common Touch” (you wonder why I hate politicians). It seemed Rahm had a regular Joe side we’d not been privy to before. And after running against Moe, Larry and Curly—he won big.

For his first 100 days he worked like a sled-dog chopping fat from City  Hall—morning, noon and night, there was Rahm at work. To his credit, there is nothing lazy about Emanuel.

The first inkling of what the new mayor would be like came when I watched him deal with the press. He would be in turns curt, smug, condescending and imperious. He acted as if they were having an audience with him. And the press, unfortunately, took his bullshit. At any moment, one of them could have raised a hand and reminded Rahm that he was a public servant, that, in fact, he works  FOR US. When we ask him a question, we are talking to our employee—and we have every right to ask him questions.

He was back to being exactly who I expected.

It’s four years later: the murder rate is still out of control, we need more police, better educational opportunities for every zip code, more jobs and less idiotic ideas like the “Star Wars” Museum or a stadium for DePaul on the lakefront.

We’ve had four years of Rahm: the G-8 conference, which cost the city in excess of seventeen million for extra cops—all decked out in turtle armor—and for four days our city felt like an occupied territory and not America.

In the meantime there are cameras everywhere, rumors and news stories of “black sites” where people are allegedly detained and tortured, things one thinks of happening under  totalitarian regimes.

If these allegations are true, I cannot imagine it happening without the mayor’s knowledge, and if he didn’t know, this might even be worse. The police are denying it and so far the only coverage of it has been online, so who knows? If the “black sites” are a hoax, the mayor should address it and promise us that this will not be allowed in Chicago. You know that when the Chicago police fall all over themselves denying something, it’s probably true.

I know that four years ago this was a livable, less angry place.

I also know that Rahm had a war-chest of campaign funds of about thirty million. and I know now the Rahm people will take the gloves off and sharpen their knives and politically try to carve more holes in Chuy Garcia than he can bleed out of.

Garcia is an underdog: the more I see of his campaign, the more quixotic it looks. I love an underdog. I love a guy who wades into the fray knowing he’s outmatched and outspent, but he hangs in there anyway because he is armed with his principles and the core belief of the American promise.

Mayor Chuy? Why not?