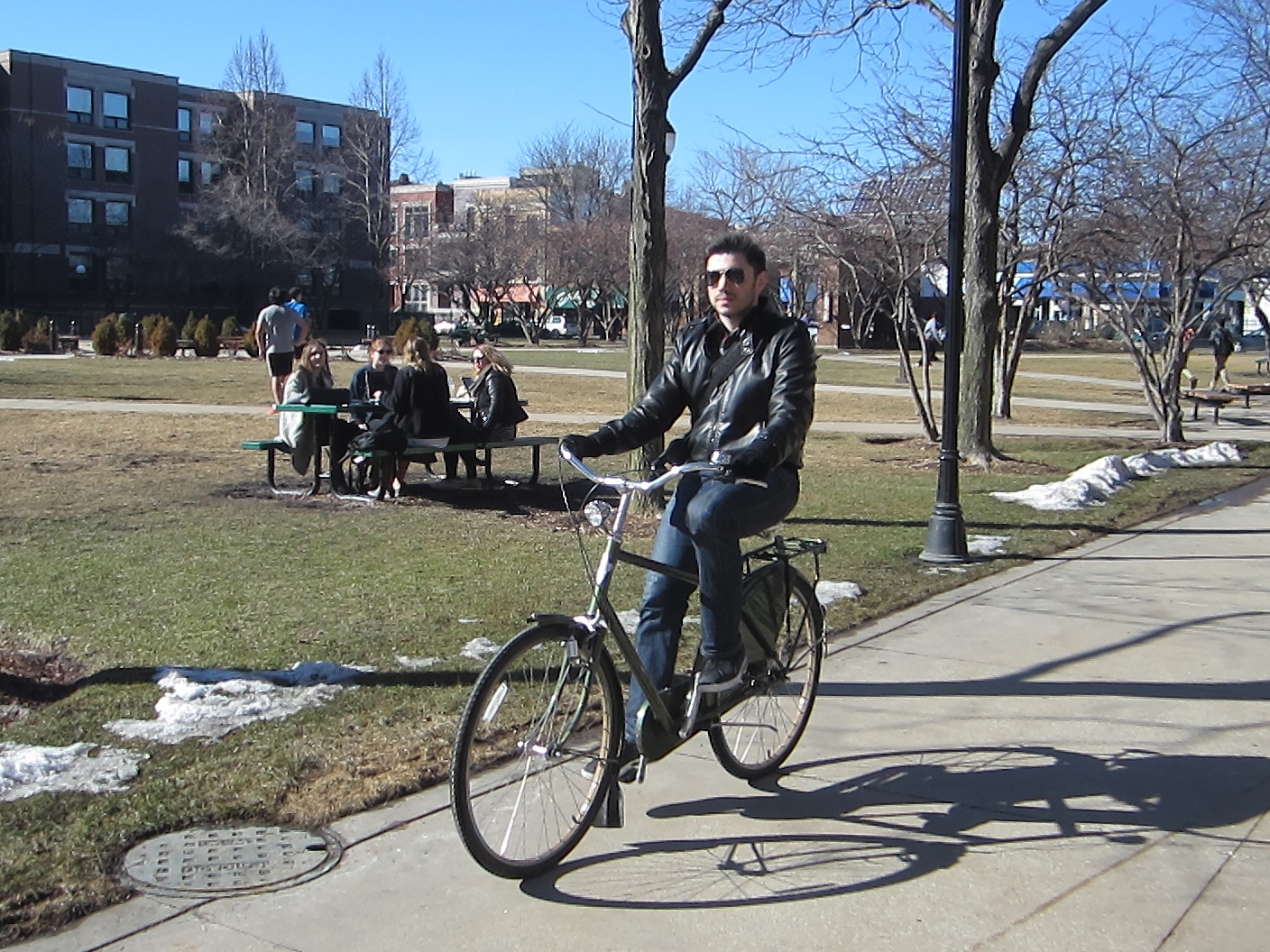 I kind of hate the phrase “bike season.” Thousands of Chicagoans get around on two wheels all year ‘round. Even in January, there’s still something of a bike rush hour on the Lakefront Trail and Milwaukee Avenue. And all you really need to keep cycling through the Chicago winter is a bike with fenders and lights, and more-or-less the same clothing you’d wear to stay warm while waiting for the bus.

That said, it’s been fun to observe how, following another cold, gray, snowy winter, this month’s sunshine and relatively balmy temperatures have inspired countless people to drag their dusty steeds out of basements. Like rivers swelling from the vernal thaw, the city’s bike lanes are starting to fill up with riders once again.

As part of this spring awakening, a dozen different higher learning institutions will be challenging their students, faculty, and staff to try bicycling to school. The second annual Bike2Campus Week takes place from April 20-24, highlighting cycling as a green, cheap, healthy and fun way to get around.

The concept is similar to the Active Transportation Alliance’s Bike Commuter Challenge, in which different companies and organizations compete with each other to record the most cycling trips and win prizes and bragging rights. There are a number of ways Bike2Campus participants can get credit toward earning schwag. They can log their bike trips for the week at Bike2Campus.com, pass the League of Illinois Bicyclists’ online safety quiz, share photos from their commute on social media via the hashtag #chibike2campus, or participate in cycling events on their campus.

“We had ten schools participating last year, and the Art Institute of Chicago was the top dog,” says John Wawrzaszek, sustainability manager at Columbia (and a Newcity contributor), who’s helping to organize the program as part of the Chicagoland Bike 2 Campus Coalition. Divvy provided the trophy, made from a front basket from a decommissioned bike-share vehicle affixed to a wooden pedestal. “We’re trying to do a Stanley Cup thing this year, where the winner will move the trophy around the city,” Wawrzaszek says.

There are some excellent prizes and perks for participants. Divvy is giving two annual memberships to each school, as well as one-day passes, so that newbies can try out the system risk-free. Chipotle is donating coupons for burritos. “Free food is a great way to motivate college students,” Wawrzaszek notes. Planet Bike is contributing reflectors, lights and pumps, while Abus is donating bike locks and messenger bags. Other prizes include Kryptonite locks, Bern helmets, Kozie Prery caps, CSO tickets, a coffee brewing kit from Intelligentsia. For beer-loving bikers, a package from the bike recycler Working Bikes Cooperative includes a helmet, a pint glass, and a koozy.

Each campus will host events like bike-safety clinics, maintenance seminars and social rides. “Our goal is to get students on bikes, make them feel comfortable riding in the city, and make them see that there’s a larger bike community out there beyond just pedaling from their dorm to their classes,” Wawrzaszek says.

Last year, the city of Chicago’s Bicycling Ambassadors gave presentations on safety basics, including instructions on how to do an “ABC Quick Check”—making sure that there’s Air in your tires, your Brakes are adjusted, the Chain is lubed, and your Quick releases are engaged. UIC held an entire bike fair, including an appearance by a pedal-powered record player, built by Working Bikes.

At Columbia, the C4 Cycling Association, founded by a trio of science teachers, provided free tune-ups. Dottie Brackett, who co-writes the stylish cycling blog LetsGoRideABike.com, works as an attorney for the school, so she gave a talk about all-season cycling, plus tips for riding while wearing nice clothes. “She showed that you don’t have to sacrifice your personal style in order to bike commute,” Wawrzaszek says. “It doesn’t have to be all about Lycra.”

On the last day of Bike2Campus Week, students from all the different campuses will converge downtown to pedal in Critical Mass, even though the huge, boisterous bike parade isn’t officially sanctioned by the city. “We’re encouraging people to attend, even though things can get a little weird on the ride sometimes,” Wawrzaszek says. “Critical Mass really highlights how bicycling can be a social activity.”

Wawrzaszek says one of the key purposes of Bike2Campus Week is showing students that they don’t necessarily need a car to get around the city effectively. “When I was in college, my bike was one of the main ways I got to college,” he says. “Nowadays there’s also the U-Pass, and the Ventra card, which you can use on both CTA and Pace. For someone who’s new to Chicago, biking is a great way to explore different parts of town. You’re reducing emissions, you’re saving some cash, and it’s super fun. We want to help people learn good habits that can last a lifetime.”