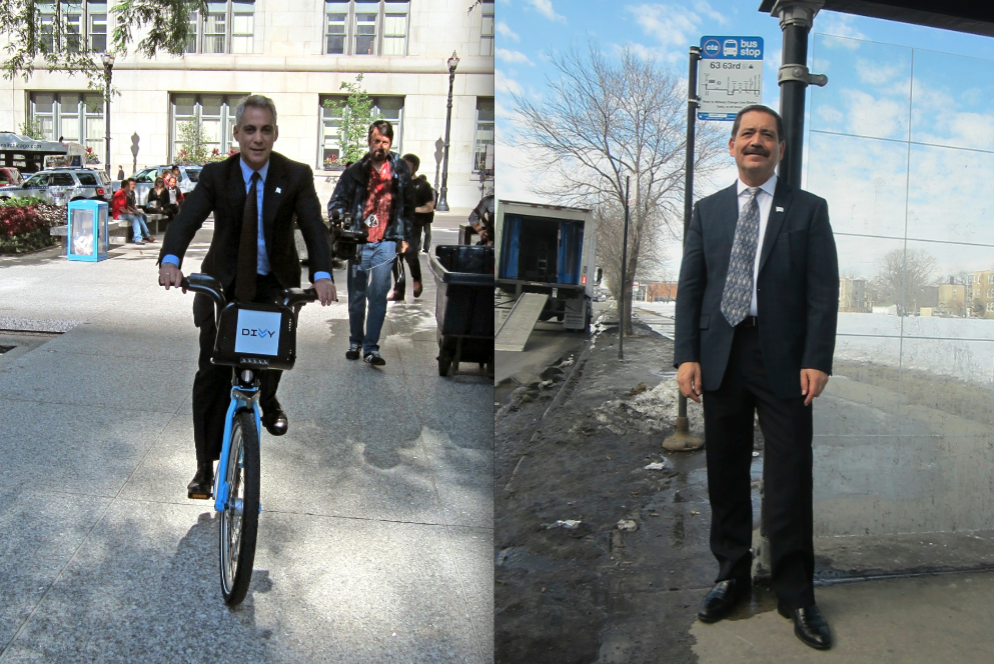 As I’ve discussed with noted Rahm-hater Tony Fitzpatrick, the talented artist and storyteller whose column occupies the other side of this page, there are many issues to consider when deciding who to support in Chicago’s April 7 runoff election. These include jobs, education, crime, privatization, transparency and ethics, to name a few.

However, we shouldn’t overlook the importance of transportation when choosing whether to reelect Mayor Emanuel, or anoint his challenger, Cook County Commissioner Jesús “Chuy” García. The need for a safe, efficient transportation system is a huge factor in quality of life for all Chicagoans.

With that in mind, here’s a comparison of how the candidates differ on key traffic safety, walking, transit and biking issues. Note that this article does not represent an endorsement of either candidate.

Numerous studies in cities around the world have found that, when used effectively, traffic cameras help prevent serious injuries and fatalities. Unfortunately, due to motorists’ resentment, as well as alleged mismanagement of the red-light program under former Mayor Richard M. Daley and Emanuel, automated enforcement has become a political football here.

After coming under fire for everything from questionable cam locations to members of his motorcade blowing lights, Emanuel has promised to modify the program. In early March, he announced he would take down fifty red-light cameras at twenty-five low-crash intersections and install countdown signals at all locations with the cams. “We also have to build the trust in the community and throughout the city of Chicago … that this is going to be operated fairly, with a level of transparency,” he told reporters.

While García previously said he would reform the program, after a recent revelation that a former Emanuel aide helped Xerox win the current red-light contract, the challenger vowed to shut down all the city’s traffic cams. In a recent Newcity interview, I asked if he would consider bringing back the automated enforcement program after an independent study is conducted. “We would consider the best public safety options to utilize in the most dangerous intersections,” he said.

Garcia recently implied that he would water down or kill the plan. “There are a multitude of concerns that have been raised, including limited numbers of car lanes and left turns,” he told the Sun-Times. “This project cannot be approved in its current form, and frankly may never be appropriate for approval.”

Emanuel’s CTA has proposed a $320 million elevated ramp north of the Belmont station that would allow Brown Line trains to travel over the Red and Purple Line tracks. The agency says the flyover would save a few minutes on commute times and allow for greater Red Line capacity in the future.

However, the flyover would require demolishing sixteen buildings in Lakeview, and neighbors have complained about the aesthetics of the rollercoaster-like structure, so there has been fierce resistance to the plan. García told RedEye the project would be “an unnecessary expenditure of taxpayer funds that will generate little return on investment,” so it would surely be kiboshed if he is elected.

Studies have shown that four-lane streets that carry less than 20,000 cars a day can be converted to two travel lanes plus a turn lane with little impact on travel times. Meanwhile, this kind of road diet reduces speeding and frees up space for bike lanes and/or wider sidewalks. Emanuel’s transportation department has successfully implemented four-to-three conversions on streets like South Chicago, 55th, Broadway and Lawrence.

García told me he would continue to do road diets. However, he said a more extensive community approval process is needed. “I’m about people understanding and having an opportunity to have input,” he said. “When you do that, people are more educated about the outcomes.”

Arguably, there has been too much community input on some street remix projects—opposition from Jefferson Park residents deep-sixed the city’s proposal to convert travel lanes to protected bike lanes on an overly wide stretch of Milwaukee. At any rate, it appears that a García administration would be somewhat more cautious about doing road diets.

Emanuel is on track to meet his goal of installing 100 miles of buffered and protected bike lanes within his first term although, disappointingly, the vast majority will be buffered lanes, which offer no physical protection for cyclists. Part of the challenge with installing PBLs has been resistance from some residents and merchants, who’ve objected to the aesthetics, as well as the need to eliminate a few parking spaces at intersections to preserve sight lines.

Installing protected lanes, along with Divvy and the Bloomingdale Trail, is one of the few Emanuel initiatives that García actually approves of, and he told me he would continue building them if elected. However, he said he’d only install the lanes “where there’s good support for building [them].” This suggests that, as with road diets, there might be a slowdown in construction under his administration.

[…] Compare the Candidates’ Positions, Including Transportation […]