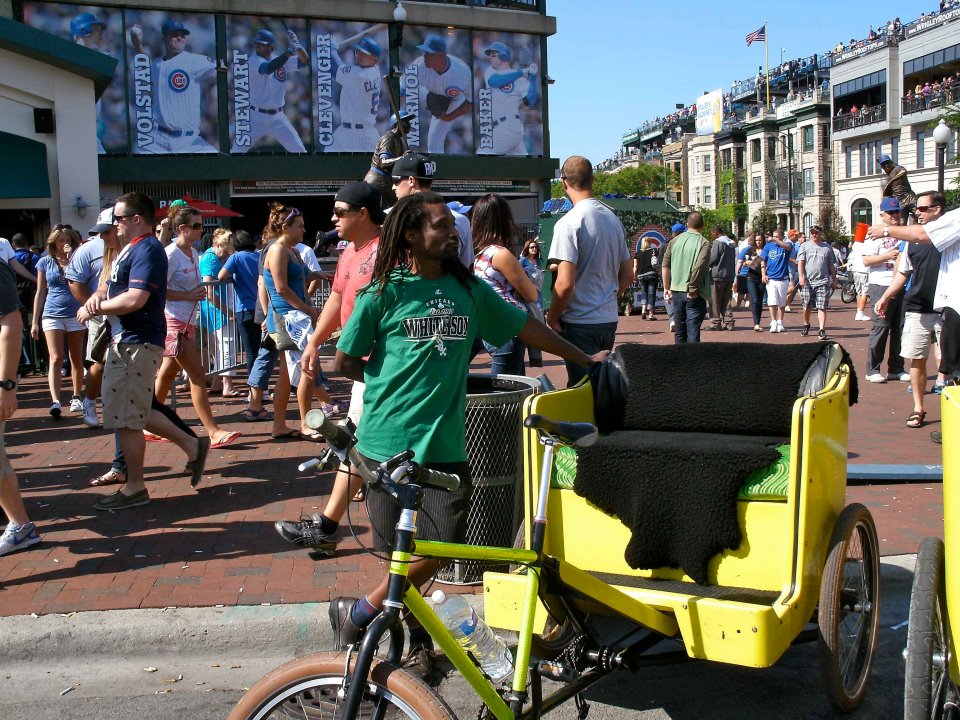 “Some people think pedicabbers are nuisance, but we’re really only here to help people, ” says Darren Hilton, forty-two. A former bicycle messenger, he’s been in the bike taxi business for five years. “As pedicab operators, our job is to give visitors red-carpet service and keep them coming back to Chicago.”

Hilton says Chicago’s pedicab ordinance, which passed City Council about a year ago, is too restrictive, and has led to some of his colleagues being slapped with thousands of dollars in fines. He has received a few $500 tickets himself.

The purpose of the local ordinance was to regulate what some officials saw as a somewhat anarchic industry. The law was introduced by 44th Ward Alderman Tom Tunney, whose district includes Wrigley Field. Downtown Alderman Brendan Reilly pushed to include geographic restrictions: pedicabbers are now banned from State and Michigan, between Congress and Oak, at all times. They’re also prohibited from working in the Loop during rush hours.

A $250 license plate is required for each pedicab, and the number of licenses is capped at 200. The vehicles must be insured and include safety features such as headlights, taillights, wheel reflectors and seat belts. Operators must obtain a $25 pedicab chauffeur’s license, which requires jumping through a number of hoops, including a criminal background check, physical exam and drug test, and they must have held a driver’s license for at least one year.

While Hilton believes it made sense to regulate the industry, he says the city went too far with the geographic restrictions, 200-vehicle cap, and the driver’s license requirement. “The streets we’re banned from are the streets we work best on, because we’re small and maneuverable. Michigan Avenue works magnificently well for pedicabs, and we’re an easy and fun way for shoppers to get where they need to go.”

T.C. O’Rourke, a board member with the Chicago Pedicab Association (and old friend of mine) lobbied for a more lenient ordinance last year. He says it’s ironic that Hilton can’t pedicab legally because he lives car-free and doesn’t have a driver’s license. “He’s super-professional, but he can’t get a pedicabber’s license. Meanwhile, anyone who drives can come in off the street and get one.”

Hilton encouraged me to stop by the Cubs’ season opener earlier this month and talk to other operators about the new law. It was a blustery evening, and there were few bicycle taxis to be seen, but Dale Salzman was hanging out with his rig a block south of Wrigley. A high school teacher, he works as a pedicabber on spring weekends and during the summer. He says he’s in full compliance with the law.

“The ordinance is reasonable, except for the part about having a driver’s license,” Salzman says. “That and the drug test have certainly gotten rid of a lot of people. But when I first started doing this two years ago, it was kind of the Wild West. If people don’t have insurance, that could be a problem.”

A couple blocks west on Southport, pedicabber Goran Arnaut was taking a snack break with a couple of colleagues. A six-year veteran of the industry, he says he was one of the first operators to get a license last year, but says the ordinance is a mixed bag. “On the one hand we are restricted from certain areas—Michigan Avenue and State Street affects us very badly. On the other hand, there are less drivers and less competition.”

Arnaut, a middle-aged Serbian immigrant, credits the new law with getting rid of some bad apples, such as those who rode recklessly or ripped off customers. A few pedicabbers I’ve spoken with over the last year or two have blamed much of this cutthroat behavior on twenty-something Serbs who they say came to the country on student visas. They told me these young people were exploited by ruthless countrymen who charged them exorbitant fees for lodging and vehicle rental, so the students were desperate to make money.

Hilton says the new rules seem to have drastically reduced the number of foreign pedicabbers, but that’s not a good thing. “I think we got too comfortable scapegoating the Serbs,” he says. “I like equal opportunity, and the idea that you can come to this country and work hard and make a living. That window shouldn’t be closed.”

Tunney’s chief of staff Bennett Lawson says the ordinance seems to be having a positive effect on pedicabbers’ behavior. “We used to hear about operators not following the rules of the road, riding in the wrong lanes and blocking sidewalks,” he said. “Since license enforcement started, we haven’t gotten any complaints about pedicabbers. When you require the operators to carry a license and a number, they have more skin in the game.”

According to Mika Stambaugh from the department of Business Affairs and Consumer Protection, there were only forty-six licensed vehicles and thirty-five active pedicab chauffeurs as of April 6. Although bike-friendly 30th Ward Alderman Ariel Reboyras told me a year ago that he hoped the ordinance could be revised to lift the geographic restrictions, Stambaugh said there’s currently no movement to do so.

O’Rourke thinks it’s time to jumpstart the process of fixing the ordinance. “It’s a lot of work to get an alderman’s attention—it can take ten phone calls or twenty emails. But now that the election’s over, we have to pick up our lobbying effort.”