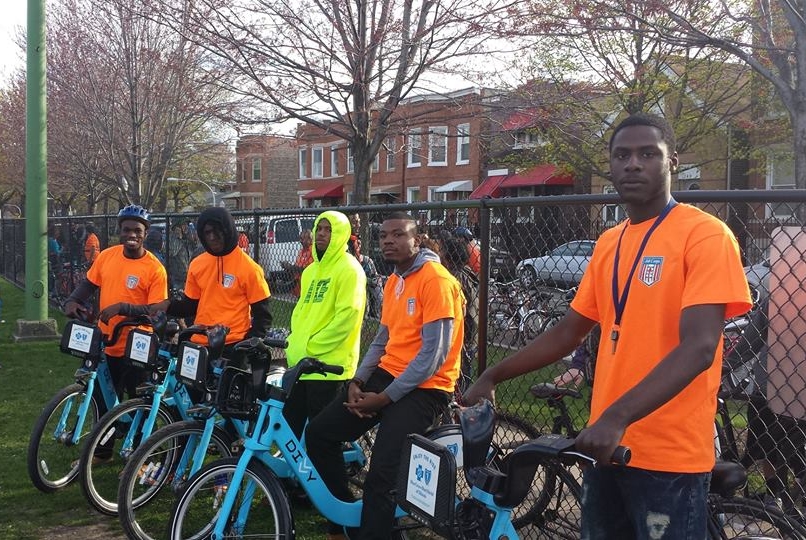 “Slow Roll Chicago is helping to bridge Chicago’s geographic divides, ” says cofounder Oboi Reed. “We’re getting people from all over the city to show up for rides that are not in their neighborhoods.” The group, whose focus is getting more people on bikes in low-to-middle-income communities of color, is putting on thirty-one bike tours this year, mostly on the South and West Sides.

These include neighborhood rides every Wednesday evening during the warmer months, organized with local nonprofits, neighborhood groups, and churches. “These rides are created with input from the people who live and work in these neighborhoods, so there’s a sense of ownership and involvement,” says Reed, a board member and occasional writer for the transportation news website that I edit.

The Chicago rides were inspired by Slow Roll Detroit, which was launched in 2010 by Jason Hall and Mike MacKool. The Motown events take place every Monday night and regularly draw about 4,000 participants for a relaxed, law-abiding pedal around the city. The Slow Roll movement has spread to several other U.S. cities, as well as three Swedish cities, Berlin, and even the city of Slemani, in Iraq’s Kurdistan region.

While Julien is a real estate managing broker, Reed is working full-time at organizing the many rides, each of which involves multiple partners and sponsors, as well as advocacy work and fundraising. He recently graduated from Roosevelt University with a degree in economics, and is trying to parlay his Slow Roll activities into a paying job. “When I graduated, I decided to give myself six months to grow the organization and get paid for it, and not have to find a job that would potentially take me away from this work.” he says.

In addition to organizing rides, Slow Roll Chicago has been involved in lobbying the city for a more equitable distribution of bike resources to the South and West Sides. “From protected bike lanes to Divvy, if we can have more community input and ownership of those projects, people will be more likely to use those resources,” Reed says. The group is also working on launching youth cyclocross and BMX teams.

The weekly Signature Ride Series is the cornerstone of this year’s Slow Roll Chicago agenda. These free tours generally meet at 6pm and depart at 6:30pm. So far, there has been a ride from Edgewater to Evanston, a “West Side Slow Roll Into Spring” that visited Humboldt Park and Logan Square, and “The Conservatory Ride: From the Glass to the Park and Back.” The latter event celebrated the full reopening of the Garfield Park Conservatory, four years after its glass roof was destroyed by a freak hailstorm.

This Wednesday, April 29, SRC hosts the tour “Ride the Waves: Exploring Our Natural Connections from the Chicago River to Lake Michigan. The ride meets at Ain’t She Sweet Café, 526 East 43rd in Bronzeville and will visit Pilsen, Chinatown’s Ping Tom Park and 31st Street Beach.

Next week starts the “Showing Love to Community Bike Shops” series. On Wednesday, May 6, the group will meet at Blackstone Bicycle Works, 6100 South Blackstone in Woodlawn, take a tour of the surrounding neighborhoods and then return to the shop, showcasing the center’s work with youth education and bike recycling. Similar rides take place on May 13 at Working Bikes Cooperative and on May 20 at West Town Bikes, and there will be an “All Together Now Ride” involving all three shops on May 27. Many more weekly rides will be held through October, with details T.B.D.

In addition to the Wednesday night tours, Slow Roll Chicago is hosting a few weekend rides this year. On Saturday, May 2, they’ll lead the ride “Women Breaking Through Barriers,” co-hosted by Women Bike Chicago and Breakthrough Urban Ministries. Saturday, May 30 is “Rolling Into the Future,” a celebration of local high school and elementary graduates, leaving from Tuley Park, 501 East 90th Place in Chatham.

An inclusive aspect of the SRC rides is the availability of loaner bikes. “We realize a lot of people aren’t sold on the idea of biking in the city, and they may not own a bicycle, or their bike might not be in good repair,” Reed says. “We want to remove that barrier.” They’re working on building a fleet of 100 loaners, but in the meantime they’re using bikes provided by Divvy, West Town Bikes and Working Bikes. While they ask for an ID in order to ensure they get the cycles back at the end of each ride, they’ll also let those without IDs borrow bikes if one of the partnering community organizations vouches for them.

On the recent Humboldt Park ride, all thirty of the loaners they had on hand were used by teens who happened to be hanging out in Kells Park, the starting point at Chicago and Kedzie, and decided to saddle up at the spur of the moment. “Jamal and I were blown away by the number of young people who participated,” Reed says.

How can I be a part of this