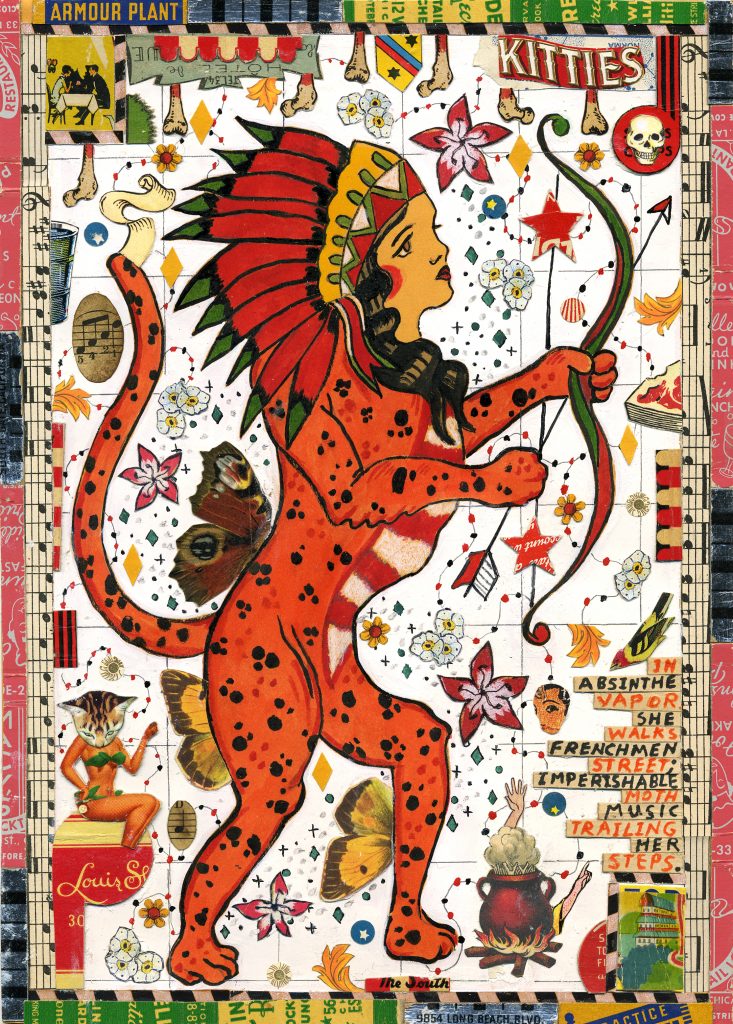 More than thirty years ago, New Orleans crept into my work and she never left. My heart is perpetually divided between my home of Chicago and my home of New Orleans. It is a place for which I have nothing but unconditional love.

When I first got there, it seemed everyone around me was a lot freer than I was, as odd as that sounds. It was a crazily sexy place with grownup women who were frank and forward about what made them happy. It was hot, so there was always a lot of sweaty skin and poetry and music. It was like entering one of those snow globes without the snow. It was Spain and France preserved in architectural amber. It was history. My friend Charlie Neville told me about Congo Square which along with Storyville, was the birthplace of jazz. He also had me read “Up from the Cradle of Jazz,” Jason Berry’s essential history of New Orleans music.

That one visit hooked me. I loved this place with its old bookstores and wooden buildings built to a human scale. The clang of the streetcar from Robert E. Lee Circle; the lazy trip uptown that dropped me off walking distance from the Camellia Grill and their massive breakfast menu. I wanted to draw every joyful thing about that place.

New Orleans is one of those places that ignites my imagination. It is also resilient. It’s hard to believe that Katrina was ten years ago, that furious blankets of black water forever altered the boundaries of this city. That New Orleans, bordered by a lake, a gulf and a river, was nearly erased by them. The Lady persevered, thrived and never surrendered. The Lady bumped and grinded her way back from the watery brink and burns even brighter now.

I love drawing women. The curve of the neck or hip or breast are such a joy and are in great abundance during the French Quarter festival, or Mardi Gras. As a kid, I would do anything to see images of naked women. I still will. I’ve written many times that I could be very happy drawing birds and naked women the rest of my life and that is no shit. At some point I will do it; it will be my version of retirement.

I loved drawing this piece because it is kind of a shape-shifter figure: half cat, half Mardi Gras Woman. I love watching the Mardi Gras Indians and their “Suits of Pretty” on St. Joseph’s Day in New Orleans. I love a town that, for any reason, is in costume for much of the year. The atmosphere of Carnival, and the joy at being free and alive has much appeal for me. I love the profane, pagan ritual of all of it. The swagger and soaring humanness of people and a city alive with music and color and joy.

I consider New Orleans itself a prayer, a plea and a reliquary of otherness—the most necessary city in our country.

How thrilled I was at the success of HBO’s “Treme” a couple of years ago. The pride I felt at watching my friends John Boutté and Paul Sanchez perform that show, along with Tom McDermott and David Torkanowsky and all of the other great musicians in that town. How lovely it was to see the great Wendell Pierce get a role worthy of his talent, and Melissa Leo as well. I felt like the show evinced the “no surrender” spirit of that place, as well as the lurking despair that would manifest itself when one least expected.

I think there was a balance—the ferocious pride of the Mardi Gras Indians, as well as the continuing frustration at trying to effectively police the Crescent City in the face of a crumbling tourist economy and low pay. I feel like this show was rendered with compassion and a contrary kind of spirit that sassed back to strip-mall America: “We are not like you, we are only like ourselves.” There must be a place like this in America where Americans sleep till noon in order to serve the muse. She is a demanding sort and some of us have no choice.

I nearly moved there, that was the plan, and there are moments, like when it is five below zero outside or when the Wee One gets reelected that I regret not moving. But Chicago also has its own proprietary magic that ruins you for other places as well.

So I remain a frequent visitor to the Crescent City and every trip is too short and the time between visits too long. It’s like being the kid outside the candy store, looking in on all that he is missing. New Orleans inspires this kind of ache and wanderlust.

New Orleans feels like liberty to me. Nobody puts on airs. The people there have this music in their head, and they have to dance to it.

Nicely felt, nicely written. I saw THE MIDNIGHT CITY at S-Wolf, which also covered your love for both cities. Ain’t it great there’s a train to and fro!

Another good book is Andrei Codrescu’s NEW ORLEANS, MON AMOUR. Its showpiece essay “My City My Wilderness” celebrates the city with a pungent mixture of observations. Plus it provides a chilling account of killers Antoinette Frank and Rogers Lacaze, a reality check to any romantic excess concerning New Orleans.