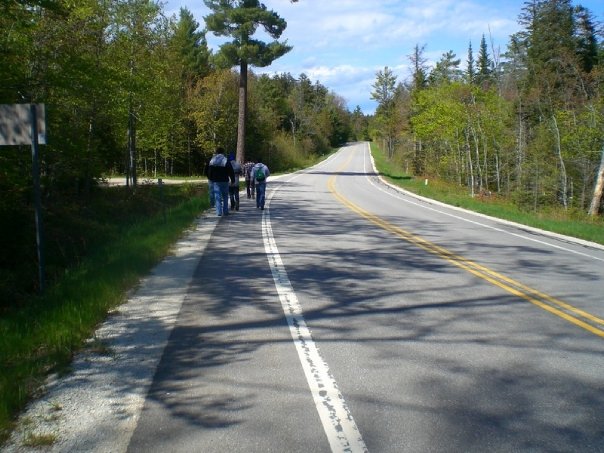 The pickup pulled to a stop just ahead of us.

“Hey, ” the woman behind the wheel said. “You boys need a ride?”

The six of us had spent the day hiking along the Tahquamenon River toward the copper waterfalls Longfellow immortalized in “The Song of Hiawatha, ” but were now exhausted and walking the four miles back to our van along the comparatively flat shoulder of the highway. Guillermo had been jokingly sticking his thumb out every time a car passed—which wasn’t often up in Paradise, Michigan, a town of 500 about an hour south of the Canadian border—but none of them had stopped. We hadn’t thought of what we might do if one did.

We were not, after all, risk-takers. We were six friends from high school who had just completed our sophomore year of college and were on our annual camping trip which had, until this year, taken us to Wisconsin, only a few hours north of where we grew up in suburban Chicago.

There, the serenity of nature was sometimes frustrated by the crowds cooking out and drinking beer, biking the paved paths and swimming in Devil’s Lake. But up here, at the lip of Lake Superior, the natural world seemed still to have dominion over the world of man. It was June, but summer hadn’t made its way to the Upper Peninsula yet. By day the temperatures barely reached forty and at night they plunged to December depths. The evening before, we had sat on our pier watching the sky turn from orange to plum over the Tahquamenon River, and it was almost too beautiful to know what to do with. And later, in the impossible darkness of the North Woods, our campfire casting a small island of tawny light around us, it seemed we were the only people left in the world.

I don’t remember what we said to her, or what we said to each other. The funny thing about taking risks is how pedestrian they often feel when you’re taking them. But the next thing I knew, we were in the bed of the woman’s pickup, clipping along the highway, listening to the Johnny Cash song that blasted from inside the truck’s cab, laughing as one does when they’re doing something they’re not supposed to do.

It only took us ten minutes to go the four miles, but I have spent a long time wanting to write about it, to somehow figure out what it all meant to me. It has been six years since that trip, three years since we’ve gone camping at all. And I see now that it wasn’t the ride that was important, but those days each year we’d spend away from everything. We used to start planning the summer trip in January. I used to take breaks from my final papers during college to look at camping pictures. What happened? We are all still close now, but traditions can fall victim to time—time that’s passed, time that you no longer have between work and relationships and life. So much has changed, but this tradition still feels fresh. It still feels like something we can reinvigorate if we get it going again. It doesn’t feel too far gone. (Eric Lutz)