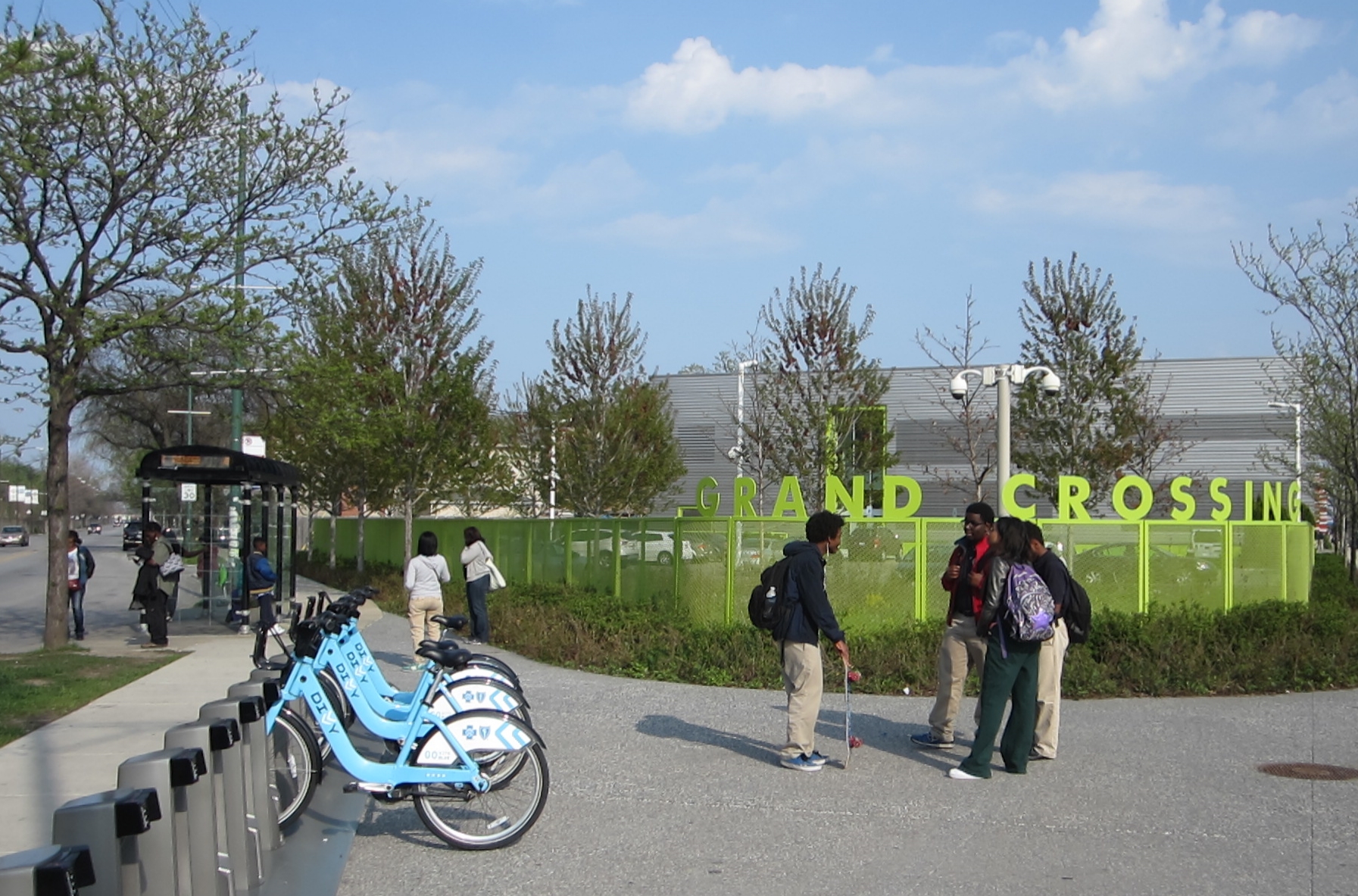 This year’s Divvy bike-share expansion, beefing up the system from 300 docking stations to 476, is moving at warp speed. One-hundred new stations have been installed since mid-April, and the rest should be in by early June.

As Divvy grows, the city is also trying to make it more equitable. After the expansion, the portion of the population that lives in the service area will grow from about thirty-three percent to fifty-six percent, and several low-income communities are getting stations for the first time. Meanwhile, CDOT is working on a strategy to provide Divvy access for residents who don’t have credit cards, and they promise they’ll have a major announcement about this by early summer.

To get a sense of how the stations are working out on the terra nova, particularly in low-income neighborhoods, I set out to pedal the perimeter of the completed service area on a sunny afternoon last week. I began my quest at the southeastern-most outpost of the system at Rainbow Beach in South Shore, a mostly African-American community. There was an eerie fog on the shoreline, and the sound of the waves mingled with birdsongs as I undocked my Divvy.

As I made my way clockwise, stopping at every station along the perimeter to snap a photo, plenty of residents approached me to ask about the system. From small children to seniors, the first question was almost always a variation on “How much does it cost to rent those bikes?” I explained that a day pass is $7, and an annual membership is $75, but you have to be careful to check in your bike within a half hour, or else you start racking up late fees.

Outside Comer College Prep, a nice-looking public school at 71st and South Chicago in Grand Crossing, little kids are using a Divvy station as a coat rack, playing with the bungees and bells, and using the cycles like exercise bikes. Diane Griffin, an adult who’s waiting for the bus, is curious about the giant blue cycles.

Like most people I’ve spoken with, she’s unclear on how the system works, such as the fact that you don’t have to return your bike to the same station you got it from. But after I explain, she warms up to the idea. “I think it’s wonderful,” she said. “It’s good exercise, and it beats riding a crowded bus.”

Pedaling along the system’s perimeter turns out to be pretty comfortable, since the docks tend to be located along designated bike routes, many of which have well-marked bike lanes. I make my way west to Englewood, and then north to Canaryville and Bridgeport where, naturally, a station has been placed near the clout-heavy 11th Ward Democratic Organization office and their designated watering hole, Schaller’s Pump.

I continue west to McKinley Park and Little Village. The latter neighborhood, a blue-collar Mexican-American community, has a high population density, and its vibrant 26th Street business strip is one of the busiest in the city. I’m curious whether CDOT will eventually increase the number of Divvy stations here so there’s the same quarter-mile spacing as the affluent Lincoln Park neighborhood on the North Side.

After a toothsome dinner of carne en su jugo—beef, bacon, and beans in broth, garnished with avocado and radishes—I roll north to Lawndale, an African-American neighborhood on the West Side. Outside the Pink Line’s Kedzie station I meet Jarrett Jones, twenty-three, who works as an English and math tutor. He’s buying a Divvy pass for the first time, making him the only person I’ve seen so far actually using the system.

Jones missed his El stop, so he decided to pick up a bike and ride it to a station near his home. Like everyone else I’ve talked to on this trip, he’s fuzzy on how the system works, so I give him a quick lesson. He inserts his credit card into the kiosk, goes through the lengthy sign-up process, grabs a bike, and rides off into the night. A moment later, it occurs to me that he may not be aware his short ride home is going to set him back $7.

A couple hours later, I arrive at my final destination, the Budlong Woods Library at Lincoln and Bryn Mawr. Its new Divvy station is the northernmost one in the system so far, although the coverage area will eventually extend to Touhy. I’m dog-tired after many hours of pushing the pedals of my comfy—but heavy and slow—steed.

The feedback I got about Divvy from locals on this epic journey was very positive. However, even in Chicago’s most bikeable North Side neighborhoods, it took some time for residents to learn how to use the system properly and for bike-share ridership to grow. In South and West Side communities where biking is less common, it’s clear that simply dropping off stations won’t be enough to ensure the system gets good use.

CDOT knows this, and they’ve already deployed the Bicycling Ambassadors street team to some of these neighborhoods to spread the gospel of Divvy. However, judging from the barrage of questions I got from South and West Siders during my trip, the city needs to ratchet up its outreach efforts a few notches.