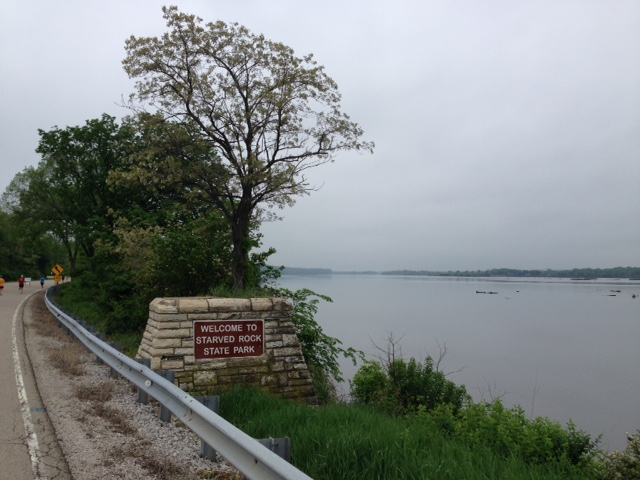 Breakdown: Weather plays a big part in any race, but when that weather involves lightning, it can essentially define the race (as runners of the Illinois Marathon learned last month). And the storm that rolled in Saturday morning during the Starved Rock Country Marathon certainly did that. With a steady rain pouring and lightning striking, the event alert system was raised to black (Extreme) and the race was officially called off. The announcement was made at the aid station at mile 20.6, buses were sent out to collect runners and the race was over. Or was it?

Despite official announcements that the race was cancelled due to weather, many runners (this one included) kept running and experienced a waterlogged, post-storm course that was still heavily supported by volunteers and police officers alike. Buses did make the rounds but there was no forceful collection of runners—it was left to the discretion of the runner to decide what to do. Which made sense as the race wasn’t called until after the storm had already passed.

But aside from the race-defining storm, this still-new race (now in its second year) made a strong showing and a good case for growth and future registrations. Starting and finishing in downtown Ottawa, parking is easy, facilities are plentiful and locals are welcoming. The marathon is still small but the half marathon (which started fifteen minutes after the marathon) is much larger than the marathon. The views may not be as spectacular as advertised—the road through Starved Rock State Park is lovely, but greenery blocks most of the other scenery—but a small, country race is a welcome reprieve from big city marathons. As long as it doesn’t rain. (Zach Freeman)

Price: $100 (with an additional $30 charge for day-of packet pick-up)
Course: The course runs through Starved Rock State Park for several miles, with the most notable section being the bridge leaving the park just after mile fifteen. The sometimes-winding country roads are quiet and friendly—with a few notable hills—and the support is impressive given the remote vibe of most of the race. Oddly enough, running through Ottawa at the start and finish made me wish for longer sections through the quaint downtown, despite the selling point being the views of nature.
Organization (gear check, etc.): There were more support stations (sixteen!) than expected for such a small race (a few hundred registered runners) and they were all cheerful and supportive. The storm didn’t help matters—it’s hard to reach runners spread out across a marathon course during a storm—but post-storm, officials stayed supportive.
Goodie Bag (includes shirt): A bright gear check bag with a bright, yellow race t-shirt in it were welcome swag, but finishers also received a baby blue FINISHER running shirt with the marathon logo on it. Solid for a small race.
Weather: Unfortunately, weather defined this race, with a heavy downpour and a lightning storm resulting in “official” cancellation of the race. The temperature—mid sixties—was nice, though.