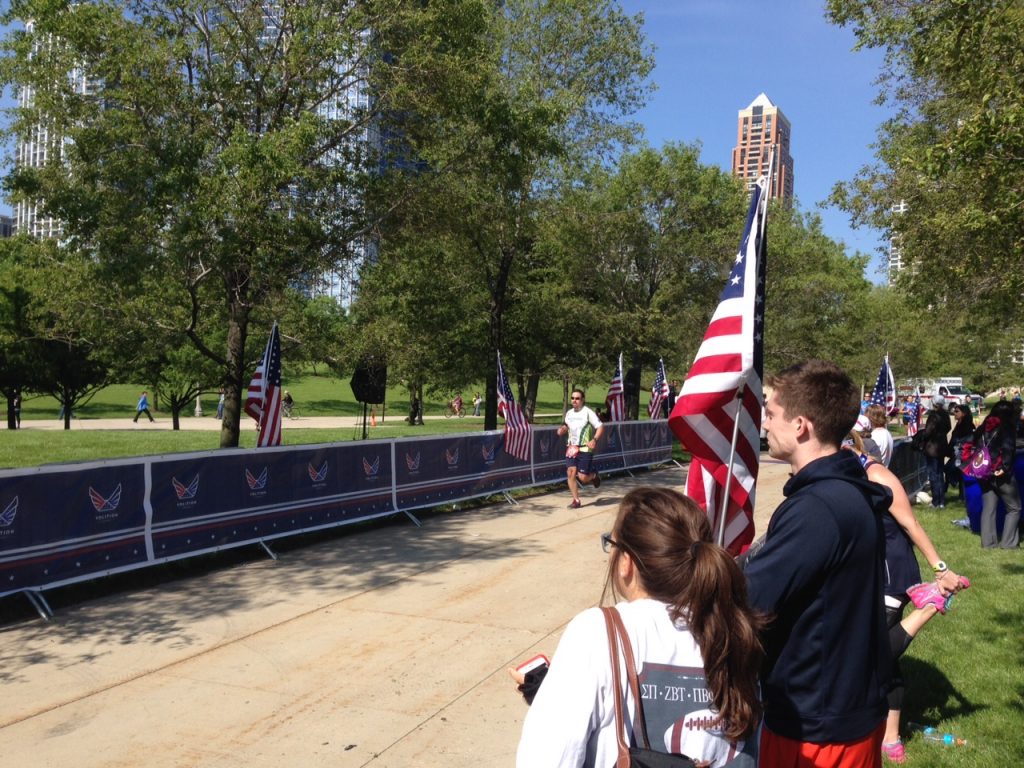 The finishing chute of the Volition America Half Marathon/Photo: Zach Freeman

Breakdown: Billed as a collection of half marathons that is “the first of its kind to honor America through running,” the Volition America Half Marathon series kicks off its inaugural season this year with six races across the country. This weekend’s American-themed races—a half marathon and a 5K—down Chicago’s Lakefront Trail marked the second event in the series (the first was in Boise, Idaho in April). And it was just as “steeped with patriotic distinction” as the website promised.

Opening with an arena-rock rendition of “The Star-Spangled Banner” (described as “the greatest song in the history of the world” by the race announcer), the half marathon started promptly at 7:20 in the morning (with the smaller 5K following ten minutes afterward) and the roughly 600 half marathoners made their way around Arvey Field before hitting the Lakefront Trail and heading south on a mostly open trail before turning around and running north again. Because of the smallish pack, race organizers were able to include the 47th Street hill on the course both coming and going, giving Chicagoans as much hill work as a city course can muster (two hills in one!).

Though each mile was marked with a Volition America sign, not all of them had a timer, and a few seemed slightly off the mark (some too soon and some too late). But the entire course was clearly marked throughout, including a very obvious turnaround sign and a flag-lined start and finish area. Despite the race’s small size, pacers were provided and a lead bike cleared the way for race leaders. Volition America is teamed up with Folds of Honor, a charity created “to honor the legacy of American soldiers killed or disabled in service of our country by helping their children go to college.” Running a half marathon has never felt so patriotic.

Price: $80-$100, with rolling price increases.
Course: Starting and finishing in Arvey Field on the south end of Grant Park, the course made its way around the Shedd Aquarium before heading south on the Lakefront Trail, including the 47th Street Hill both coming and going. For the most part, despite an open course, other runners and bikers weren’t an issue given the small size of the event.
Organization (gear check, etc.): Water stations along the course were placed on both the east and west sides of the trail, allowing for the same smiling volunteers to serve runners in both directions without any hassle. Pre- and post-race organization was smooth and easy, with packet pickups in multiple locations and a large, quick gear check on race day.
Goodie Bag (includes shirt): The brightly colored running shirt is eye-catching, stylish and comfortable and the red, white and blue winged medal (given to all finishers) is hefty and impressive, boasting “A Stronger America at Every Finish Line.” The packet also included a set of Lock Laces. Post-race food included pretzels, bagels, muffins, orange juice, chocolate milk.
Weather: A perfectly sunny day in the high fifties with a light breeze on the lakefront. (Zach Freeman)