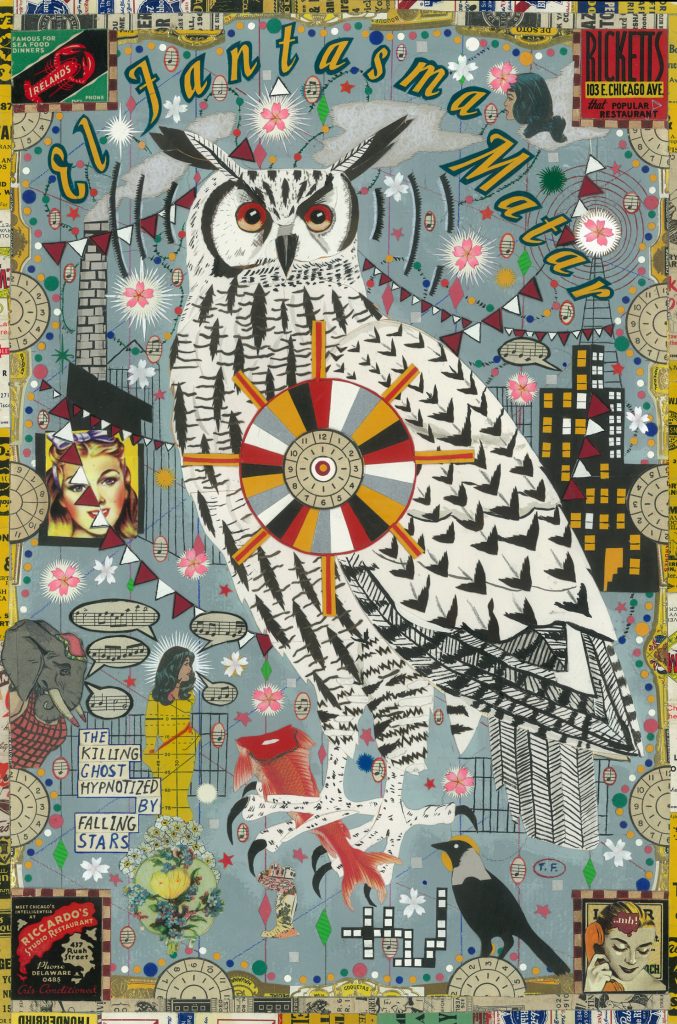 The more I read about owls, the more I realize how paranoid white people have always been. In Western culture, owls are almost always associated with witchcraft  or some other nefarious practice. Maybe it is the eyes; they’ve always weirded people out. The eyes that Athena found “burning with inner light” freaked out the civilized types.
I must admit, when I found the down-covered screech owl, I was intrigued because I thought owls were mysterious and weird. I was not a popular kid, an ill-tempered little fucker who didn’t have many friends; mostly art kids and the other weirdos like me who hung around the pet store and drew pictures. I was thirteen when I found him and my sister named him Oliver. That summer he ate his weight in cicadas and eventually mice. He was not a friendly pet, in fact not really a pet at all, but an orphan. He was a gray screech owl and when he shed his down and his plumage filled in he was a beautiful bird; odd in all of the ways that I myself was.

I didn’t tell my friends about it at first, for fear it might get out and somebody would rat me out to the game warden. He eventually got used to me and associated me with food. He would fly to my fist when I had a mouse for him and as far as teaching him to hunt, there was not much need to. The first time Oliver saw a mouse he knew it was food and from the time he could fly he was an excellent hunter. I told a few of my friends and they would ring the doorbell at all hours day and night to bring Oliver a mouse or a big bug. I would leave his pen open and let him fly around the basement and watch him and make drawings when he was still. Once in a while, I’d catch some flack from my mother if he’d shit on her neat stacks of laundry. Owl shit is nasty and the pellets he would disgorge every day, containing the bones and fur of the last unlucky rodent, were no treat for my mom either.

I was an indifferent student. I didn’t like high school and thought, for the most part, my teachers were idiots; the rare exception being an English teacher named Bill Leeberg who sought to excite us about books and reading and literature.  He would dress up like a baseball player and recite “Casey at the Bat” and his enthusiasm was infectious. He had a way of letting us know that books and stories had something vital about life to tell us. He was special. Another good one was Sister Michelene. One time she caught us sleeping through one of her explanations of political science and she told us to close our books. She looked us in the eyes and told us that at some point we should decide who we wanted to be in the world. She said, “Really decide now if you’re going to be one of those passive idiots who goes out into the world and collects a paycheck and then goes home and bitches at the TV set about the way things are. Don’t let your life just happen to you.”

I thought, “Wow.” Somebody finally told me something that actually means something. From then on, I listened to her and was better for it. She unknowingly nurtured the otherness in me. And I’m grateful for it. And for her.

The rest of my high-school years were spent getting into petty trouble and fighting with the assistant principal who was a slovenly little douchebag who spit when he talked. I had a core of friends who were talented in music or art and we hung out going to movies, caddying for money at the golf course and getting into trouble. I started drawing all the time and began to figure out that this was my hammer and nails.

Owls mean many things to Indian peoples; good and bad. The Navajo think them an omen of death, the Hopi think them as protectors of the dead and their burial grounds.

In Italy, the barn owl is said to possess the malocchio or, “the evil eye” (or as my  paisan friends used to call it, “the shit-eye”) when you eyeball somebody with malice in your heart (and who doesn’t enjoy that once in a while?).

The  ocular peculiarities of owls are what provoke the visceral in people; the large and luminous eyes that seem all-seeing. It is kind of what I’ve always loved about drawing them; there are no other creatures like them. They are …apparitional.

I once issued a fairly thorough ass-kicking over the Spotted Owl. There was a big debate over their habitat in the Pacific Northwest around thirty years ago and I was tending bar in Villa Park, Illinois and one of the great minds at the bar started bitching about “all this fuss over a fucking owl, that is supposed to be extinct.” The TV news had just done a report on the near extinction of this owl. He went on about how some species were “just supposed to disappear from existence, it is natural–it’s what God wants.” So I said, “Why don’t you leave?” He just looked at me and I said, “Maybe God wants assholes to be extinct too. Maybe you should follow the spotted owl off this mortal coil… Fuck-head.” And that was it.

My hope is owls will outlast all of us.