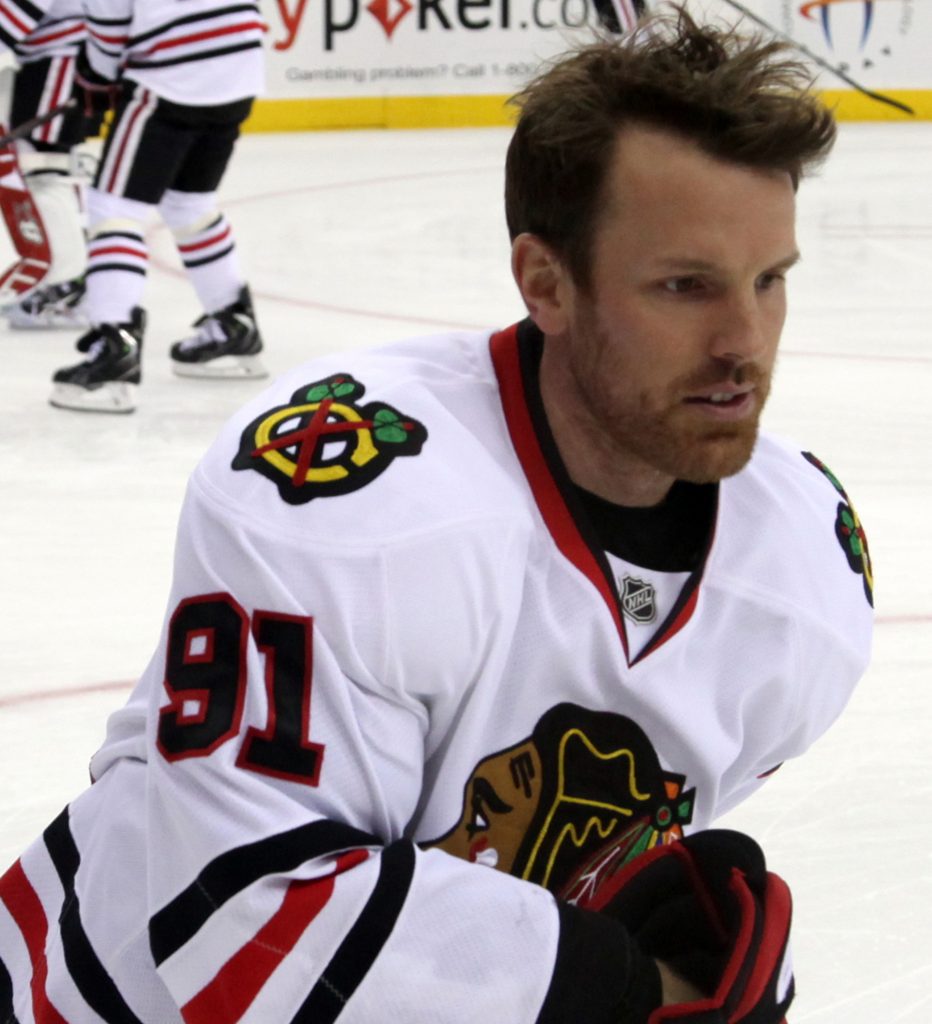 Like many adults self-consciously seeking intellectual justification for their maniacal attachment to a sports team, I maintain that my obsession with the Blackhawks quest to regain the Stanley Cup was largely cerebral, spiritual even—as edifying and inspirational as any philosophical text, and chock full of practical-yet-profound life lessons: Hustle and flow, grind and glide. Never give up, never lose confidence, every new contest is a clean slate. Adversity is the greatest motivator, and it’s never too late—but don’t cut things too close, or you might get smacked down by a random roll of the dice in the form of a floppy puck bouncing off your own player into the net to hand the 2014 LA Kings the golden ticket.

During the last NHL pre-season, I was having a nightcap at a mostly empty West Loop bar when I realized that the three men sitting stiffly at a table across the room were none other than Marian Hossa (my all-time favorite Hawk), Patrick Kane (the greatest stick wizard in hockey) and… some other dude. I realized that this was The New Guy—Brad Richards—who had just been brought in to center for Kane. Richards was a star in his own right, and had sacrificed an awful lot of money (and ego) to sign a one-year deal with the Hawks.

I’m no expert on body language, but the situation at their table seemed crystal clear—Richards and Kane were on an awkward first date, in anticipation of their arranged marriage, and Hossa was there as a sort of… well, wingman. But Hossa soon departed, and left the two Conn Smythe winners staring silently into space. My impulse was to go buy them a round of drinks and see if I could get an inside scoop on the upcoming season, but I am far too respectful a person to ever do something so intrusive. So, I encouraged an attractive young woman sitting next to me to do it instead.

Here’s how the plan unfolded:  She walked to their table, sat down, smiled broadly, and said:

They reacted with poker faces and eyes that showed the faintest glint of weary amusement.

“Yeah, he totally would be,” she said. Kane and Richards nodded at the undeniable truth of this statement.

“What happened to your mouth?” she asked Kane, pointing to the fat lip he received in the game earlier that night.

Richards leaned in, and smirked, “I did it…” Then he and Kane shared a chuckle. In a sense, he was assisting Kane, drawing attention away from him, and then—with a no-look pass, he set Kane up for the glory.

“Who’s your favorite Blackhawk?”  Richards asked her, with a knowing grin.

“Hossa,” she replied, without hesitation.

She walked back to the bar with claims that Kane and Richards exchanged salty glances in response to her answer, but I don’t believe it.

Anyway, one could make an infinite number of arguments about which goal was the most important of the Stanley Cup playoffs—and they’d all be silly. But only one goal made this statement: “We are going to win this!  There’s time left on the clock, but start the celebration now!” And that was the one Kane slid in after receiving a picture-perfect pass from Richards—a perfect picture of what Richards specifically came here to do.

All the Hawks were thrilled to hoist the Cup, but Richards seemed to be the most elated/emotionally charged/vindicated/joyful of all.

“Anyone can always help, but it’s going to go and fit in, and have fun,” Richards said, when he announced his decision to leave a pile of money on the table and join the Hawks. “That’s something very underrated at times, when you have to worry about so many different things.  That’s why it’s such a great fit I believe.”

Not everyone shared that belief back then. Who can argue with him now?