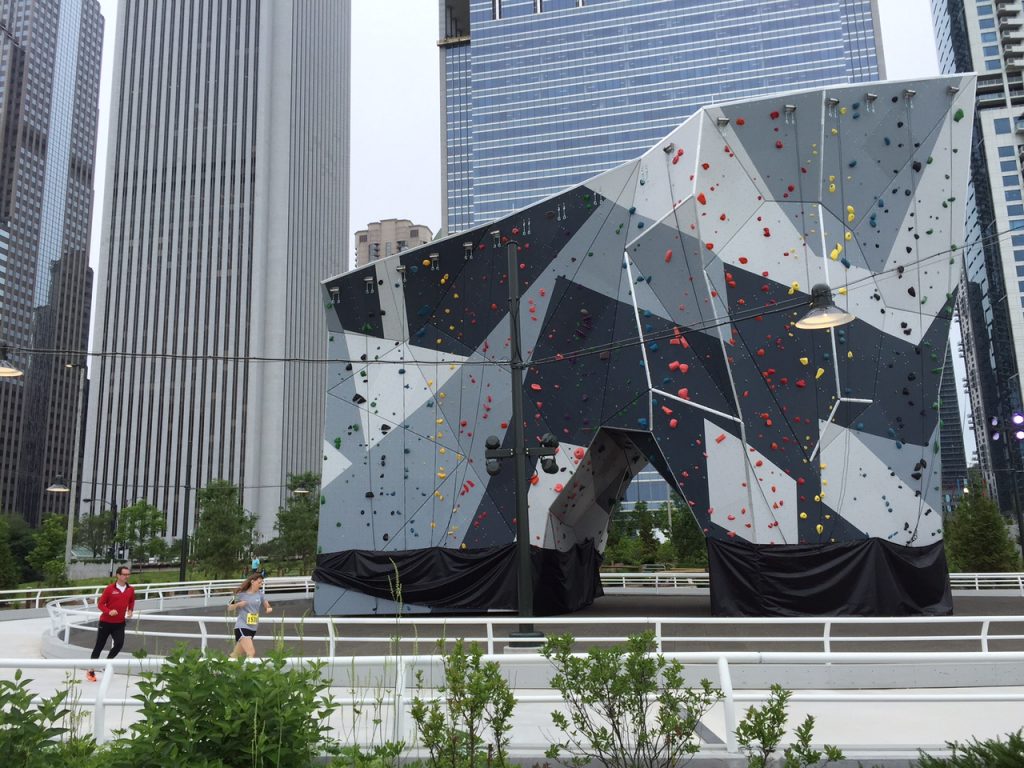 Breakdown: Like witnessing a world-premiere play on opening night, participating in an inaugural race is exciting. Particularly when that race is planned in a popular new location and set at a rather uncommon distance. Saturday morning, the location was the skating ribbon around the climbing walls in Maggie Daley Park and the distance was a single mile. Not only was the promise of being one of the first to run around a new track intriguing (the ribbon has been open but used for skating—both ice and inline—up till this point) but the chance to test the legs on a distance that’s typically reserved for track meets made it especially unique.

CARA hosted the event, with categories for youth, open and all-comers running in sixteen waves spread out over several hours. Just over 100 racers made their way around the twists and turns of the ribbon, racing only against their given wave group (typically around ten runners to a wave) with a miked announcer calling out names and position numbers. The full length of the ribbon meant runners had to circle it five times to complete a mile (organizers rang a bell for the final lap) and the curvature didn’t make full-out sprinting especially easy, but it was indeed, as the CARA website described it, a “memorable experience for racers.”

Cash prizes were given to the top three finishers with a bonus promised for any male who could run a sub-4:00 and any female who could run a sub 4:40 (witnessing those feats would have been worth the cost of admission). The small field of runners and the track-meet-like atmosphere of the race allowed for more camaraderie and spectating than any other race I’ve run in the last several years. Though adding runners would spread the waves out even further, this could easily be an exciting half-day event in future years.

Price: $30 ($20 for CARA members)
Course: Five laps around the newly created skating ribbon in Maggie Daley Park. So many twists and turns are perhaps not ideal for speed work—especially for such a short distance—but the breaking into assigned waves by time and a race announcer calling out names and places made each individual wave race as exciting as the next.
Organization (gear check, etc.): No gear check available, but the event was low-key enough that leaving a bag with another participant felt normal. Organizers rejigged some of the waves on race day and wouldn’t allow this writer to switch to an earlier (slower) wave. A few other runners I spoke with faced a similar issue. If the race expands, clearer coordination will be necessary.
Goodie Bag (includes shirt): A stylishly retro maroon soft tee made up the whole goodie bag, but it’s a nice shirt and an abundance of refreshments were available after running your mile.
Weather: Low sixties—a near-perfect summer morning. (Zach Freeman)