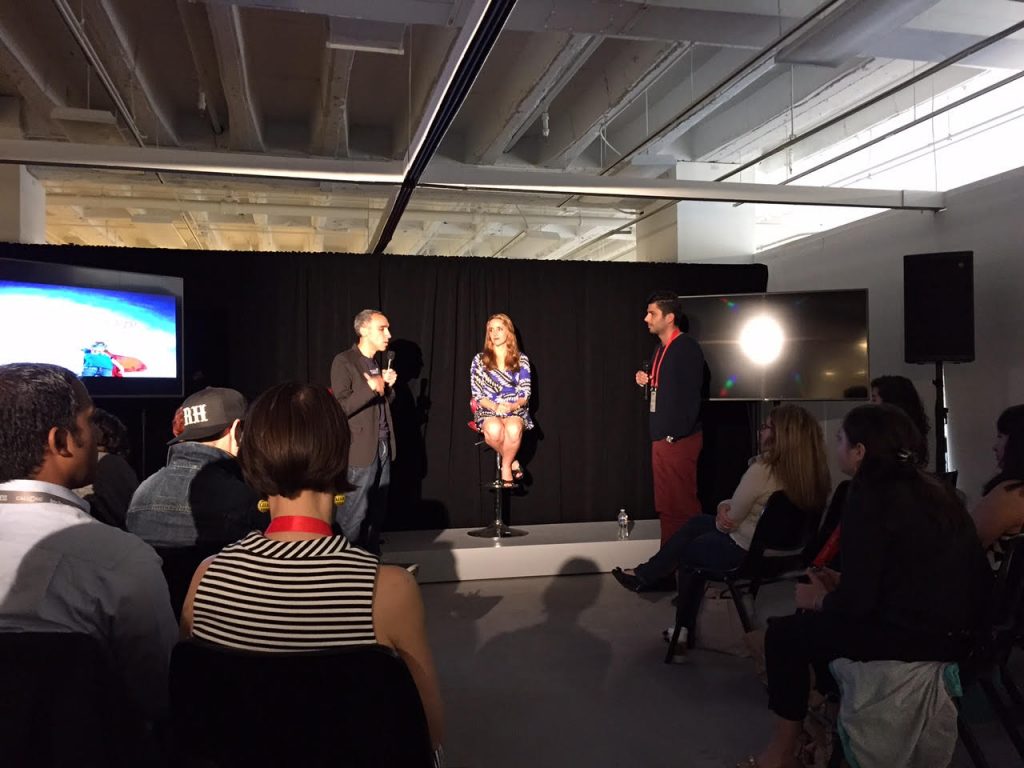 Billed by CEO Katy Lynch as a “week-long celebration of all-things tech,” Techweek is a lot of things to a lot of people, but in terms of this year’s physicality, it is essentially a taking over of a large section of the eighth floor of the Merchandise Mart with dozens of booths, three stages and a teeming mass of badge-sporting “innovators, disruptors, entrepreneurs, developers, VCs and visionaries.” Walking amongst them for the last two days I found it hard to get excited about much of what was being marketed, pitched, sold or displayed to me (except for the free food from gogo—that was pretty easy to get on board with). But maybe that’s because I’m just a grumpy old programmer.

A little backstory: I direct a small technology office for a large college within a large university—we build web applications to simplify manual processes, run reports to provide units with decision-making data and maintain the social media and website for the college. In my role, I not only lead a team, I gather requirements, write code, test, run code reviews and solicit feedback from our users. I also teach a databases class at another university.

I like being involved in all aspects of the software development lifecycle and encourage my team to be as well. In previous positions I’ve worked with teams that divide things up: project managers talk to clients, managers set goals, developers write code. I’m sure it works for some but it always seemed so inefficient and divisive to me, especially when the unfortunate result is that only the developers end up knowing anything about how the system actually works and why.

At Techweek, I felt the confusion coming back to me as speakers tossed out phrases like “technology literacy” without a clear definition of what it implied (Knowing how to code? Understanding social media? Owning the latest wearable? All three?) and representatives running booths seemed confounded by questions about how their software actually works with no one around to help clarify. Why do developers still get hidden away behind the scenes? I know we’re not always the best communicators or the most fun to talk to, but shouldn’t we be out there taking some credit for the stuff we’ve created? Or at least on hand in case some annoying nerd has a question besides “Where can I buy this?” or “How did you come up with the idea?”

If it says anything about the atmosphere that permeates the entire expo/conference, the VIP area (for those paying slightly more than three times the amount of a normal attendee) is nearly twice as large as the largest stage (the T-Mobile Summit Stage) and close enough to it that conversations from it permeated the speaking space. This isn’t a conference about technology. It’s a conference about business and making connections. But to be clear: yes, business and technology are now inseparable. Quick, name a business that doesn’t use technology. Okay, not so quick, think about it for a bit and then name one. Right. There’s not one.

With that in mind Techweek is free to be whatever it wants to be.

Tuesday and Wednesday saw two days of “Grand Tours”—“an interactive tour of the most innovative and compelling office spaces in your city,” meant to let you “exchange ideas with local executives, see where all the action happens, and learn how company culture is enhanced.” Technology.

I watched a session on Friday where Dr. Jennifer Jones (CEO of EntrepreneurShift) talked about mirror neurons, the collective unconscious and using positive affirmations (tied to actions) to improve your current lot. She opened and closed by getting an audience member to come on stage and dance (because technology). Jones is a rousing speaker with an unapologetically positive outlook and, I think, some good advice for everyone (not just entrepreneurs). But her entire session was self-help, not technology.

In the middle of the session she had Sam Yagan, co-founder of OKCupid and current CEO of The Match Group up, fresh off the announcement that The Match Group (Match.com, Tinder and OKCupid) will soon go public. He said cool things like “success is as much about the losses as the wins,” “the person who wants it the most almost always is the one who wins” and told us that all he asks for is that his employees are “smart, work hard and give a shit.” Admirable and interesting. But what’s tech-related about that? How do your algorithms work? What kind of database(s) do you use? Instead, Dr. Jones encouraged the questions to be more “therapeutic” in nature. Someone asked what the deepest grief Yagan had ever experienced was.

Yagan was certainly game and spoke a lot about being “authentic” (for the record, he did seem genuinely authentic) but it all seemed like part of some other conference.

But I’m glossing over a lot here. Actual tech discussions did happen. At the same time as Jones’ talk there was a session going on that was very technology-themed. It was called “The Technical Track.” Pretty spot on. That’s like having a talk about “running” at the Chicago Marathon expo. This stage had various speakers discussing “the challenges and lessons of running the technical arm of a successful company.” It was definitely focused on technologies of various kinds. When I left it around eleven for the Jones/Yagan match-up it was about half full.

On Thursday afternoon I checked out the “Education & Technology” session that Karis Hustad for ChicagoInno captures pretty well. Most importantly, she leaves off the final speaker, Sandee Kastrul, President of i.c. stars, a training program that believes “when young adults focus their talent on both technology services and community impact, their success in both increases significantly.” The reason Hustad probably doesn’t mention her is that as soon as Kastrul started speaking—and the audience realized she wasn’t pitching education or learning apps—they fled in droves. Because the worst thing to mention at a technology conference is technologists.