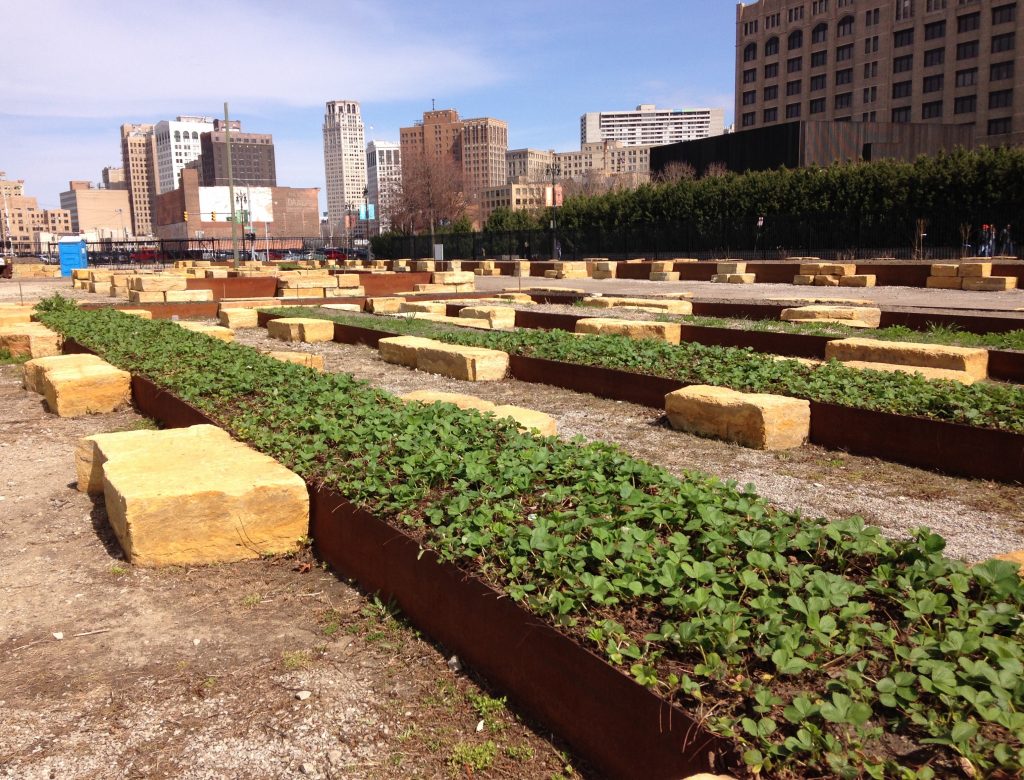 It was an unseasonably brisk day in late April that I donned my denim overalls and headed out to an empty lot on the west side of Detroit to help build a seasonal high tunnel (better known as a hoop house to some of us, mistaken for a greenhouse by many others) on a residential street. When I arrived around 10am, half a dozen workers were milling about or atop ladders, joining the ribcage of a 2,000-square-foot temporary structure that would allow Raphael Ortega to transform the vacant land next to his home into a productive farm three seasons a year. Assuming things warmed up a bit, that is. I rubbed my hands and found myself wishing I’d worn gloves and a wool hat instead of rugged overalls. A rooster crowed in Mr. Ortega’s backyard, unfazed by the overcast day.

The volunteer workday was part of a series of free agricultural education events hosted by the Southeast Michigan Resource Conservation and Development Council. From February to October, the RC&D is hosting free events in and around Detroit for anyone interested in urban agriculture as a potential future career. Financing came from the Natural Resources Conservation Service, and technical expertise came from Michigan State University (which, as a land-grant college, has a highly reputed agricultural program), along with the nonprofit Keep Growing Detroit. A lot of resources were going into the programming specifically geared toward job creation. The high tunnel on Mr. Ortega’s land must be used to grow produce for sale at market. The high-tunnel construction project would take three days, start-to-finish, and anyone was welcome to come lend a hand and learn for any length of time. About mid-afternoon a neighbor, well into her seventies and clad in a Tigers windbreaker, approached a small group of us wrapping up installation of baseboards along the western side of the structure and asked, “Who’s the foreman on this job? I can’t kneel, but I can work.” 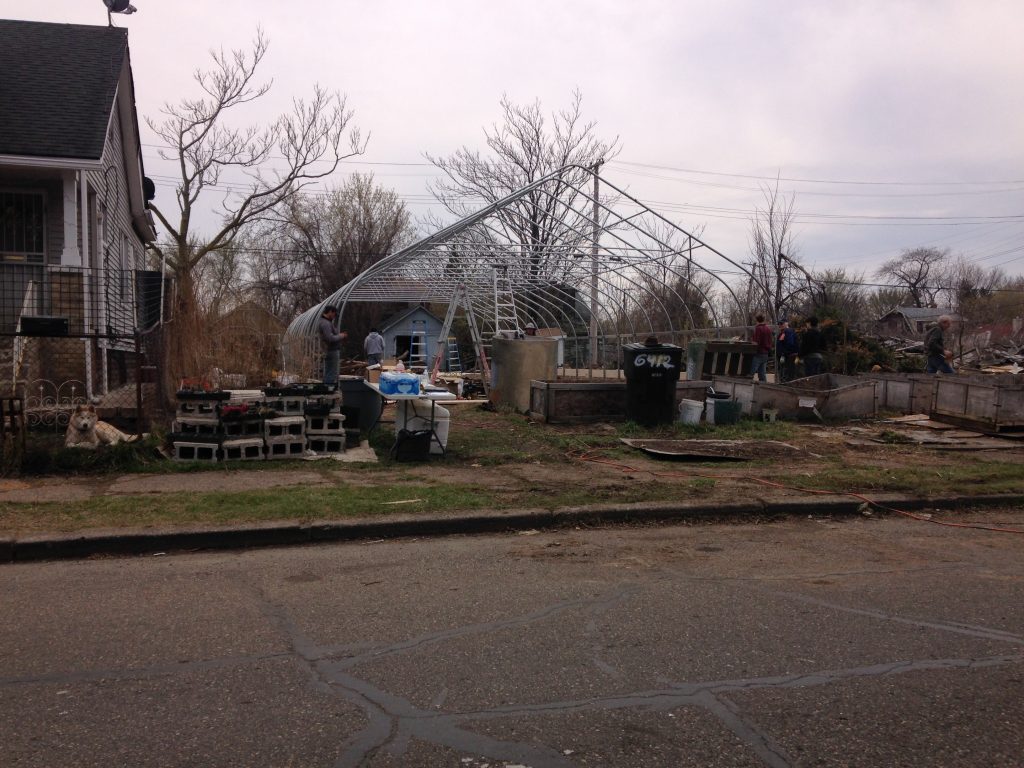 In the 1950s, Detroit had a population of more than two million; battered by riots, arson, the financial crisis, and bankruptcy, by 2010 that number had dropped below 700,000. With a staggering amount of vacant land—about forty square miles—and very few grocery stores, Detroiters started to take control of their food system, growing vegetables and livestock in backyards, church gardens, community gardens and full-scale, multi-acre farms in the city limits. Detroit is now at the forefront of the urban agriculture movement, and is incubating a vibrant DIY culture.

The nexus of that movement is Keep Growing Detroit, a nonprofit that provides educational programming, space at their Grown in Detroit table at the massive Eastern Market, and garden resources—everything from seeds to soil testing to information on land acquisition—supporting nearly 1,400 urban farms in the city limits.

Keep Growing Detroit runs a one-and-three-quarter acre farm on land owned by the nearby MGM Grand Casino, just a stones throw from downtown. After a few hours helping on the high tunnel project, I met up with an old friend who lives in the city to tour a handful of farms. We started with KGD’s Plum Street Farm.

When we wandered into the scenic maze of intensive raised beds, a KGD staff member approached us, hoping we were there to pick up young fruit trees ordered by a no-show urban farmer. Even though we weren’t the people she’d hoped, she was kind enough to give us a brief tour of the greenhouse, the washing and packing sheds that are available to members of KGD’s farmer cooperative, and pointed out raised beds filled with garlic. KGD’s massive garlic crop has grown several seasons with seeds exclusively from that farm. “We’re garlic-sovereign,” she said with a hint of pride. 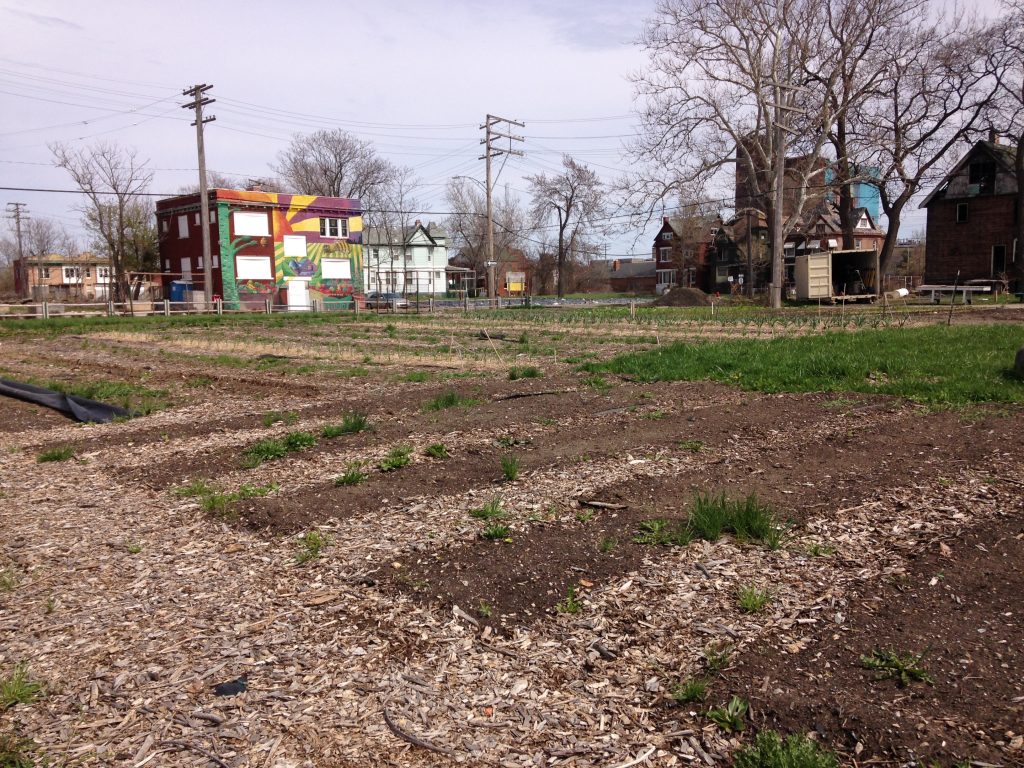 Heading northwest on Woodward Avenue, our next stop was the Michigan Urban Farming Initiative, situated on a large plot of Brush Street with a striking view of the Fisher building. The farm is just one facet of an ambitious vision founded by a senior at the University of Michigan; across the street sits a no-longer-habitable six-unit apartment building MUFI recently purchased to renovate into a community center. Interior construction hadn’t yet begun, but the exterior was an explosion of color against the barren trees, brightly muraled from ground to roof. To the east of the building lay a dozen raised beds surrounding an open space that will one day become a “five-senses” garden for neighborhood kids. It was early in the season so the farm was empty save one volunteer, a middle-aged man so inspired by the project he drives out from the suburbs to help on the weekends. He speculated on future struggles MUFI may have keeping their farmland; the sizable plot is near the planned terminus for the M-1 RAIL streetcar—Detroit’s first public transit project since the little-used People Mover monorail—slated to connect downtown with the fast-growing, high-rent Midtown district.

From Brush Street we drove a little less than two miles northeast and over the border of Hamtramck, an independent municipality that, along with Highland Park, floats like an island in the middle of Detroit. We made a stop at Hamtown Farms, a charming little community farm situated behind the Kowalski Sausage factory on Lumpkin Street. We admired the pawpaw trees just starting to bud and wandered between the community beds. The modest lot was hard-won and came at a steep price; like many urban farms and community gardens, Hamtown was established on public land and farmed with a permit from the city. In 2013, the Kowalski family attempted to buy up the land and turn it into a parking lot. The result was a dramatic bidding war in which Hamtown spent almost $23,000—raised through Indiegogo—to purchase the plots: an unheard of price for land in Hamtramck.

And then there are projects like Hantz Woodlands: 180 acres of abandoned lots purchased by Detroit business mogul John Hantz, who basically wanted to beautify his daily commute. Hantz bought the land—1,300 parcels of it—with the blessing of the governor, but to the chagrin of many Detroit residents, who sensed a speculative land-grab. However, the land was cleared and tens of thousands of saplings have since been planted by volunteers.

Regular Detroiters don’t have the deep pockets of Hantz and the availability of cheap land is a magnet drawing big investors, young artists, and aspiring entrepreneurs to the city alike. It will be interesting to see how Detroit’s farms and gardens weave into the city’s economic comeback.